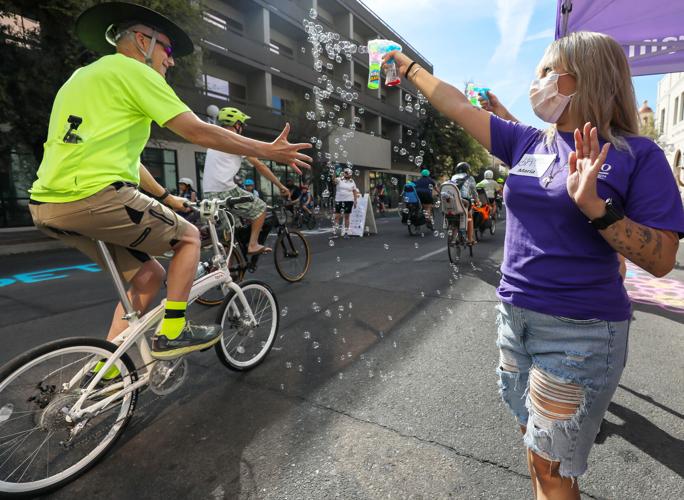 Maria Moreno of El Rio Health blows bubbles as cyclists ride down North Stone Avenue during Cyclovia on March 27, 2022. After being on a pandemic pause for the last two years, Cyclovia returned to the streets of Tucson for a variety of activities, food and entertainment. 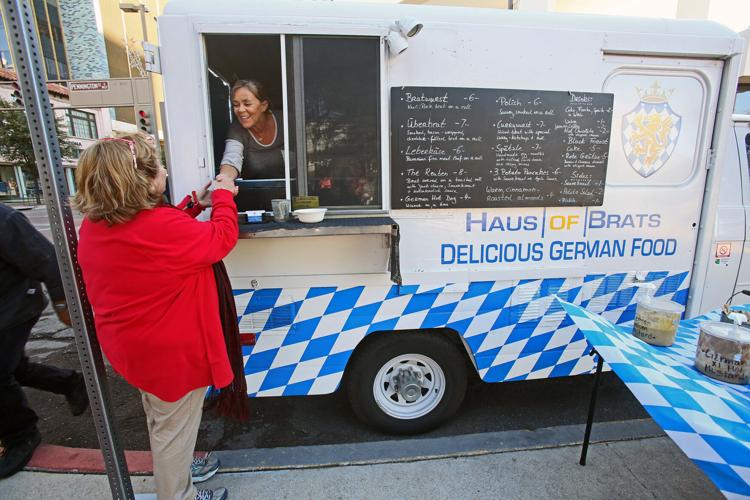 Pick up some traditional German leberkäse from Haus of Brats at the hospitality tent on the south end of Cyclovia. 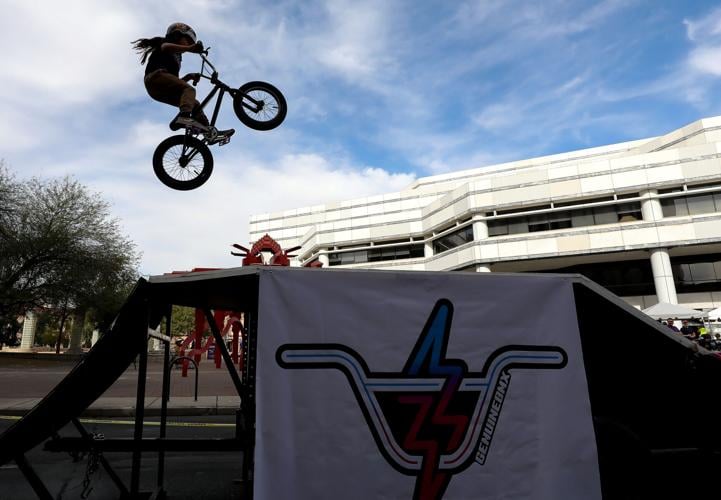 Samuelle Moreno, 8, catches air while performing freestyle BMX along North Stone Avenue during Cyclovia on March 27, 2022. Catch Genuine BMX on the south end of the route on Oct. 30. 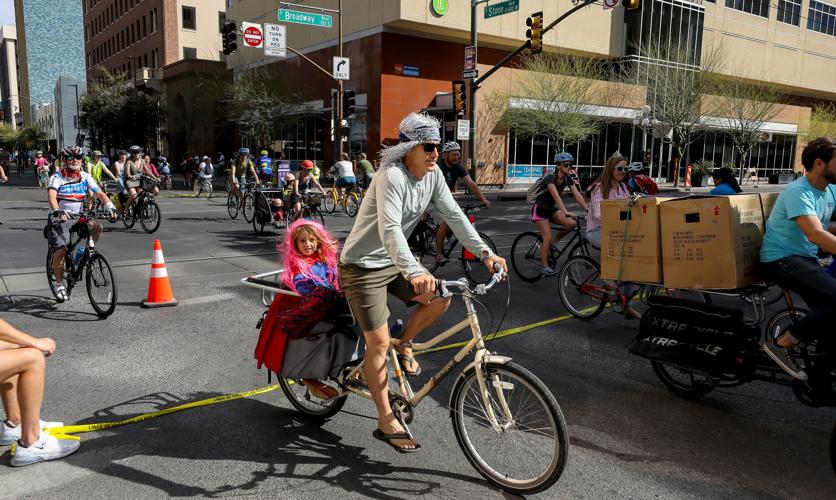 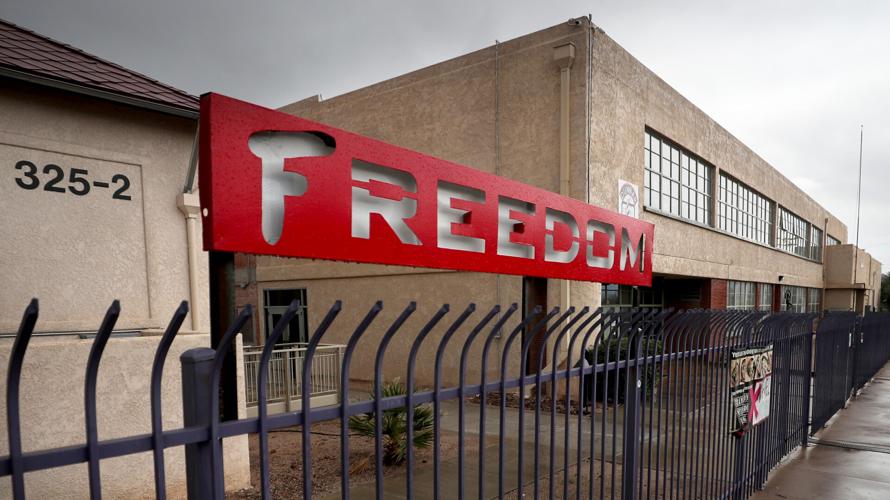 An augmented reality experience will take visitors through the history of Dunbar-Spring neighborhood at Cyclovia on Oct. 30. 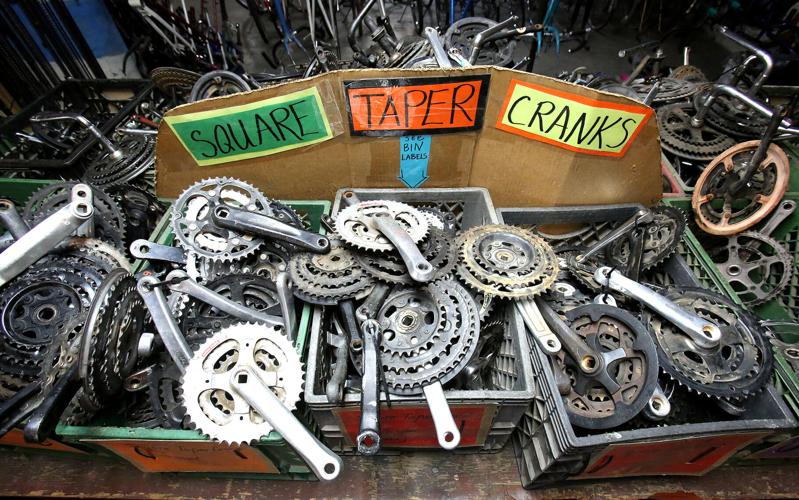 BICAS will be throwing a block party complete with kids activities. The shop and fix-a-flat station will also be open. 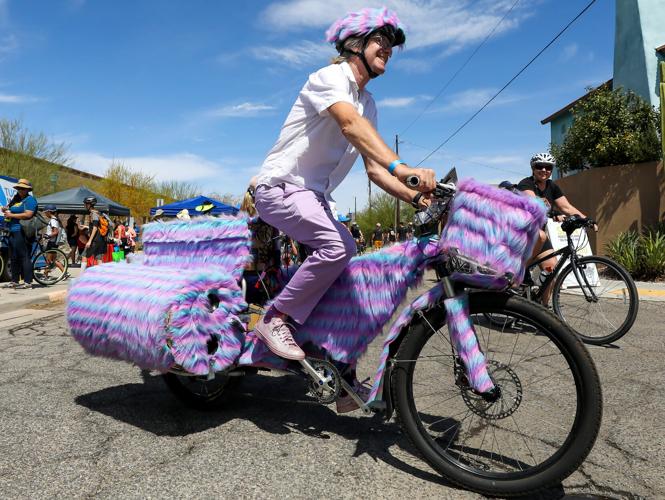 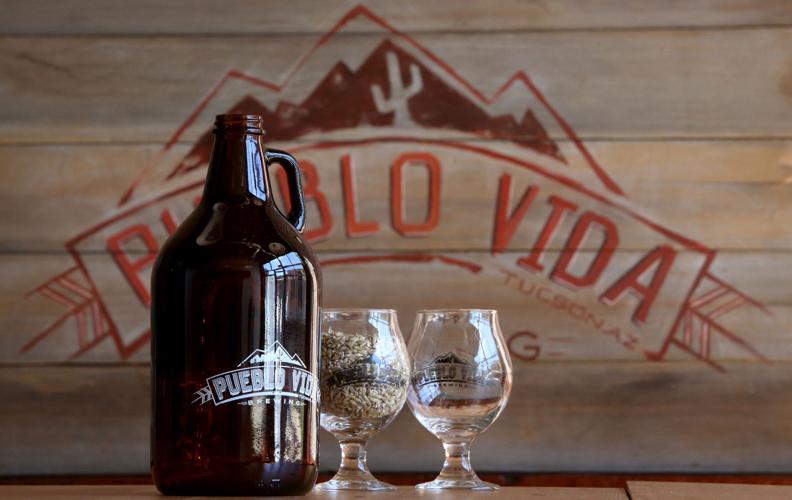 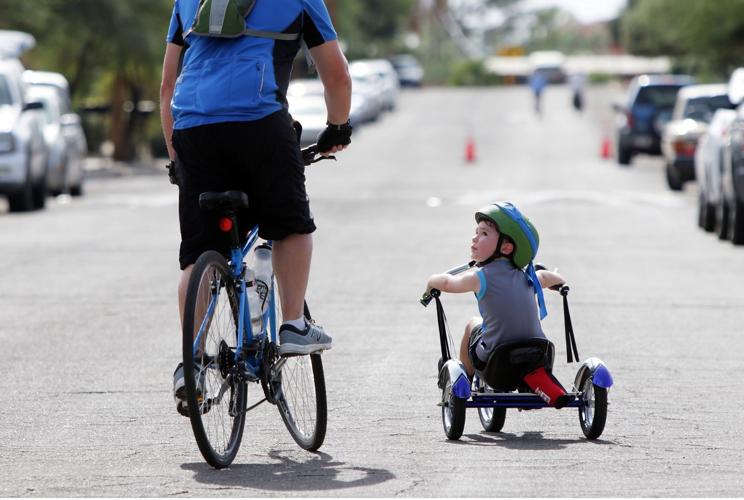 Tommy Bullman, 4, looks up to his dad Tom Bullman as they head towards their car following their ride in Cyclovia Tucson in Tucson, AZ. on October 30, 2016. 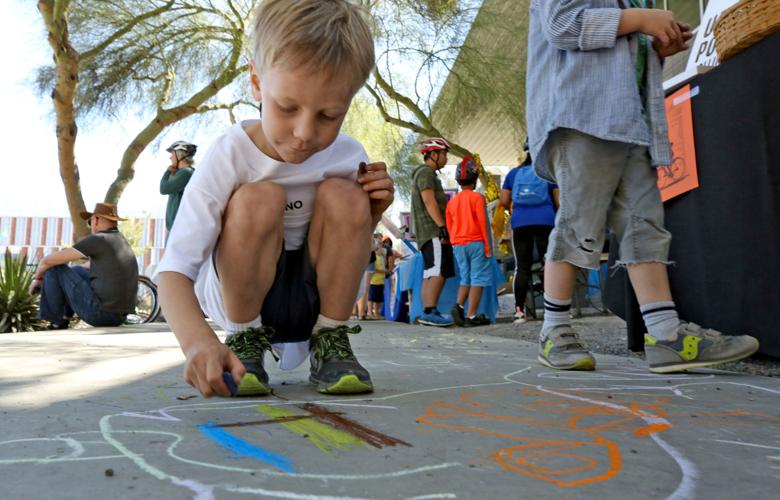 Searching for just the right color chalk to find his inner Picasso, Sam Mitchell, 4, draws on the sidewalk at the University of Arizona Poetry Center Activity Hub during Cyclovia in 2019. 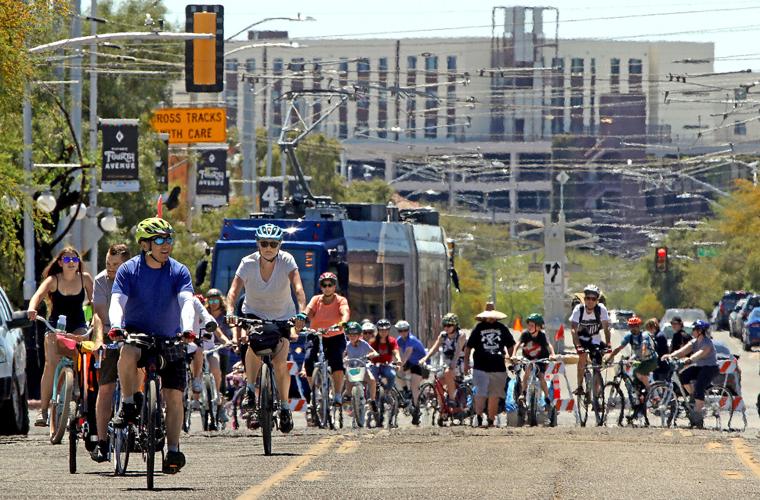 The all-day, car-free party on wheels known as Cyclovia will be forging new paths this Sunday, Oct. 30.

Thousands of cyclists, skaters and walkers will take to the streets from 9 a.m. to 3 p.m. on a new route for the event, running south of Grant Road, north of West University Boulevard, east of Interstate 10, and west of North Fourth Avenue.

The course will bring participants through several historic neighborhoods, including Barrio Blue Moon and Dunbar Spring. Five designated activity hubs will be set up along the route, offering everything from live music and food trucks to medical check-ups and educational experiences. Check out the full interactive map here.

Patricia Schwartz, open streets coordinator at Living Streets Alliance, the nonprofit that puts on Cyclovia twice a year, said there is always uncertainty when the event takes place in a new area of the city.

But, "We've been doing a lot of outreach, trying to connect with folks along the route," she said. "We've been lucky that all of the people we are working with have taken responsibility for their hubs and have really run with them."

Here are 10 ways to enjoy Cyclovia this weekend.

If you've ever been responsible for a child under the age of 10, you know forgetting everything from homework to water bottles to their favorite stuffed animal is just a way of life.

Forgetting to bring their helmets to Cyclovia seems inevitable. But don't you worry.

Living Streets Alliance will be handing out youth helmets, free of charge, at their information stations found along each leg of the route.

Local bike shops will also be at each of the five primary activity hubs offering free bike repair for those who need it.

While cuisine options are not your primary reason to attend Cyclovia, you could definitely turn your day into a culinary exploration of Tucson's mobile eateries while on your big ride.

Food trucks serving everything from Japanese takoyaki balls to Italian street food will be set up at each hub.

Pick up some traditional German leberkäse from Haus of Brats at the hospitality tent on the south end of Cyclovia, then pedal your way to the Old Pascua Hub on the north end for some of Irene’s Ice Cream.

3. Listen to some golden oldies

Longtime KXCI DJ Pepe Galvez, host of the show Sabor del Barrio, will be spinning tunes at the Esquer Park Hub on the southwest side of Cyclovia, music in the same vein of what was once played at the Blue Moon Ballroom, for which Barrio Blue Moon was named.

The ballroom, which opened in 1920 and burned down in 1947, served as a gathering place where couples could cut loose to orchestral tunes from local and touring bandleaders, including Truman McCrea, Erskine Hawkins and Johnny Barringer.

It was also a tour stop for Black bandleaders and musicians such as Duke Ellington and Louis Armstrong, as they made their way to and from Los Angeles.

The Blue Moon Ballroom era was before Galvez’s time. But, as a native Tucsonan, he has heard plenty about it over the years, including from Tucson-born Lalo Guerrero, the “father of Chicano music.”

“Lalo told me some stories,” said Galvez, who plans to play a mix of big band music and Latin tunes from the era. “I would hang out with ‘Big Jim’ Griffith and Lalo and they would talk about the old days in Tucson.”

One of the advantages of Cyclovia's fall route being where it is, is that the headquarters for the nonprofit bike repair and recycling collective known as Bicycle Inter Community Art And Salvage, or BICAS, falls within its borders.

In honor of their close proximity, BICAS will be throwing a block party as part of Cyclovia, which will include rides through a Halloween-themed obstacle course on a “mutant” bike, a trick-or-treat station, a costume contest and face painting for the kids.

In addition to the activities, which will be held in the BICAS parking lot, 2001 N. Seventh Ave., the BICAS fix-a-flat station will be open, as will the shop itself.

5. Cool down with some cold beer

Raise a glass to another successful Tucson community event with a locally made IPA at the Cyclovia beer garden on the south end of the route.

The garden will be serving brews from two local breweries, Dragoon Brewing, one of the elder statesmen of the craft beer renaissance in Tucson with 10 years under its belt; and Pueblo Vida Brewing, a destination brewery if you ever find yourself downtown.

6. Learn more about where you live

You can get to know your city better at the Pima Community College hub, on the south end of Cyclovia, by visiting booths promoting Tucson's different government entities, including Sun Tran, Tucson Police Department, the Department of Transportation and Mobility, among others.

Pima Community College itself will have several booths. One will show visitors the ins and outs of learning to drive a semi-truck.

You'll be able to see the history of the Dunbar-Spring neighborhood, and its connection to Tucson's African-American community in an entirely new way at Cyclovia this Sunday.

The Dunbar Coalition, working with the Arizona State Museum and two College of Humanities centers — the University of Arizona Poetry Center and Center for Digital Humanities — has created a tour that uses geolocation technology to create an augmented reality experience that visitors can see with their phones.

Scan the first QR code at East Second Street and North 11th Avenue, and a virtual image of Samuel Brown, president of the Dunbar Coalition, will appear, reading a proclamation that Mayor Lewis Murphy made about the Dunbar School, Tucson's only segregated school for nearly four decades, in 1987.

“It takes you through history," said Barbara Lewis, vice president of the Dunbar Coalition board. "It is all very exciting."

The tour is part of a bigger project, the result of a $190,853 grant from Museums for America, dubbed Discovering Community in the Borderlands, that will focus on creating virtual exhibits at outdoor locations throughout Tucson.

The Dunbar Pavilion is the first cultural entity to debut this tour experience. Other community groups involved include the Tucson Chinese Cultural Center and Mission Garden.

In addition to the tour, Lewis said the Dunbar Pavilion hub will have an artisan market, food trucks and activities on the basketball court.

Just because you can ride a bike around for a few hours doesn’t necessarily make you a picture of health.

At the Arizona Complete Health Hub, located at Mansfield Park on the northeast corner of Cyclovia, 2000 N. Fourth Ave., you can see just where you stand with a free health screening through the UA Primary Prevention Mobile Health Unit.

A quick stop through will reveal your blood pressure, glucose levels and physical measurements.

There will also be a free mammogram service offered by Assured Imaging to women 35 and older who are without health insurance.

As far as fan favorites go, it doesn't get more entertaining than Genuine BMX, which will be set up near the hospitality tent on the south end of the route.

The group, which raises awareness for BMX racing in Tucson, will have several jumps set up for demonstrations, including a box jump that, according to group founder Saul Moreno, “is about the size of jumping over a car.”

Moreno and his family have been setting up at the last several Cyclovia events. He first became interested in the sport when his oldest son took it on as a hobby.

“I grew up playing football and baseball,” Moreno said. “But once I started seeing the love he had for it, we all got into it. It has been awesome.”

Moreno said Tucson is underrated when it comes to BMX. Several high-profile BMX riders come from the Old Pueblo, including Corben Sharrah, who represented Team USA at the 2020 Tokyo Olympics.

“We are trying to get the kids outside,” Moreno said. “Get them on bikes and trying something new.”

Learn more about the Pascua Yaqui tribe and its history in Southern Arizona at the Old Pascua hub on the west end of Cyclovia.

This festival takes place on 8 porches in a Tucson neighborhood

Tucson Symphony is performing 'Coco' with one of the film's 'stars' ⭐️

You never hear Federico Ramos's voice, but you see his hands and hear him play whenever a character in the Academy Award-winning animated film picks up a guitar. This weekend, he joins the Tucson Symphony Orchestra as the guest soloist for "Coco In Concert — Live to Film."

Map: Time for a tune-up? Get your bike fixed before that fall ride

Tour de Tucson and Cyclovia are returning to Tucson soon, and that means getting your bicycle in proper shape. Find several local bike shops a…