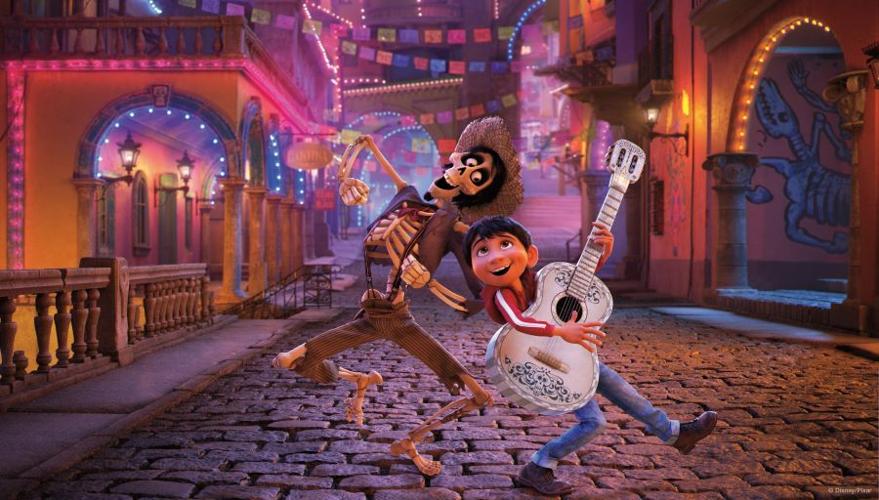 Miguel is on a journey to find his great-great-grandfather and discover his family's most heart-breaking secret in the Disney/Pixar animated film "Coco."

Uruguayan guitarist Federico Ramos is not listed among the acting credits of the Academy Award-winning Disney/Pixar animated movie "Coco," but he's in every scene that features a character playing a guitar.

"Anytime you see any character, whether it is a skeleton or the little boy, grab a guitar, what you see is my fingers and what you hear will correspond with that," the veteran session musician said last week during a phone call from his Los Angeles home. "When I was doing my recording with my guitar, the Pixar people had a bunch of cameras filming the motion of my fingers. Then they animated to my hand."

This weekend, we get to see more than Ramos' hands when he joins the Tucson Symphony Orchestra as the guest soloist for "Coco In Concert — Live to Film." The cineconcert, part of the TSO's "¡Celebración Latina!" series of concerts shining the spotlight on Tucson's vibrant cultural heritage, features the orchestra performing the score while the film plays on a large screen.

Ramos, who has performed the cineconcert with a number of orchestras in the U.S. and in China, was captivated by folklorico and classical guitar from a young age while growing up in his native Uruguay and southern Spain. He studied in the United States and has toured with a number of big-name Latin acts. He also has a strong foothold in Hollywood; in addition to "Coco," he played a number of Colombian instruments for last year's Academy Award-winning Disney animated musical "Encanto."

Performing Michael Giacchino's award-winning "Coco" score with an orchestra is a whole other experience, he said.

Precision and timing are key to successfully matching the music on stage with what is happening on the screen as young Miguel, an aspiring musician, finds himself in the Land of the Dead in search of his great-great-grandfather and the truth of his family history.

"It's not like you could lag or rush here and there. It has to be precise," he said. "The guitar in 'Coco' is the soul."

"It's so elating to just be a little part of this massive wall of sound that all of these instruments are capable of producing," Ramos added. "All these beautiful palettes of sound. Music moves the clock, and it announces a number of things. It foretells and then it resolves some things that the plot by itself would have trouble communicating. The music takes you there emotionally."

Ramos said he advises audiences to bring tissues "because ('Coco') is a tear-jerker."

"I get emotional, and I've seen it maybe 100 times, and it's still moving," he said, crediting "the genius" of Director Lee Unkrich. "He knows how to elicit these feelings in you, and then he reaches into your gut and squeezes and you go, 'OK, OK,' and he will squeeze more."

The TSO also will host an instrument petting zoo in the Music Hall lobby before each concert.

This festival takes place on 8 porches in a Tucson neighborhood

Cyclovia, Tucson's car-free block party, is back this Sunday 🛼🚴‍♀️

Pick up a free helmet for the kiddos, eat tasty food and learn something new about your community while riding, skating and walking in a car-free environment.