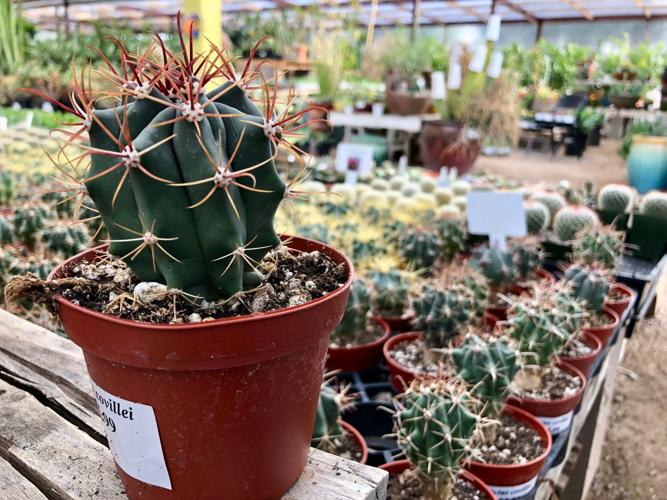 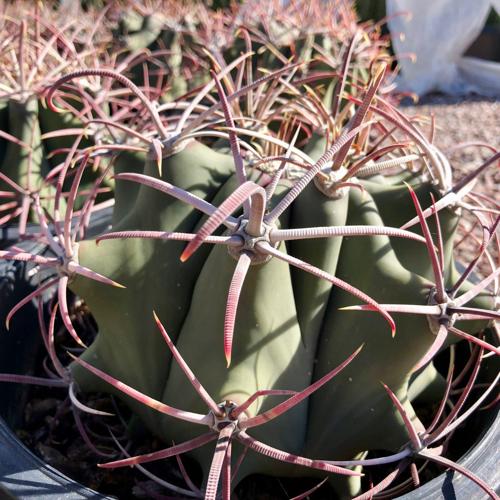 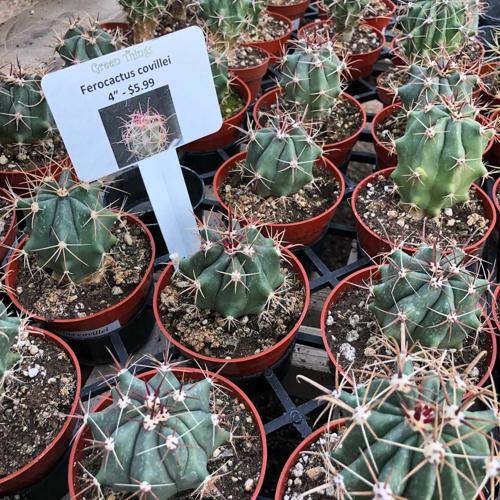 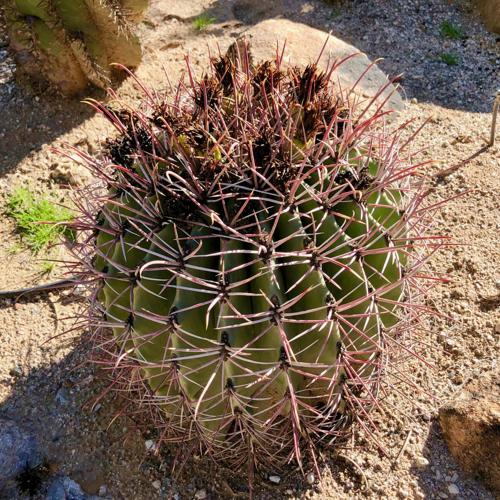 A ferocactus emoryi has bright red blooms in the summer, followed by the appearance of yellow fruit.

It's in the genus name: Ferocactus. Fierce cactus.

And it's in their spines — rigid, hooked and cage-like around the cactus.

The ferocactus emoryi in particular caught our eye (and not just because its scientific name sounds like a Harry Potter spell). Unlike many of its fellow ferocactus friends, this particular cactus does not have any wispy spines. These spines are thick, and they mean business.

Although ferocactus emoryi has several subspecies, we're going to focus on ferocactus covillei, or the Coville barrel. Here's why.

1. Because they have fierce (but kinda cute) pink spines.

Barrel cacti take forever to grow, but when this little one matures, it can get anywhere from 3-4 feet in height and about 2 feet in diameter, says Adam Farrell-Wortman, the horticulture manager at the Tucson Botanical Gardens. They're more compact than some other barrel cacti.

This cactus often has reddish spines, especially when it's young. South of Guaymas in Mexico, you'll notice ferocactus emoryi usually don't have these red spines, according to a "Field Guide to Cacti and Other Succulents of Arizona," although they do grow taller.

The spines — thick and hooked — are how you can tell a ferocactus emoryi from other barrel cacti.

2. Because they grow here.

Ferocactus emoryi is native to the Sonoran Desert. And Tucson is in the northern part of their territory, which stretches almost to Phoenix, Farrell-Wortman says.

The Coville barrel occurs in our stretch of the Sonoran Desert. But between here and Guaymas, you'll find plenty of subspecies hybrids.

3. Because they have beautiful red flowers.

This cactus is all about that pop of color. As you head further south, the blooms transform from a bright red into shades of yellow (just like the spines).

If you want one for yourself, make sure you set it up in lots of sun and soil that drains well. You can find one (possibly under the name ferocactus covillei) at local nurseries including Green Things and 3384 E. River Road and Bach's Greenhouse Cactus Nursery, 8602 N. Thornydale Road.

It's a thing of beauty, despite its fierce exterior.

Cactus of the month: 3 things you didn't know about the Christmas cholla

A native Christmas cactus for your collection

Some people think of a cute, roly-poly critter when they say hedgehog.

Saguaro flowers are here! 10 things to know about this special desert bloom