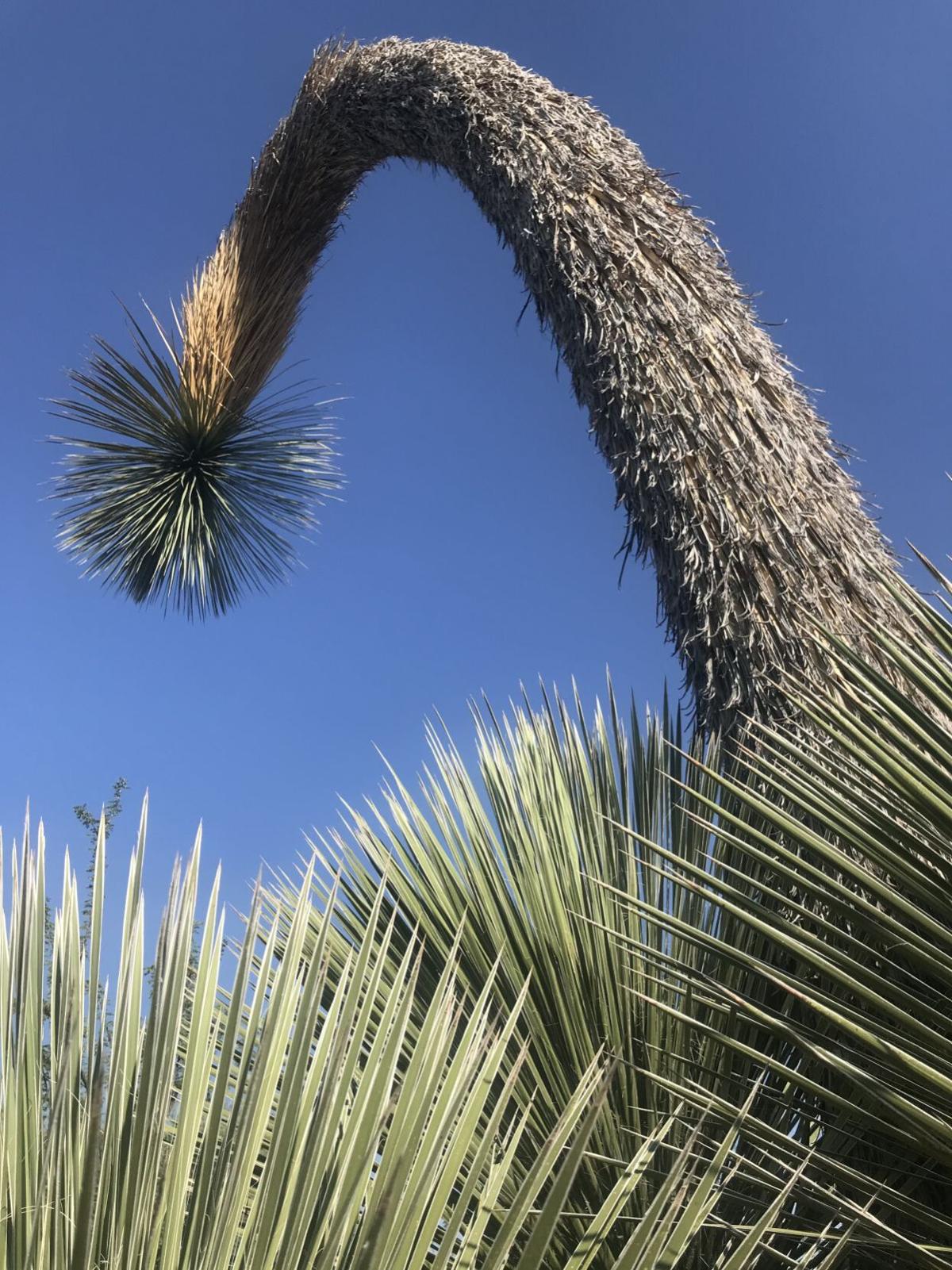 The nation’s largest soaptree yucca plant, west of Oracle Road in Catalina, is at risk of losing its title after its stalk began to droop. 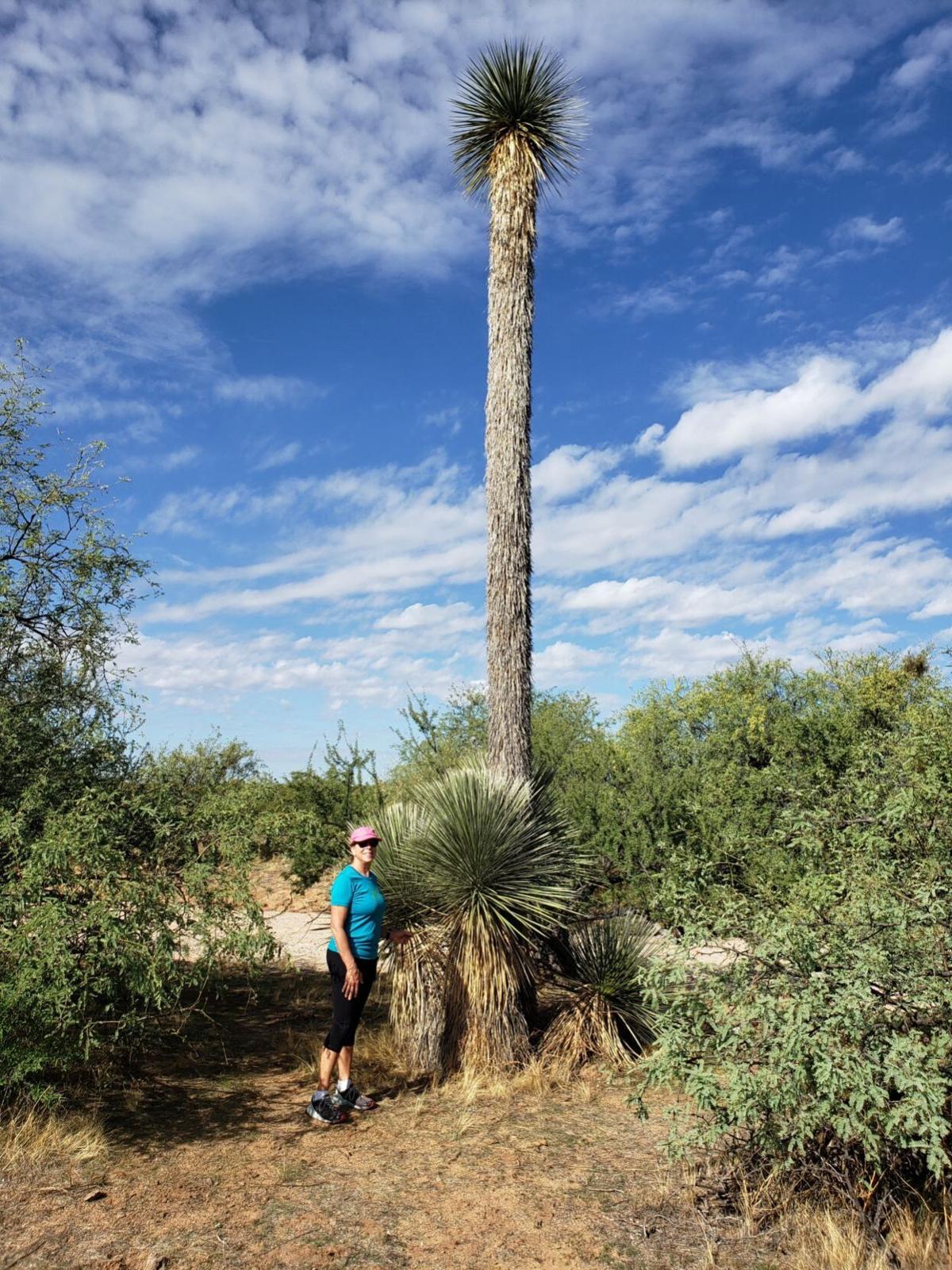 Oro Valley resident Susan Roessler poses next to the national champion soaptree yucca back when it stood straight and tall in October 2019.

If 2020 is getting you down, you’re not alone. Even a champion is withering under the weight of this trying year.

The largest soaptree yucca in the United States used to stand stock-straight at the edge of a wash west of Oracle Road in Catalina, its unusually long, bristled stalk rising almost 30 feet in the air. Now the record-holding plant is seriously stooped, prompting experts and admirers to worry about its future.

Kim Roessler and his wife, Susan, can easily see the yucca from their house on Big Wash Overlook Place, about a half-mile away — or at least they used to be able to see it, before the top of the plant folded over.

The recent retirees from the San Diego area spotted the towering yucca after they moved into the neighborhood in 2019. Their interest in the plant only grew when it was featured last September in an Arizona Daily Star story about Arizona’s champion trees.

The Roesslers have hiked down to the yucca a half dozen times over the past year, usually stopping to take photos of it with 5-foot-4 Susan standing nearby for scale.

In late July, they noticed the stalk had begun to droop. When they went back early this month, the top of the plant was bent like a fish hook pointed at the ground.

“It hasn’t gotten any worse since then, but it doesn’t look good,” Kim Roessler said.

It’s unclear if there is anything to be done about it.

Jon Orona is an urban forestry specialist with the Arizona Department of Forestry and Fire Management. He is also Arizona’s Magnificent Trees coordinator, which puts him in charge of the state’s official list of its most massive trees and shrubs.

When he heard about the slumping soaptree late last week, he sent out an email seeking guidance from some experts in the field. The answers he got were occasionally funny, but not terribly encouraging.

“Clearly this thing is depressed by the non-soon,” one arborist wrote, referring to this year’s disappointing lack of summer storms. “I’d give it a healthy drink and maybe a dusting of Cialis.”

“Yeah, seeing her slump is a bit troubling,” another arborist replied. “Unfortunately they typically don’t straighten up.”

Dick Wiedhopf, president of the Tucson Cactus and Succulent Society, offered the most detailed reply:

“Actually it looks normal in terms of life cycle. It looks like it has sent up a number of new shoots that look vigorous,” he wrote. “The tall main stem will probably die in time, but you have this new growth which will live for decades. I don’t think there is much to be done with this plant except to enjoy.”

The one west of Oracle Road was declared the largest of the species in 2016 by the nonprofit conservation group American Forests, keepers of the National Register of Champion Trees.

Arizona is home to 58 national champions. Eight of them can be found in Pima County, including the soaptree yucca at the edge of Oro Valley.

There’s nothing in the rules that prevents someone from trying to nurse a stricken record-holder back to health.

In fact, the owner of a champion tree is eligible for a $1,000 grant to help pay for work aimed at extending the life of the plant, said Jackie Lyle, a horticulturalist and certified arborist who serves as a coordinator for the state’s Magnificent Tree program in Southern Arizona.

Unfortunately in this case, Lyle said, the yucca is on state land with no one in a position to take ownership of it. And what’s happening to the plant does not appear to be life-threatening. Lyle said the tall stalk will probably continue to deteriorate and eventually fall over, but the rest of the yucca should live on — even if it no longer merits champion status.

“Mother Nature can be mean to these trees,” she said. “They’re often dethroned,” sometimes suddenly, by powerful storms, severe droughts or other natural calamities.

Lyle expects the sagging succulent to remain on the list of champions for now, but it could lose its title after its next official measurement or if something taller is found to take its place.

Roessler hopes something can be done to save the standout soaptree before that happens.

“We see this yucca from our home, and don’t want to lose such a special plant,” he said. It’s “part of Arizona’s special nature.”

Along a wash west of Oracle Road near Catalina State Park, a soaptree yucca juts from the de…

Do you have an abundance of prickly pear fruit in your Tucson yard? Here's what to do with it

It's prickly pear harvesting season in Tucson. We talk to two experts for tips on harvesting the fruit, preparing it and cooking with it. Prickly pear margaritas, here we come.

There are lots of Tucson ways to help others during the COVID-19 pandemic in Arizona. Community members can write notes to health care workers, plant a pollinator garden, volunteer with the Community Food Bank and more.