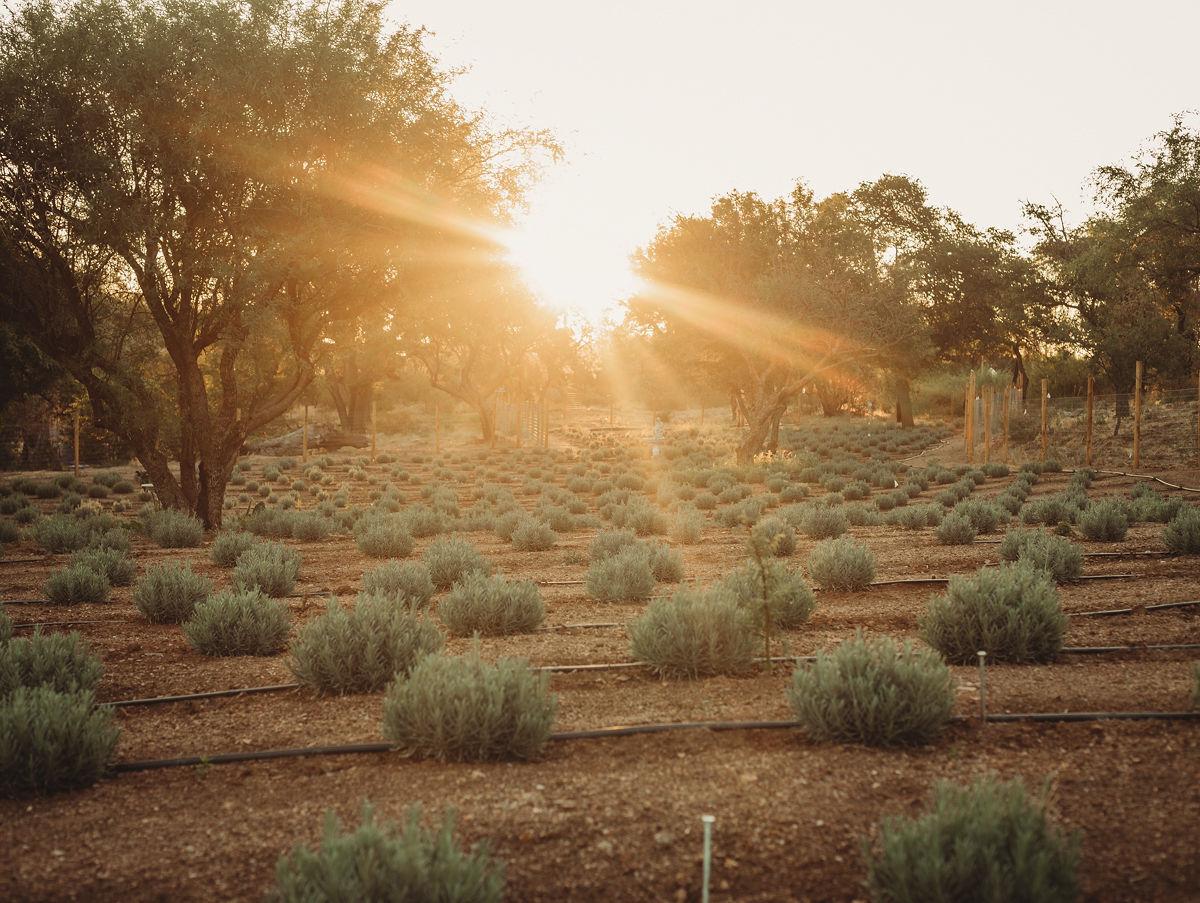 The new property for Live Under the Oaks Lavender Farm is about 10 acres. 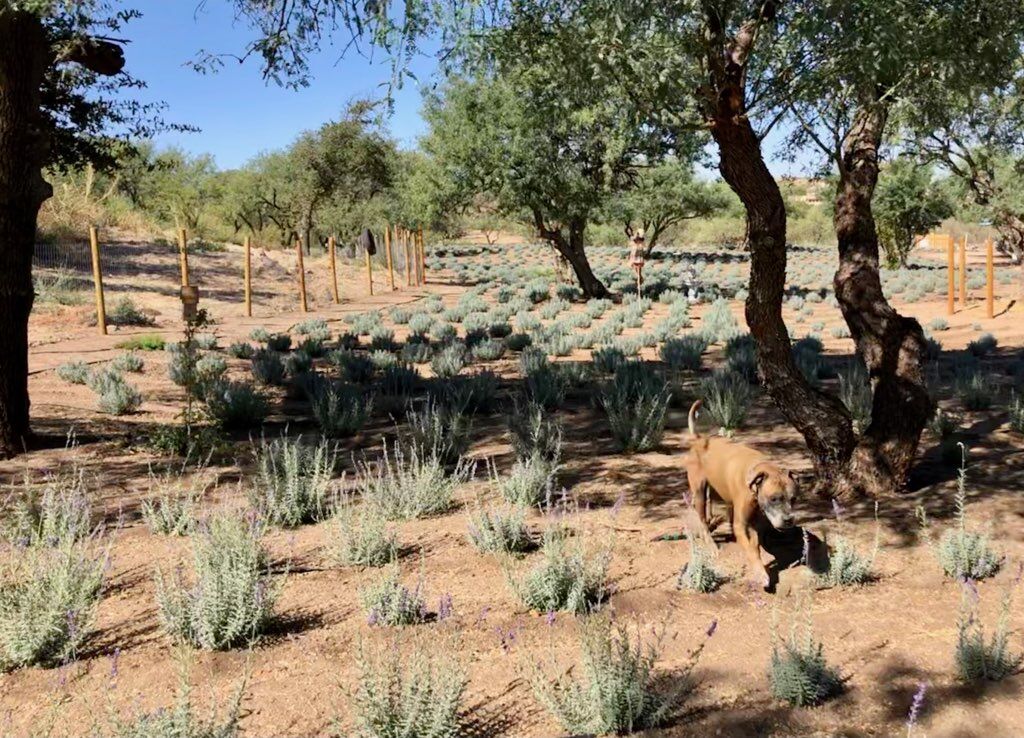 Life Under the Oaks Lavender Farm has 3,000 lavender plants. Most of them will bloom next summer. 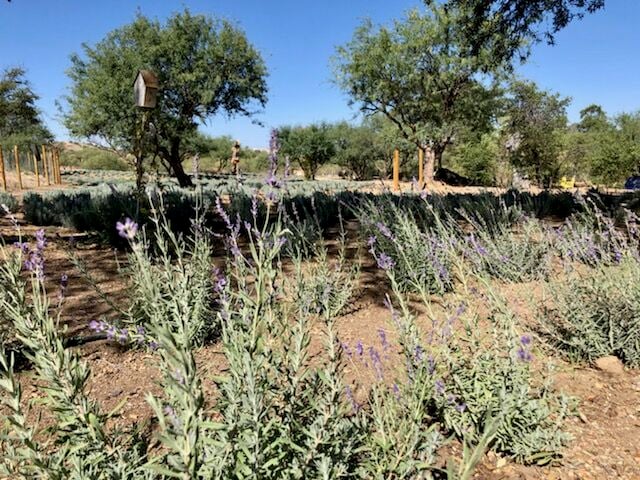 The lavender field at Life Under the Oaks Lavender Farm's new property was planted May 2020.

This month, you'll again be able to stroll under oak trees and wander through southern Arizona's very own lavender farm.

Except this time, Life Under the Oaks Lavender Farm is at a whole new location, just off American Avenue in Oracle.

Carolyn and John Blair purchased the approximately 10-acre property a year ago to expand the dream that began on their much smaller Oracle farm.

The Oracle farm — with about 2,000 lavender plants planted in May 2018 — closed to the public in summer 2019 because of neighborhood restrictions on business operations, John Blair says.

Because of the lavender field's popularity, the couple decided to take a chance and grow into a bigger space while still personally maintaining the plants at the original farm.

"It was something that needed to happen, and better sooner rather than later," John says.

With almost 10 acres at their disposal, so far the Blairs are only using about one-third of the property, they say. In the future, they envision a barn with farm animals; a lavender shop and teahouse; an amphitheater with space for yoga classes or movie nights overlooking the lavender field; an herb garden; distilling demonstrations; water features; and more. They're tackling these dreams one phase at a time.

"You can come and enjoy the peace and quiet, or you can sign up for a workshop and get your hands into something," John says.

In January, the Blairs began clearing the overgrown property to make space for the field and paths. Even now, mesquite shoots unwilling to relinquish their place sprout among the tidy rows of lavender plants.

In May, a small team of volunteers helped the Blairs plant 3,000 lavender plants  — Grosso and Royal Velvet. Some are blooming now, but most won't bloom until next summer. Tables and benches now rest beneath trees with varied views of the lavender field. There's even a full-size Cinderella carriage decorated to whisk you into autumn. On Open Farm Days, you'll be able to meet an array of farm critters such as a donkey, pot-bellied pig and goats — the future landscapers of Life Under the Oaks.

The farm is already hosting workshops at picnic tables beneath the enormous oak tree Carolyn has named the Five Sisters — after the tree's five trunks.

On Open Farm Days, you can also peruse a pop-up shop of all things lavender. Carolyn also has a lavender shop down the road at Sue and Jerry's Trading Post at 1015 W. American Ave.

In the midst of all of this — closing one farm, opening another, planting lavender and hoping it survives — the Blairs have also navigated drought and, yes, the pandemic.

When they open this weekend, they'll do so masked and greeting their visitors from a safe distance. It turns out that more space in 2020 is a really good thing. The public can purchase tickets to explore the new lavender farm during Open Farm Days Fridays, Saturdays and Sundays from 10 a.m. to 2 p.m. Pre-registration is requested so they can monitor capacity.

"It almost didn't come to fruition," Carolyn says. "But I personally decided I'm going to make this happen ... Once I made that decision, there was no looking back. It's too important to me, and it brought too much joy to so many people."

Mary Ellen Conrado has volunteered restoring planes at the Pima Air and Space Museum for 20 years. She volunteers at the Tucson museum three days a week, restoring fabric used on older airplanes.

Check out all the local Halloween events still happening this season. Get your scare on with open-air events, drive-in Halloween movies, mural…

Things to do this weekend in Tucson, Arizona including virtual events, drive-ins, drive-thrus, open-air events, Halloween and fall things to do, Oct. 7-11.

The largest soaptree yucca in the United States used to stand stock-straight near Tucson, its stalk rising almost 30 feet in the air. Now the plant is seriously stooped, prompting admirers to worry.

Things to do this weekend in Tucson, Arizona including virtual events, drive-ins, drive-thrus, open-air events and Halloween and fall things to do, Oct. 14-18, 2020.

5 Tucson hikes to take with your family Thanksgiving 2020 weekend

These hikes will take you into the desert to see towering saguaro cacti, beautiful views of Tucson, Arizona and even a stone house long deserted. These are mostly easy to moderate hikes you can do with family.