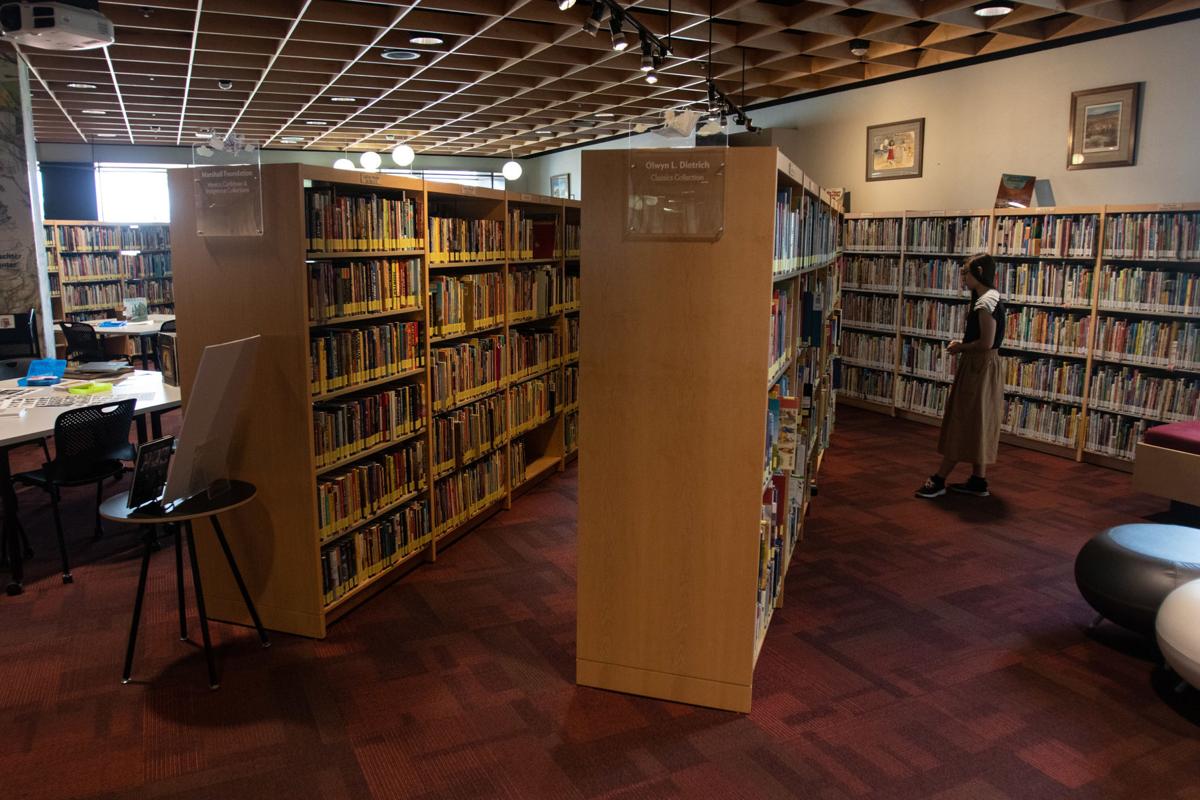 Student Worker, Aika Adamson maintains the Worlds of Words library during an open house exhibit. With 40,000 titles, Worlds of Words is the largest global collection of children's literature in the U.S. and is open to the public at the University of Arizona. 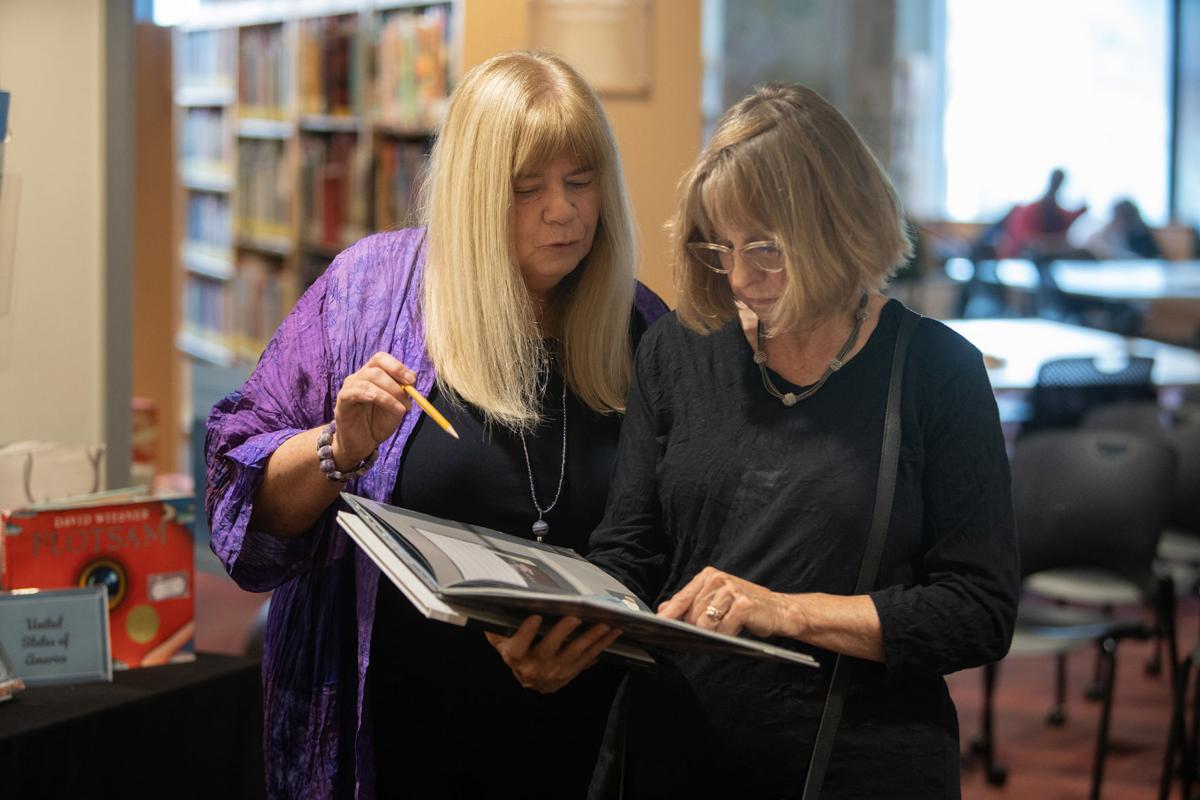 Kathy Short (left), director of Worlds of Words, discusses a book with exhibit visitor Gudrun Godare. Worlds of Words is a non-circulating collection of global children's and young adult literature in the Education building at the University of Arizona. This exhibit occurred on July 25th, 2019. 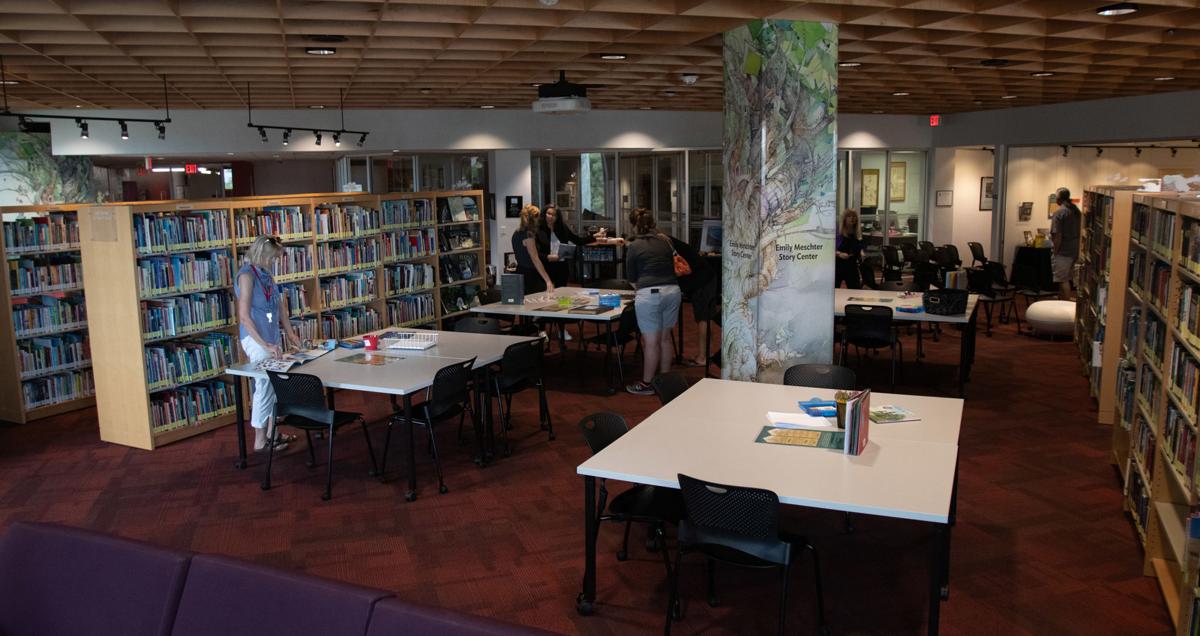 Visitors of the Worlds of Words library view literature part of the “Visual Narratives: Connecting Across Languages and Cultures” exhibit on July 25, 2019.

On the fourth floor of the University of Arizona's College of Education, 40,000 books tell the stories of children and teens from around the world.

Sunlight streams through windows showcasing views of the Catalina Mountains, and window benches beckon, welcoming students studying or children curling up with a picture book.

The Worlds of Words: Center of Global Literacies and Literatures is the largest global collection of children's and young adult books in the United States.

The collection is impressive — especially when you consider that the thousands of titles now lining the shelves in this UA library originated with a first-grade-teacher-turned-professor who began acquiring books years ago.

Here you'll find stories for preschoolers through twelfth graders that take place outside of the U.S. or feature marginalized American communities. The library has a strong Mexico collection, multiple shelves dedicated to books on indigenous peoples, plenty of award-winning titles and even a special world languages collection.

This is a non-circulating library used for research. So while you can't check anything out, there are still plenty of ways the public can use the space, whether that means browsing the shelves and spending a few hours reading or attending an author or illustrator workshop for kids.

Kathy G. Short, the founder and director of Worlds of Words, learned about the globetrotting power of words early in life. Growing up in a rural community in Ohio, books became her gateway to the world.

"There were 3,000 people in the town and that was too big," says Short, now a professor of teaching, learning and sociocultural studies in the UA's College of Education. "We didn't live in town. We lived in the country, and I was a reader because we were so isolated. The more books I found that were set in other parts of the world, the more intrigued I got. And it became a passion for me to one day see different parts of the world."

Short says both of her parents grew up in farm families and dropped out of school in eighth grade to help on the farm. For her, books came not from her home but from libraries and school.

"I had a really deep sense of what literature could do and that gave me a deep love of books," Short says.

She carried that passion into the six years she spent as a first grade teacher, cultivating a collection of books for her students.

"Because books had been so significant for me, I was one of those teachers who spent my own money so I could have a really good classroom library," she says. "I knew kids needed that."

When Short started at the UA in 1989 as a professor of children's and adolescent literature, she shipped boxes of books across the country from Indiana, where she was living at the time.

Short does a lot of work with schools around the world, and her position at the UA further immersed her in the world of children's literature. She has served on award committees and in professional organizations, published journals and penned one of the field's major textbooks.

Publishers sent her enough books to outgrow a closet and then a small room in the UA's education building. Her growing collection eventually ended up in the basement.

"My children were really young at that time, and someone took a picture of them where my son was sitting in a chair and my daughter was crawling on top of it to get to the books. ..." Ballenger says, laughing. "They used that for fundraising purposes."

Short says the collection wasn't really open to the public at that time — there just wasn't space.

"This began in 2007, and at that point, we were really a collection, rather than a non-circulating library." Short says. "We were in this little office pod where we divided the books into different reading rooms."

But in 2014, after the education college decided not to update its computer lab, that big fourth floor space became the Worlds of Words, Short says.

And oh, what an upgrade.

"Every time I come here, I feel really calm, almost like a home, I guess," says Carolina Hoyos, a student worker. "Everyone who comes here is always really interesting and interested in what Worlds of Words provides for them."

Spend some time here, and you'll join scholars from the university and around the world who do research at the center, along with teachers using the space for professional development. Throughout the school year, teen ambassadors read books, discuss them and then promote them at their own schools. There's a lot going on.

"I like stories about teenagers, and if it's someone in a totally different part of the planet or a different situation, you still have the connection of being the same age," she says.

The books you'll find in the collection are primarily in English and published and distributed in the United States, even though they focus on global stories.

That's why even though you can't check anything out here, Worlds of Words publishes journals and book lists to help you find global titles for the kiddos in your life. It's also why the the physical collection is primarily organized by region of the world.

"If a school says you have to teach Shakespeare or Beowulf, what other books can you connect to that?" Short says of some of the work she does with teachers. "You might not be able to replace that classic from the canon, but what's a young adult global book that you could pair with it?"

The center also lends out Language and Culture Kits for middle school and older elementary school students and Global Story Boxes for preschool and younger elementary school students. Teachers, libraries and literacy groups can use the free, country-themed kits to supplement their own curriculum. Each box spotlights a different country or region and comes with age-appropriate books, teaching materials and maybe even some play things for the younger groups.

"Literature provides a way to go beyond being a tourist or getting facts on the internet..." Short says. "With literature, you're able to live in that story world and live in that time and place and connect emotionally with a character, so it builds a very different understanding of values and culture, and it builds empathy in a way that facts do not. This center grew out of my seeing that need and beginning to build this."

The center is currently showcasing an exhibit of global pictures books that tell stories mostly through images. Several activities invite visitors to engage with the books. The exhibit "Visual Narratives: Connecting Across Languages and Cultures" will be at the library into December.

For more information, go to wowlit.org.

Get your wands ready for 3 magical, Harry Potter events this Saturday

You'll need a Time-Turner to catch all the wizarding fun happening this weekend.

Tucson has a treasure trove of opportunities for extracurricular education, whether you want to expose your kids to other cultures or teach them about the world.

With perfect weather and festive cheer around the corner *crosses fingers*, here are some big Tucson events we're looking forward to as we wrap up 2019.

When Susy Chávez Herrera had her daughter, she wanted to find a Spanish storytime for littles.

The University of Arizona campus isn't just college lectures and weekend tailgates, you don't even have to be a college kid to enjoy all the UA has to offer.

This new library program will help you and your child prepare for kindergarten ... for free!

The library wants to help you and your kiddo get ready for kindergarten.

Tucson Festival of Books and Worlds of Words: Center of Global Literacies and Literatures are bringing children's book authors and illustrators to Tucson families and teachers through livestreamed conversations every week.

Tucson's newest bookstore, Littlest Bookshop, has hundreds of books for children of all ages. The shop's grand opening is set for New Year's Day.