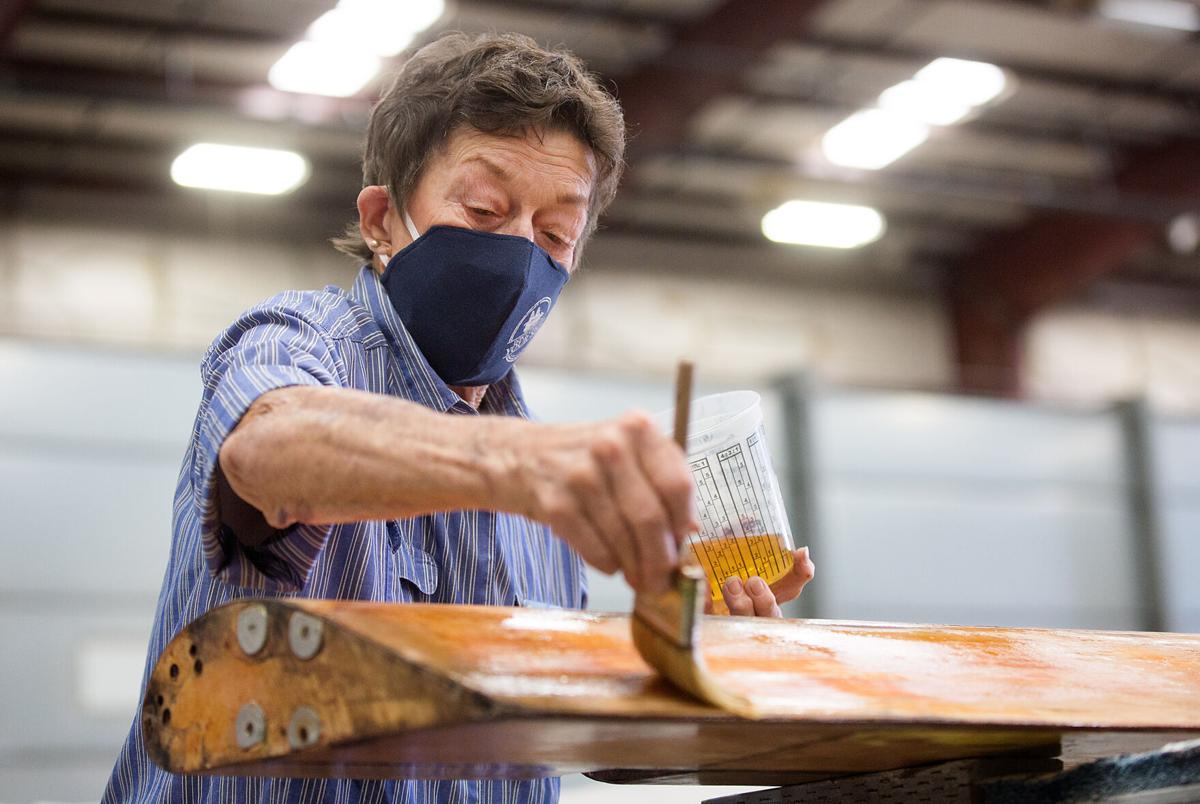 Mary Ellen Conrado, 89, applies a varnish to a flap while volunteering at the Pima Air and Space Museum on September 14, 2020. Conrado has been volunteering at the museum since 2000. She repairs fabric that often covers older planes and it's a very specialized job that she has learned over the years. 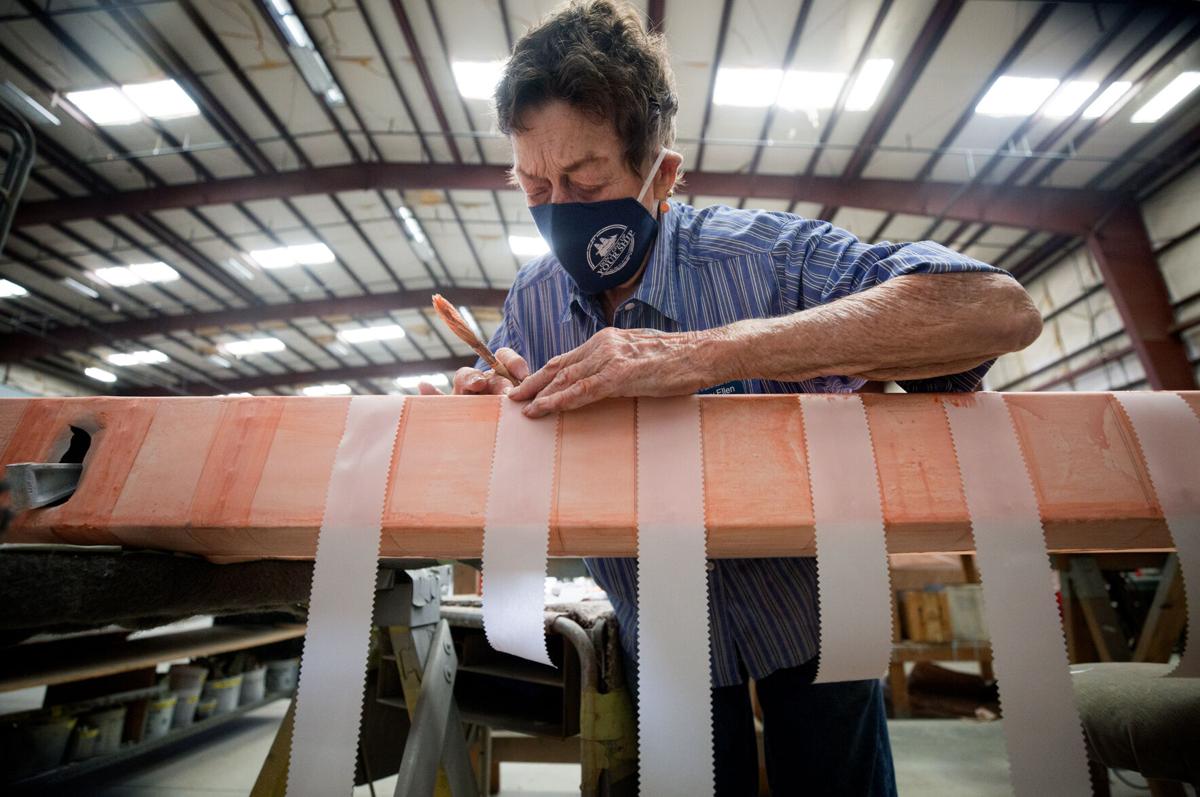 Mary Ellen Conrado glues on a piece of fabric while volunteering at the Pima Air and Space Museum on September 14, 2020. 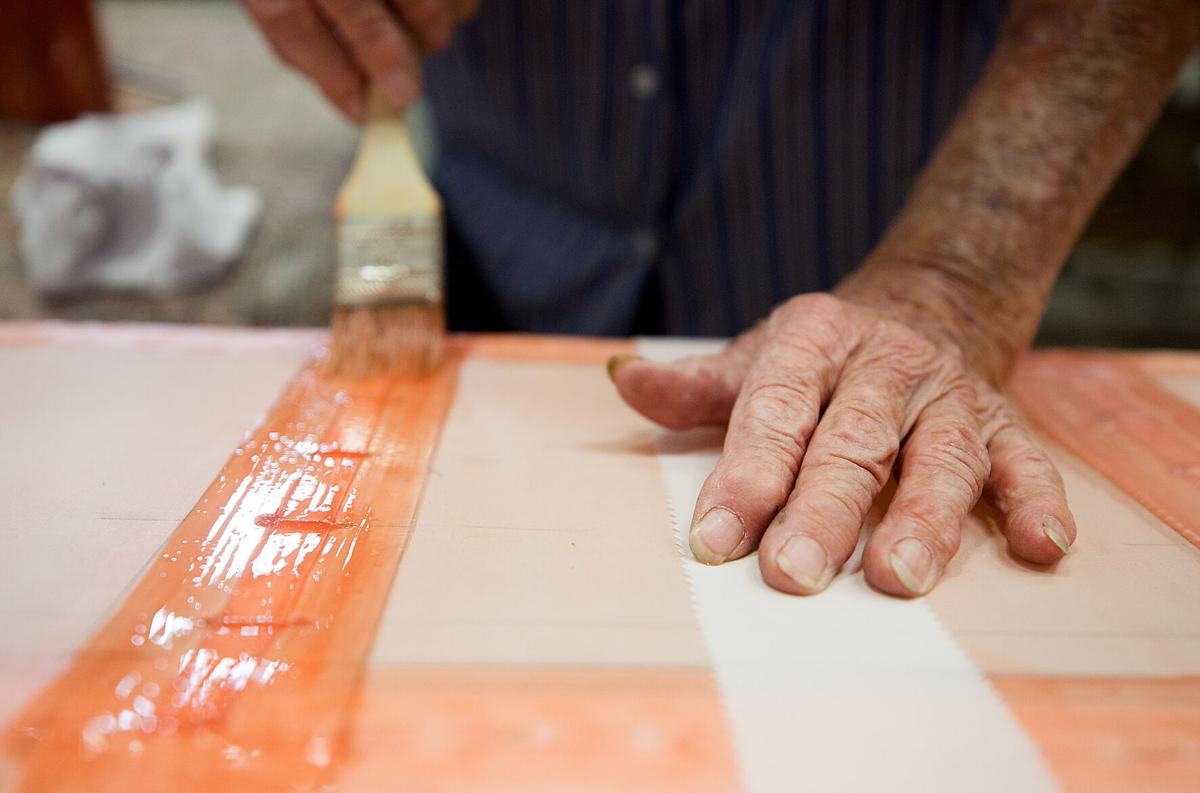 Mary Ellen Conrado glues on a piece of fabric while volunteering at the Pima Air and Space Museum. She has volunteered at the museum for 20 years. 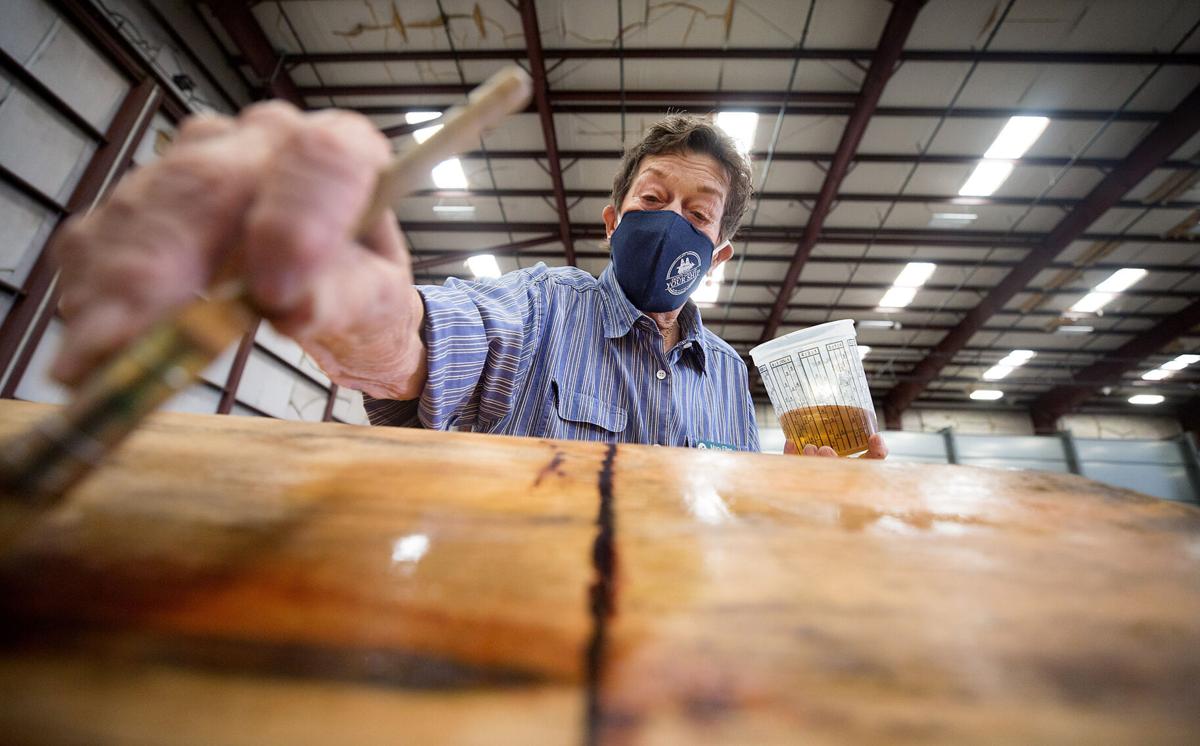 Mary Ellen Conrado applies a varnish to a flap while volunteering at the Pima Air and Space Museum. 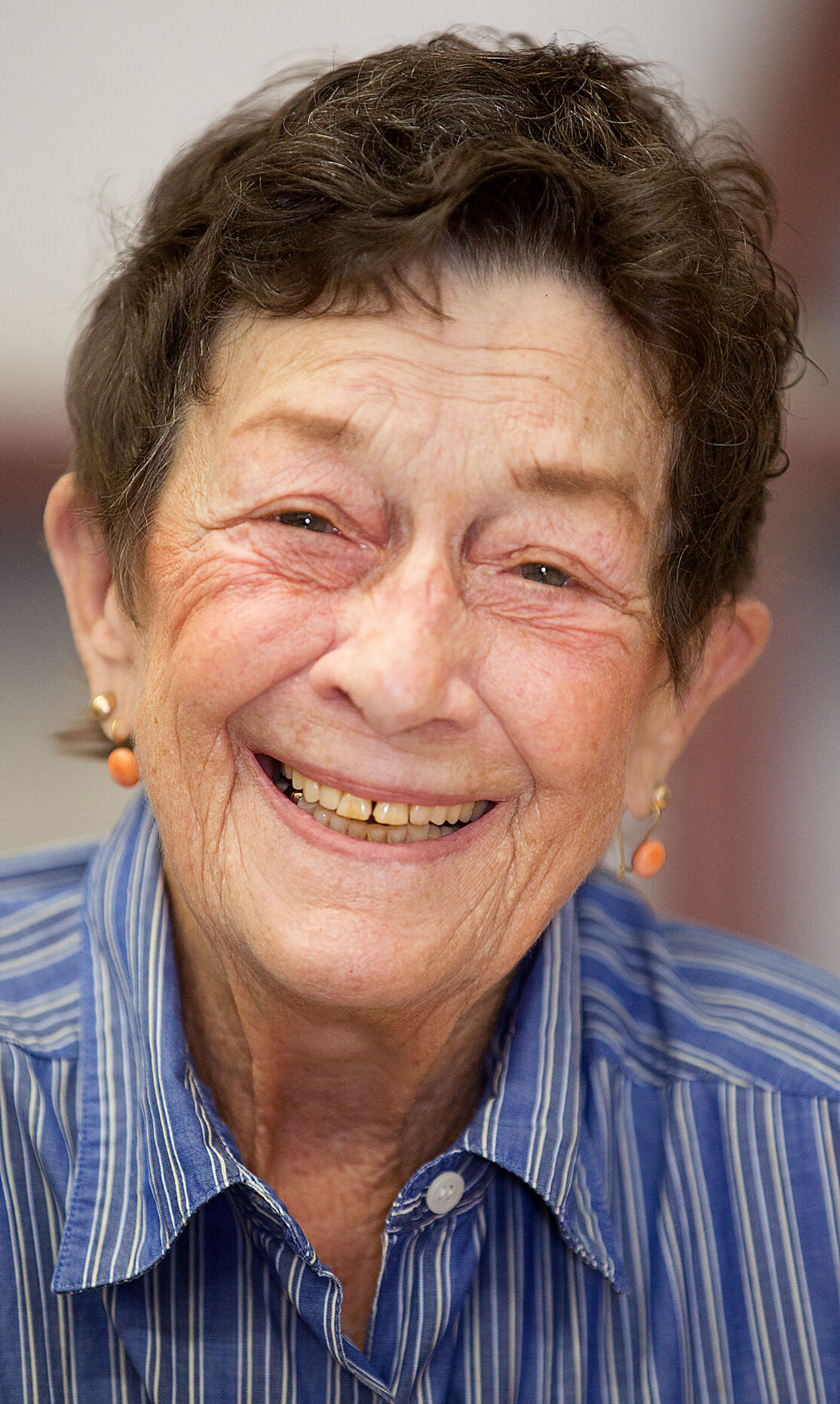 Mary Ellen Conrado is an 89-year-old volunteer at the Pima Air and Space Museum.

Mary Ellen Conrado goes where the wind takes her.

And 20 years ago, it brought her to the Pima Air and Space Museum.

Conrado, 89, has spent the last 20 years volunteering at the museum, and for most of that time, her job has involved the specialized restoration of the fabric coverings used on many older aircraft.

Before that, Conrado traveled the country in an RV, doing volunteer construction work with Habitat for Humanity. And before that, she saw the world by sea, volunteering (and sometimes getting paid) to go sailing.

"I just didn't want to be ordinary, which I am. But I tried not to be," Conrado says.

Certainly, her role at the Pima Air and Space Museum is not ordinary. With 20 years and about 14,500 volunteer hours, Conrado is the museum's expert on the fabric work that needs to be done to restore parts of older airplanes, says Amy Raftis, the manager of public programming and education for the Arizona Aerospace Foundation, which operates both the Pima Air and Space Museum and the Titan Missile Museum.

"She is completely essential," Raftis says. "The work that she produces is flawless."

Conrado says older airplanes had fabric covering some parts such as control surfaces (think elevator, rudder and ailerons). Time — and that Arizona sun — deteriorates the fabric. Conrado's job is to replace and restore it.

"A large part of what we do is restore aircraft," Raftis says. "It's not just keeping up our current collection, but also bringing in new aircraft to display, so we need those skillsets to work on planes, especially planes of the past. It's crucial to make sure we have the best restoration done to preserve the history that these planes are."

In March, the museum closed when everything else did. And for a short period of time, no one could volunteer, including Conrado.

"It was all right," she says. "I sat around and read and did crossword puzzles. But it's so much better when you can work."

Luckily for her, the volunteers doing restoration work don't interact with the public so some were able to return within limited hours, Raftis says. Plus, there's lots of room to social distance in airplane hangars. Naturally, Conrado is back to work.

"I have about 14,500 hours, so I'm starting to tell people when I reach 15,000 hours or turn 90, whichever comes first, I'm going to quit," says Conrado, who currently volunteers at the museum three days a week.

Before she goes, she'll have to make sure others are trained to do what she does — the museum has planes that date back to World War II, Raftis says. But it's more than just the skills, specialized though they are.

"She just genuinely cares," Raftis says. "When you talk to her about her work, the passion, you can just feel it, and it comes through in the quality of her work and her work ethic."

For Conrado, too, giving up her restoration work — she jokingly calls herself a "fabricator" — isn't something she's in a hurry to do.

"I just need to get out and move," she says. "At this point in time, if you don't move your body, it goes down. ... After 20 years, I still enjoy doing it, which surprises me, because usually I only last six or seven years at something."

Conrado says she started volunteering at the museum after someone she met through Habitat for Humanity mentioned it. She had always been interested in airplanes and even had a pilot's license (she never flew because she quit her job and couldn't take flying lessons), but didn't actually know that much about them.

She started volunteering, sweeping and doing other odds and ends. And then, after a few years, she helped someone work on an airplane.

"That's where I got started with the fabric work," she says.

Her expertise took her twice to Australia to work on planes there, including the de Havilland Vampire, a British fighter jet developed around the time of World War II.

"I didn't charge," says Conrado, adding that her travel was sponsored. "If I had wanted to charge to do this work, I could have been rich by now."

Mostly, Conrado has just done what she loves. After two decades of working at Shell Oil in a variety of roles — elevator operator, file clerk, librarian, data processor — Conrado says she quit rather than work another 20 years before retiring. For several years she did odd jobs. And then she saw the 1877 Elissa, a historic ship restored by the Galveston Historical Foundation, according to the foundation's website.

Originally from California, Conrado was living in Houston when she first saw the Elissa. She was enamored. So she volunteered to work aboard the ship. At the age of 51, she started sailing. Eventually, she even got paid.

"It was hot and cold and wet and terrible with 12-hour days and usually six days a week," she says. "And people say, 'Why did you do it?' But you sure get hooked on it, that's for sure. You get hooked on the highs."

She says that she sailed for about 10 years, working on multiple boats and even sailing between Turkey and Australia at one point. She says she put in about 50,000 sea miles.

"I know a lot of people said they sure wished they could do this, could go sailing, and I said, 'You can. ... But you just can't say, 'I'll wait to finish this' or you'll keep putting it off,'" Conrado says. "If you want to do it, you have to do it while you have a chance. There is always something to be done that can put you off doing it."

Conrado says that she has always leaned toward the unconventional.

"I don't know how I've managed," she says of her many volunteer jobs. "It's a good example of what you can do with not much money. I don't need a lot. You find out you don't need a lot of things."

Instead, she has gained experiences and expertise, climbing up a storied ship's rigging and carefully restoring historic airplanes. What she has learned, she has shared — mostly for free.

"I really enjoy what I'm doing," Conrado says of her work at the museum. "And it's very difficult to find anything that takes its place. I come from a family of people who volunteer. It's just a way of life."

Beets turns 100 on Nov. 18. To celebrate, her family published her book of children's stories, "I'll Find You, Tumbleweed," as a birthday gift.

It's getting hot. Let's go for a (vicarious) swim.

This badass Tucson hiking expert walked 80 miles on The Loop. But that's nothing.

You will want to get outdoors after reading this.

Arizona 2020 election: What you need to know about voting in Pima County

The last day to register to vote in Arizona is Monday, Oct. 5. How to register in Arizona, how to update your registration, how to vote by mail in Arizona and other voting resources.