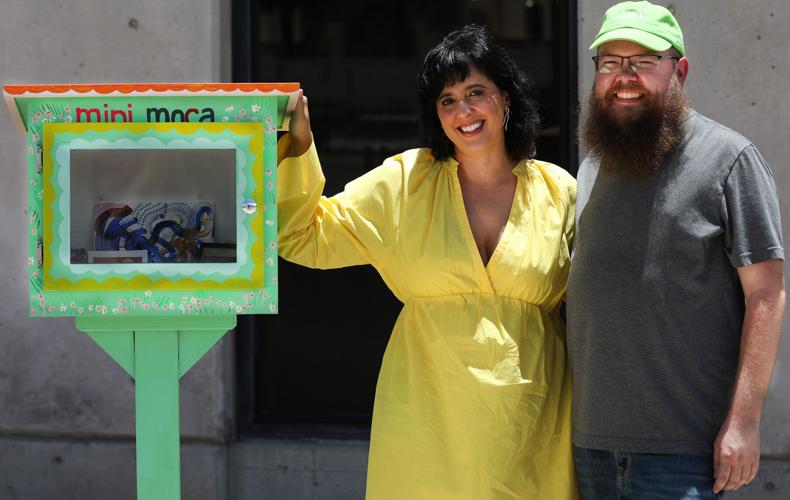 Lex Gjurasic and Harrison Orr stand with Mini MOCA, a tiny free art gallery outside of the Museum of Contemporary Art. 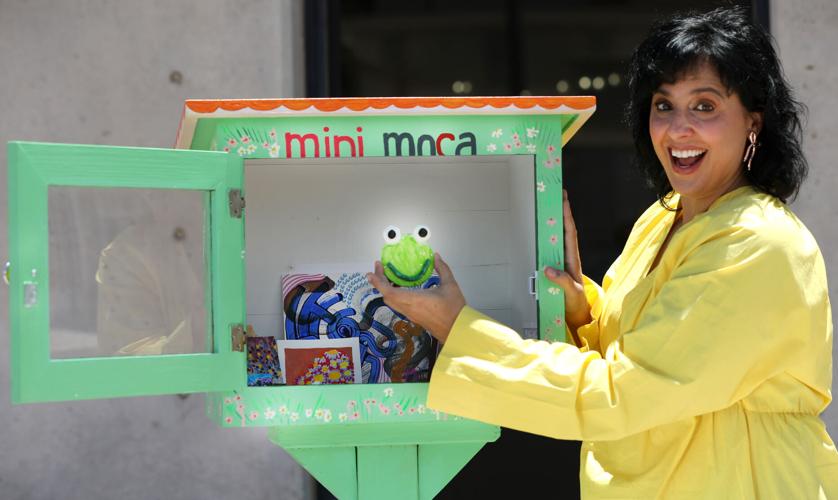 Lex Gjurasic, one of the masterminds behind Mini MOCA, poses with the tiny free art gallery outside of the Museum of Contemporary Art. 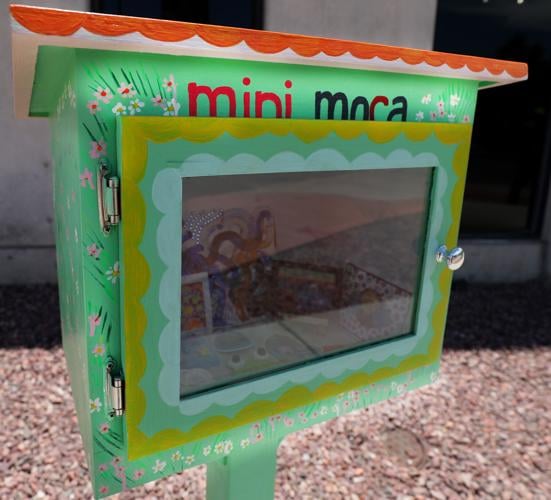 The mini art gallery called Mini MOCA allows people to leave and take creations for free. It is located at the Museum of Contemporary Art, 265 S. Church Ave. 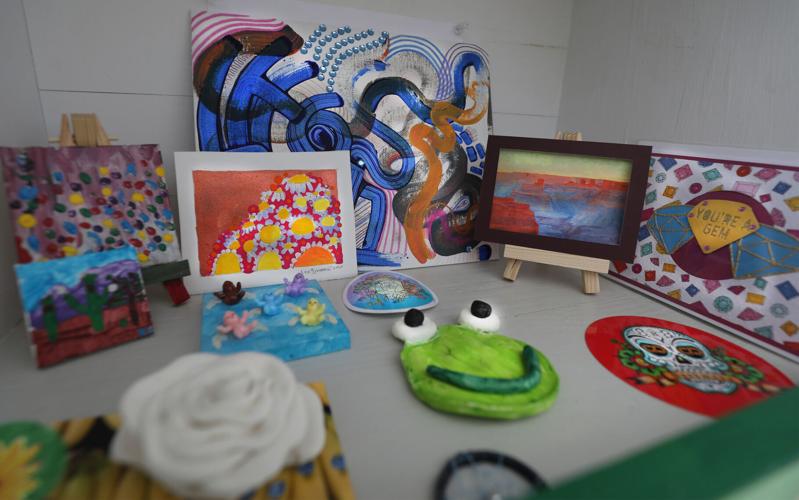 Mini MOCA allows people to leave and take creations for free. It is located at the Museum of Contemporary Art, 265 S. Church Ave.

Editor's note: Have you visited Mini MOCA yet? We're resharing this story from June 25, 2022, because the second Mini MOCA is now here! Find it at United Way, 330 N. Commerce Park Loop 🎨🎨

Standing outside the Museum of Contemporary Art is a bright green box with flowers painted on top.

From afar, you might think it’s a little free library. It’s not.

It’s Mini MOCA, a tiny free art gallery no more than two feet tall or wide, that was completed a couple weeks ago. Look inside the glass and you’ll see mini art, like a postcard-sized photo of bananas or a rock sitting on a tiny easel.

Its concept is similar to little free libraries, but instead of books, it’s art. The mini gallery, at 265 S. Church Ave., allows passersby to leave their own mini creations for others to enjoy. People can take creations for free, too.

“You literally bring art, leave art, there’s no scam, there’s no charge,” says artist Lex Gjurasic, one of the masterminds behind Mini MOCA, adding that you don't have to leave something to take something.

“Anyone can bring work there. It’s not like you have to have art of a certain caliber,” she says. “It doesn’t necessarily have to be tiny sculptures or tiny paintings. It can be zines, it can be stickers, it can be a love letter. I think (this is) a perfect match for Tucson.”

Gjurasic had heard of mini free art galleries in other communities and had previously dabbled with the idea of creating one for her front yard. But the idea finally came to fruition recently, as Gjurasic was facilitating MOCA’s intergenerational LGBTQ+ art program Stay Gold, focusing for 10 weeks on teaching students how to make dioramas inspired by their own journeys.

“We put the focus on miniatures and dioramas and I started thinking (a mini art gallery) would be a great project for our students to be involved in,” Gjurasic says.

She mentioned the idea to MOCA’s education manager Harrison Orr and he was in.

“Lex and I were on the same wavelength with it,” he says. “We both were like, ‘let’s do this, this sounds awesome.’”

“I think it gives people, who maybe wouldn’t necessarily come into the museum, museums aren’t their first choice, people are just walking by — (they) can stop by and look at it,” Orr says, adding that it's a good, interactive way to connect with the community.

He recounted a story of a woman who said she was visiting her kids in Tucson recently when she happened to walk by Mini MOCA. She took one of Gjurasic's tiny paintings, then went home and made her own piece of art. She headed back to the museum to put her piece inside, saying Mini MOCA made her day.

“I think it kinda brightens people's day to see this cute little art and be able to take it home,” Orr says.

Mini MOCA is open and accessible to everyone of all ages, though it also gives MOCA the opportunity to connect with Tucson's young creatives.

“Long story short, Harrison believed in the Mini MOCA and I think it’s a great extension of MOCA’s educational program, meaning kids can always make mini things to put in it,” Gjurasic says, adding that there are hopes to place a QR code on Mini MOCA to lead people to the museum's many educational programs.

MOCA is also hosting camps for kids and teens this summer — which are still accepting applicants — and Gjurasic hopes to incorporate Mini MOCA in those programs, too.

“I’m excited to have students add stuff and really invigorate the Mini MOCA,” she says.

Mini MOCA was made possible thanks to support of the Stay Gold program from the University of Arizona's Institute for LGBT Studies. UA graduate students in the Art & Visual Culture Education program also teamed up with Stay Gold students to help conceptualize Mini MOCA and create miniature artwork.

Orr hopes to secure grants to create more Mini MOCAs for more locations across Tucson in the future, intertwining the additional locations with programs like MOCA's Minor Mutiny Teen Council.

“It's kinda this neat way of sharing art that’s accessible to all hopefully,” Orr says.

Beyond Mini MOCA, Gjurasic describes herself as a self-taught visual artist and community-oriented activist. She got serious about art at age 15.

“For me, art allows me to process the experience of being alive, both the traumas and the dreams and fantasies and possibilities,” she says. “Making art and being in my studio really is my serenity that allows me to just cope and process.”

This Tucson-based lawyer also works as an artist, creating art inspired by the Sonoran Desert and her own journey of self discovery.

There are more than 30 free plant stands in the Tucson area. Here's where to find them

Last year, Tucson welcomed its first free plant stand. Since then, more than 30 have blossomed in Southern Arizona. Find out where you can pick up and trade free plants, seeds, pots and gardening tools in the Tucson area!

Creating art and trying one new local thing a week: How this couple shares their love for Tucson

A local couple is using their social media accounts to connect the community to the very best of Tucson. Their accounts, The Tucson Type and the Fifty Two New Project, have garnered an increased following in the last few years.

4 Tucson restaurants where you can see local art

Check out these Tucson, Arizona restaurants and bars where the art on their walls are just as satisfying as the food on their menus.

Staycation spot: Hotel McCoy in Tucson, Arizona, has a footprint of more than 150 local artists from murals inside and out, to a cactus-themed claw machine and local art hanging above the beds.

Find Indigenous pieces at this new store on Tucson's south side

Clothing, jewelry, art pieces and more by Native American artisans can be found at the nonprofit Native Music Coalition's trading post on the south side.