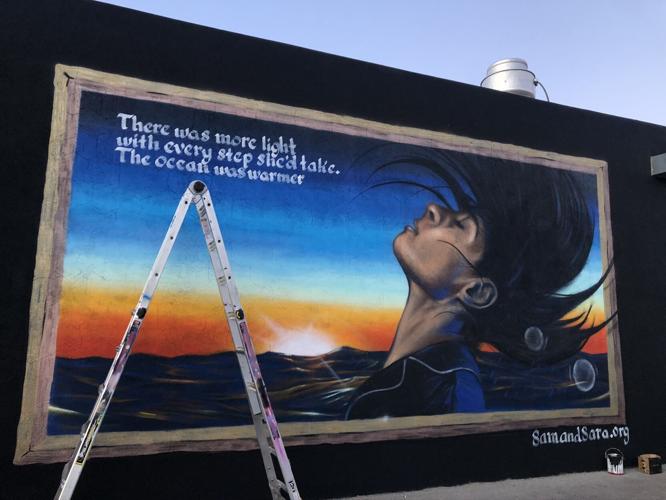 Isaac Caruso says "Sam & Sara" allows him to use all of his creative outlets. The pictured mural is in Cottonwood.

Top: “Sam & Sara” is a book by Isaac Caruso, illustrated entirely with murals across Arizona. The pictured mural is in Globe. 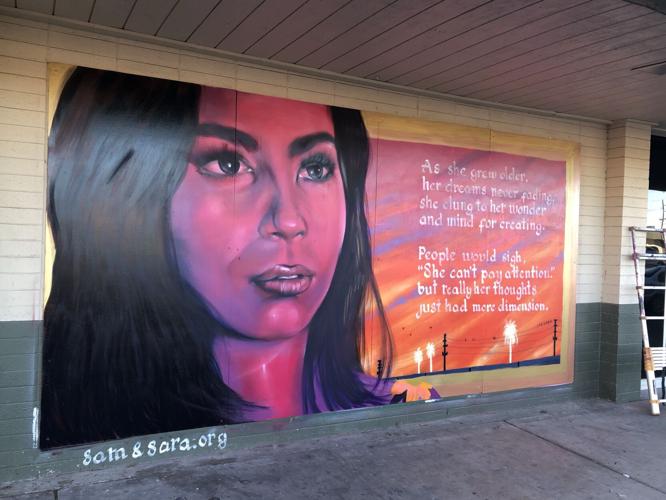 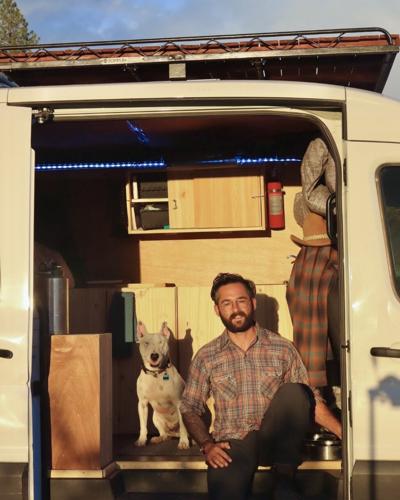 Isaac Caruso is traveling Arizona with his dog, painting murals for his book “Sam & Sara.” 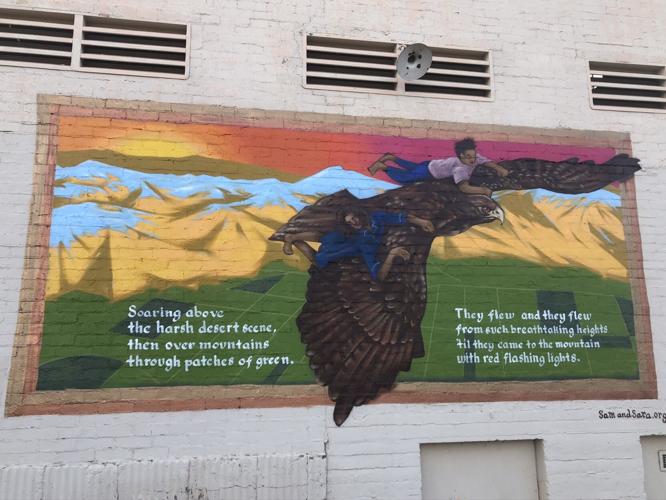 Isaac Caruso is actively looking for more cities to add to the list of "Sam and Sara" murals. The pictured mural is in Ajo. 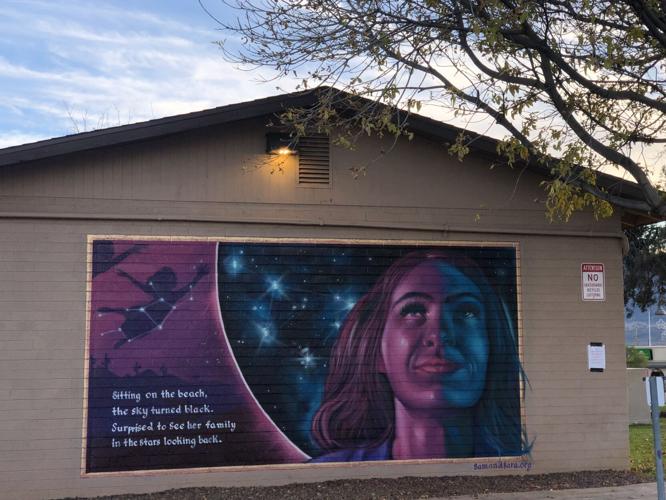 Isaac Caruso has so far created murals in Sahuarita, Sierra Vista, Flagstaff, Tempe, among others. This mural is in Camp Verde.

Isaac Caruso says "Sam & Sara" allows him to use all of his creative outlets. The pictured mural is in Cottonwood.

Isaac Caruso is actively looking for more cities to add to the list of "Sam and Sara" murals. The pictured mural is in Ajo.

Isaac Caruso is writing a book.

The illustrations? Murals across Arizona.

“It’s a 50-page children’s book illustrated with murals across Arizona and they all tell one cohesive story,” the Phoenix-based muralist says.

Caruso finished writing the story, dubbed “Sam & Sara,” in 2019 while in Tucson completing a mural at the Palo Verde pool. With the story complete, he set off to create coinciding murals across the state.

In the end, he’ll photograph the murals, which for now includes at least four in Southern Arizona, and compile them into a physical book. He hopes to finish the project by the end of the year.

The origins of "Sam & Sara"

The idea first popped into Caruso’s head when he was a sophomore in design school and his teacher asked students to illustrate a story graphically.

“All the art I had done at that point could be looped into a narrative and I thought, ‘How cool would it be to do that with murals?’” says Caruso, who became interested in graffiti around age 13 and knew by 19 that he wanted to be an artist. “Ten years later, here I am.”

He looks at the book as a community service, but it’s also an ode to Arizona.

“I think, as a whole, this state has a lot of personality and I wanted to explore it,” he says.

The book tells the whimsical story of a girl, who potentially has attention deficit disorder and is described as a daydreamer. One day, she blinks into her imagination, where she decides to stay.

“It’s meant to kind of underscore how useful and valuable and beautiful that type of thinking is,” Caruso says.

The book is dubbed a children’s book because of the way the story is told, but Caruso hopes it’s something that everyone can enjoy.

While traveling through the state, Caruso has been creating the murals, editing videos and exploring typography, calligraphy and graphic design.

“I’m kinda able to use all of my creative outlets with this project,” he says.

Of course, he also wrote the story himself — the first thing he’s ever really written.

“I definitely consider myself an artist more than a writer, but I guess I can call myself a writer now.”

An exploration of Arizona

Instead of painting the murals in only one city, Caruso decided to hop in a van — his dog in tow — and illustrate “Sam & Sara” all over the state.

“I really wanted to see more of the state, and, for example, I know Phoenix — born and raised there. I was living in Tucson and I like Tucson,” he says. “But I didn’t feel putting (the whole project) in Tucson would tell enough of the story.”

“I want people to have an excuse to see the state,” he says, adding that it could be a fun summer project for someone to hit the road and explore the book in real life.

Caruso has so far completed 29 of the 50 “Sam & Sara” murals in Flagstaff, Tempe, Ajo, Sierra Vista, Sahuarita, Tubac, among others. Patagonia and Rio Rico are on the way.

Caruso is actively looking for more space and more cities to add to the list of “Sam & Sara” illustrations. If you have a public-facing wall that you’d like to be beautified with a mural for the book, reach out to Caruso. The piece would be created for free, in exchange for the space.

For now, the locations of the existing murals are kept secret as a way to encourage travelers to “have an adventure of their own” while exploring Arizona towns on their mural hunt, Caruso says.

“They might talk to locals or stop to eat at a restaurant, and hopefully will be more engaged with the towns,” Caruso says of the murals that are all highly visible and public-facing.

But he's already spilled the beans on the Sierra Vista mural, so here's that location to get you started: It's located in the children's section of the Sierra Vista Public Library, 2600 E. Tacoma St., and the mural is the first page of the book.

Check out the “Sam & Sara” website here, and get in touch with Caruso here.

This artist was inspired by Linda Ronstadt. Now his mural will hang at the newly renamed music hall

After Tucson native Linda Ronstadt stopped singing due to Parkinson's, “I was moved by how she found an appreciation for other things in life, even though everything she was known for was taken away,” said Tucson muralist Rock Martinez.

Mariachi Cobre co-founder Steve Carrillo's likeness was used as a reference in the creation of mariachi-themed postage stamps. Carrillo was born in Tucson, Arizona.

Staycation spot: Hotel McCoy in Tucson, Arizona, has a footprint of more than 150 local artists from murals inside and out, to a cactus-themed claw machine and local art hanging above the beds.

For 15 years, this shop has brought Mexican art to Tucson 🎨🎨

This husband-and-wife team visits artisans in different states south of the border, picking up art to sell at their Tucson, Arizona shop and at fairs around the country.