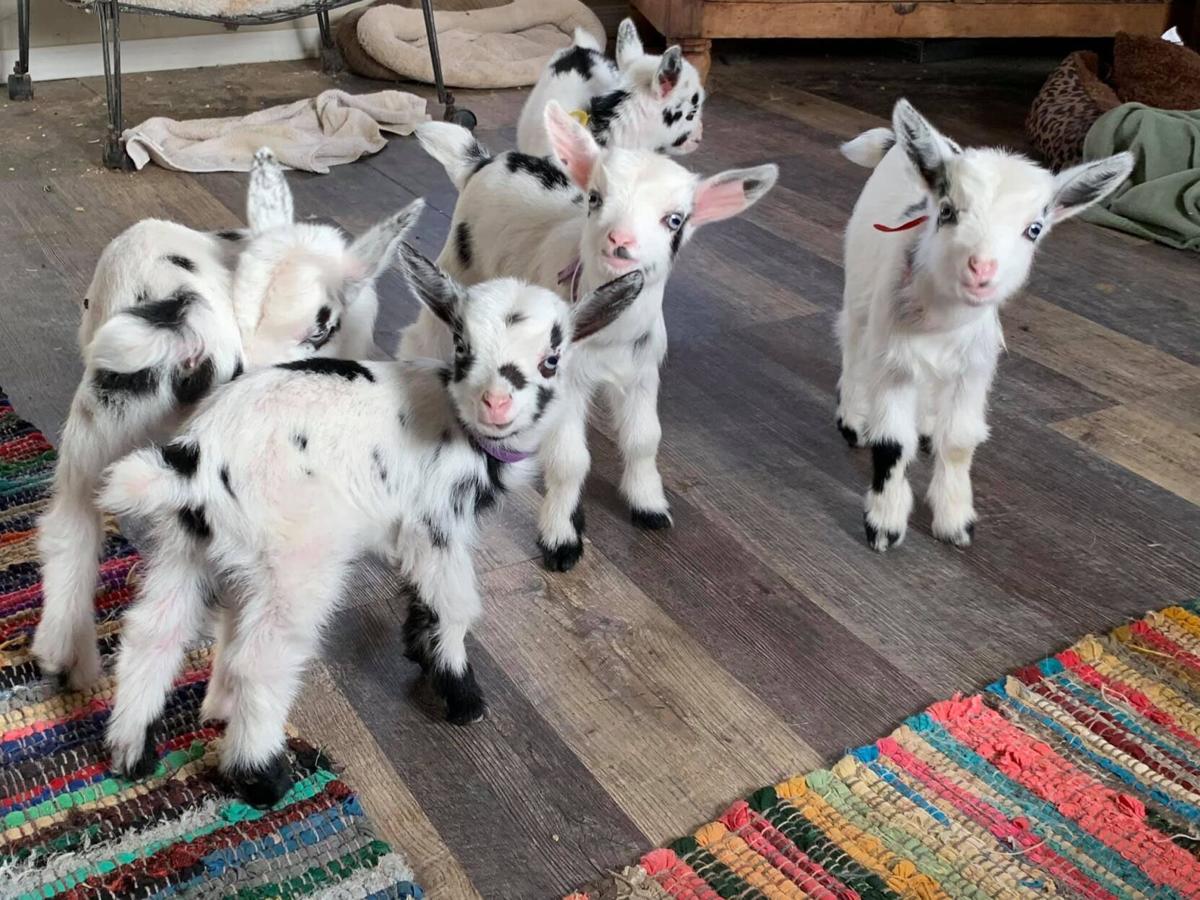 The five babies are known as Daisy's Wildflowers — Heather, Iris, Zinnia, Azalea and Sunflower — named after their mom. 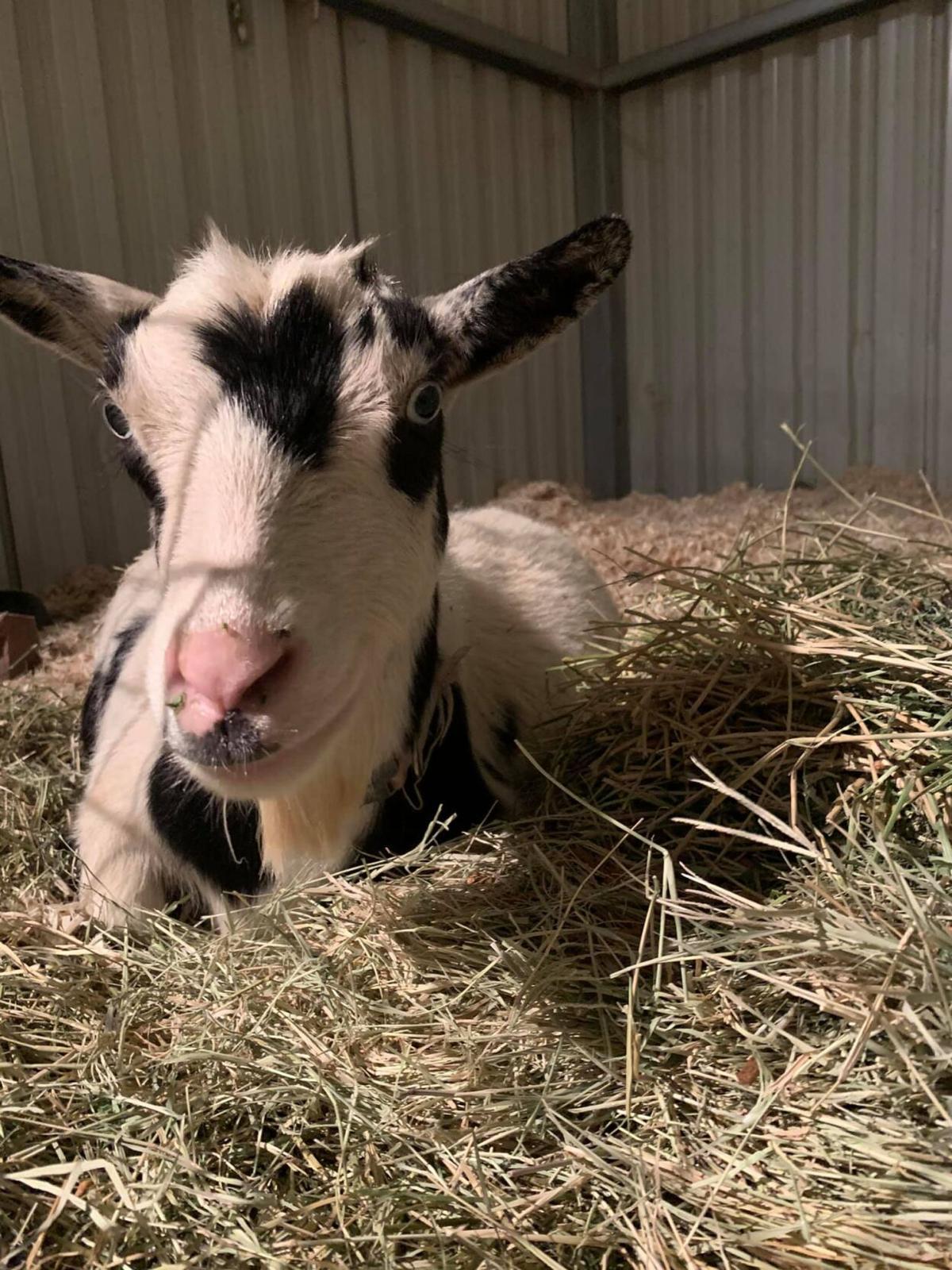 "She was very sweet and she fought long and hard and would’ve been an awesome mama," says Shelby Brawley of Daisy. 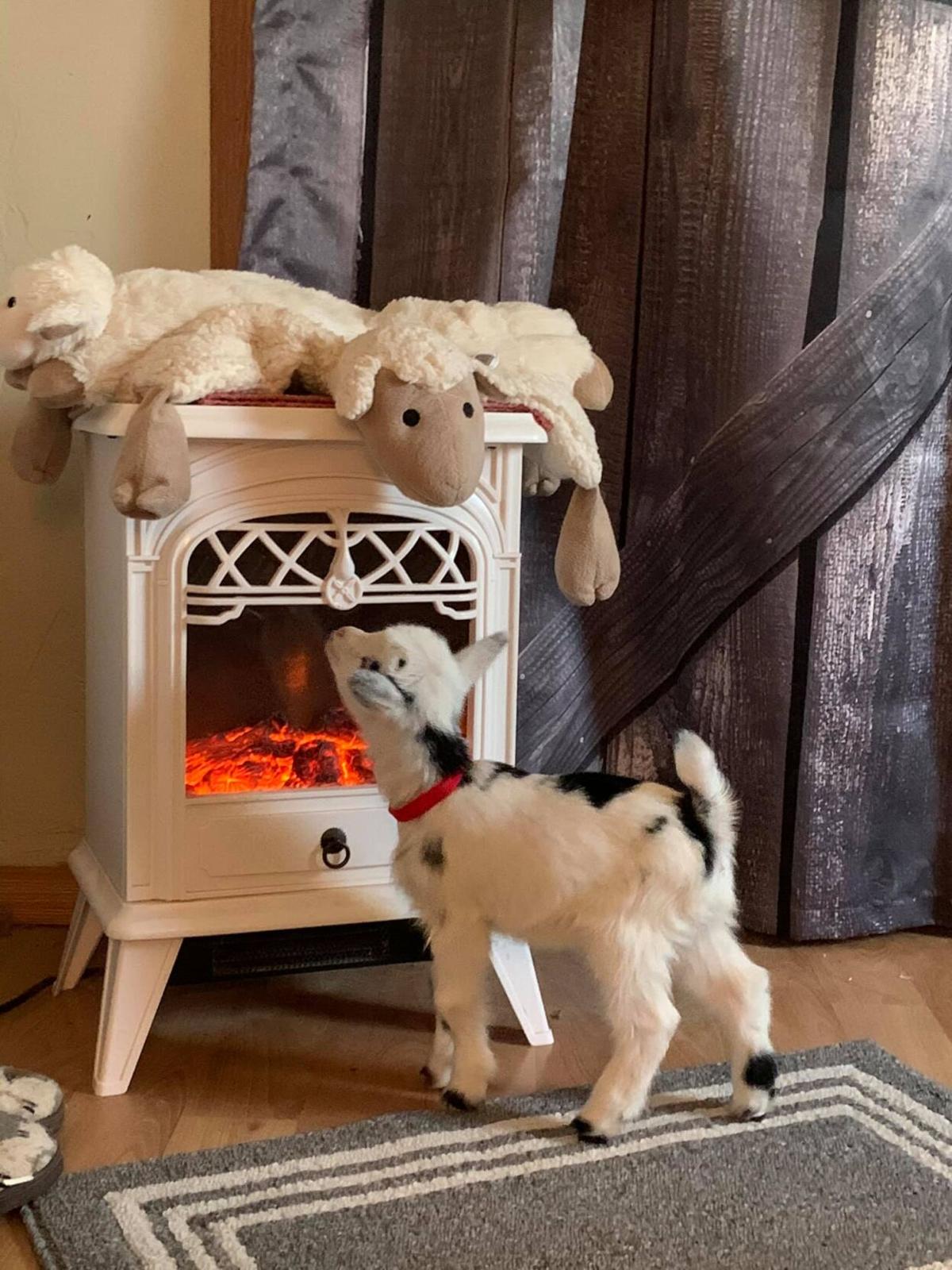 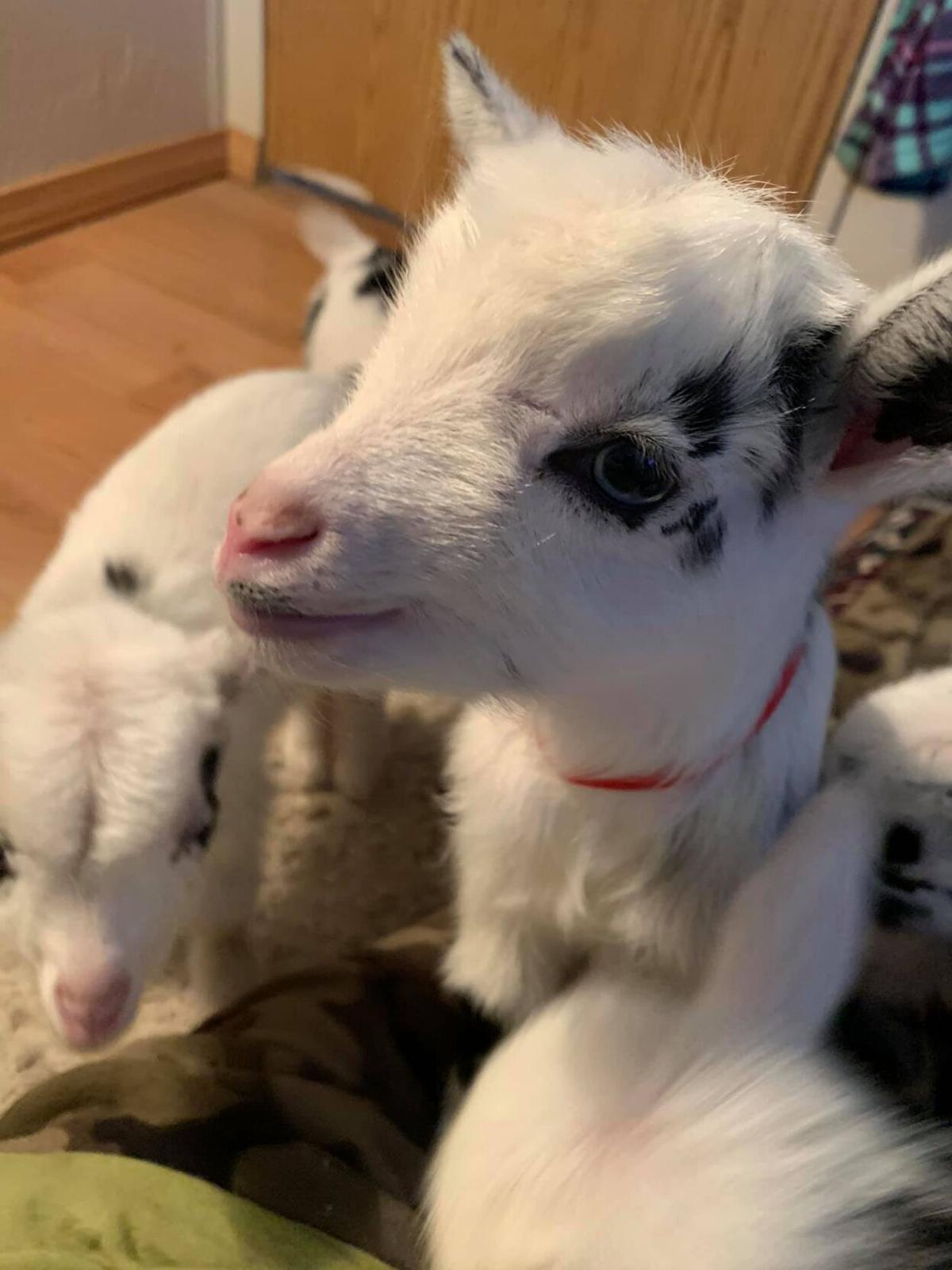 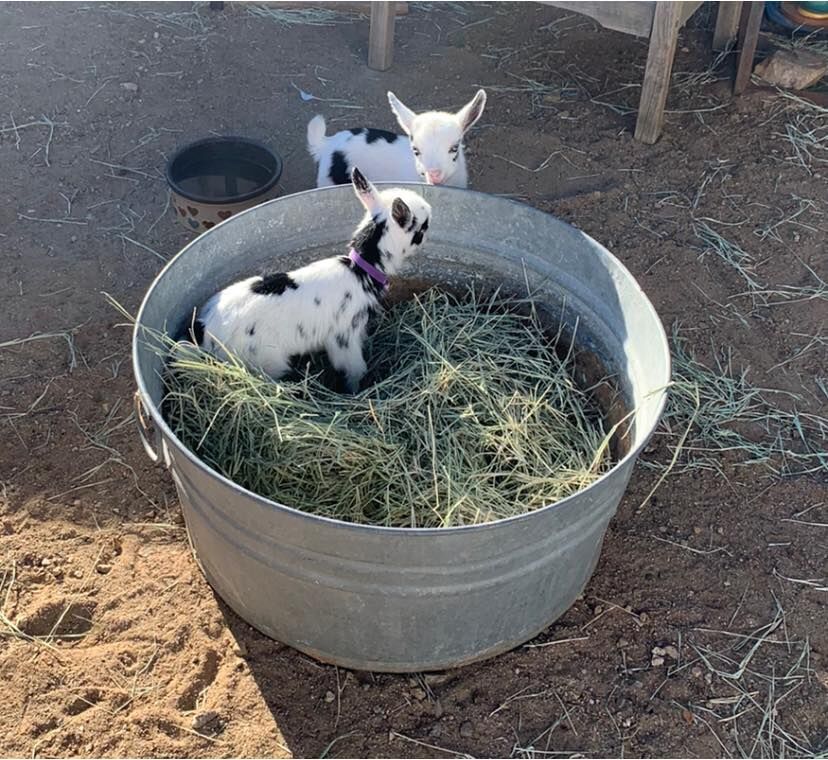 The five babies are known as Daisy's Wildflowers — Heather, Iris, Zinnia, Azalea and Sunflower — named after their mom.

When HoofsnHorns Farm Sanctuary took in a sick goat named Daisy, they knew she was pregnant.

But they never thought she’d give birth to five babies just days later.

HoofsnHorns co-owner Shelby Brawley was told the chances of a goat having five babies are very slim.

“We were all just freaking out — we were laughing so hard,” she says. “We were just grateful and just feeling very blessed.”

HoofsnHorns rescued Daisy — who had a prolapsed uterus and cervix — on Friday, Jan. 22, when learning that Daisy’s family couldn’t afford to get her the care that she needed.

“She was in search of help,” Brawley says of Daisy’s owner. “I don’t know who told who about us, but I always joke that our names are on the bathroom wall of some feed store.”

Brawley, who started HoofsnHorns with her mom Sidney Smith many years ago, took Daisy to Adobe Veterinary Center to get her checked out, then took her home.

No one knew of Daisy’s due date, but she was scheduled for a C-section the following Tuesday.

“Of course it’s a rainy, cold weekend and she’s miserable,” Brawley says. “I just lay out there with her and tell her everything’s going to be fine.”

By Sunday night, Brawley felt like Daisy was starting to have contractions. And just her luck — Daisy's veterinarian, Dr. Christine Staten, was scheduled to be at an outdoor sanctuary all day Monday, but the outing was canceled due to the weather.

“She called and said, ‘Guess what? My schedule for tomorrow is crazy free,’” Brawley recalls. “And I said, ‘Praise the Lord, because I really feel like she’s in labor.’”

“The doctor came flying out when she heard Daisy was in labor,” Brawley says. “It was better than any Chicago Med or anything you’ve ever seen on TV.”

The center took care of Daisy and sent Brawley home to feed the rest of the HoofsnHorns animals.

Then Brawley got the call — one healthy baby girl had been delivered.

Brawley decided to head back to the vet to meet the three babies, who needed to be bottle-fed due to Daisy having mastitis. Since Daisy hadn’t yet passed her after-birth, Staten decided to check her one more time before sending Brawley home.

“She comes flying out the door and says, ‘Guess what? One more!’” Brawley says.

And yet one more check later — Staten confirmed the birth of the last baby girl, totaling five babies weighing under 3.2 pounds each.

Despite the joy of welcoming five baby goats into the world, Daisy died the following day.

“She passed in my arms before noon,” Brawley says. “It’s been very sad. She was very sweet and she fought long and hard and would’ve been an awesome mama. There was no reason she should have passed — we did not expect this at all.”

With no mama and the cold weather outside, Brawley has been keeping the babies inside her home. It’s also easier for Brawley to keep them close since she has to feed them around the clock.

“I said we really should name them after their mama somehow,” Brawley says. “We just spent the first night looking at them and looking at flowers and they just kinda fell into place.”

Brawley intends to keep all five of the babies and eventually build them their own space at the sanctuary. HoofsnHorns also has pigs, sheep, horses, cows, donkeys, chickens and ducks.

Things to do this Feb. 11-14 in Tucson, Arizona including virtual events, drive-ins, drive-thrus, open-air events, at-home things to do and things to do with kids.

This is the second year that Tucson Petting Zoo & Funny Foot Farm has offered goat-a-grams — two baby goats delivered to your home or office in a stroller for your own private cuddle session.

After making sure the bird was OK, firefighters released it back outside 🐦