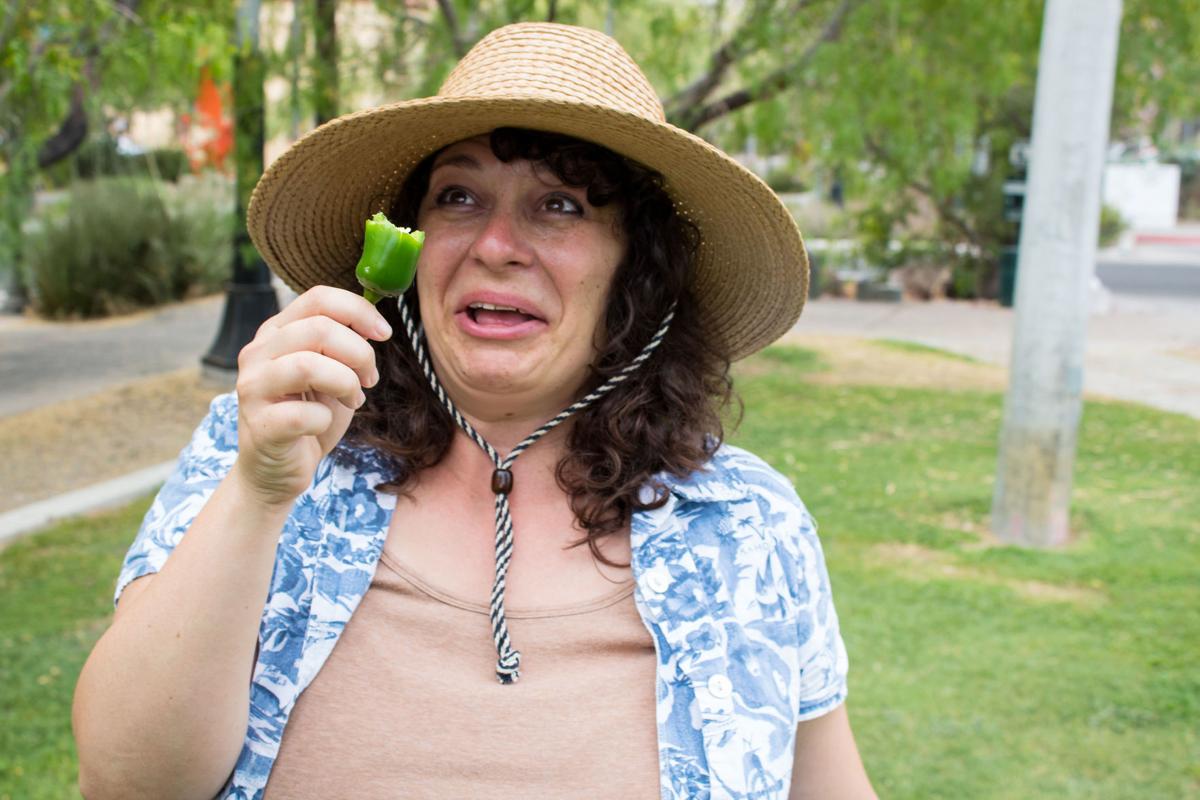 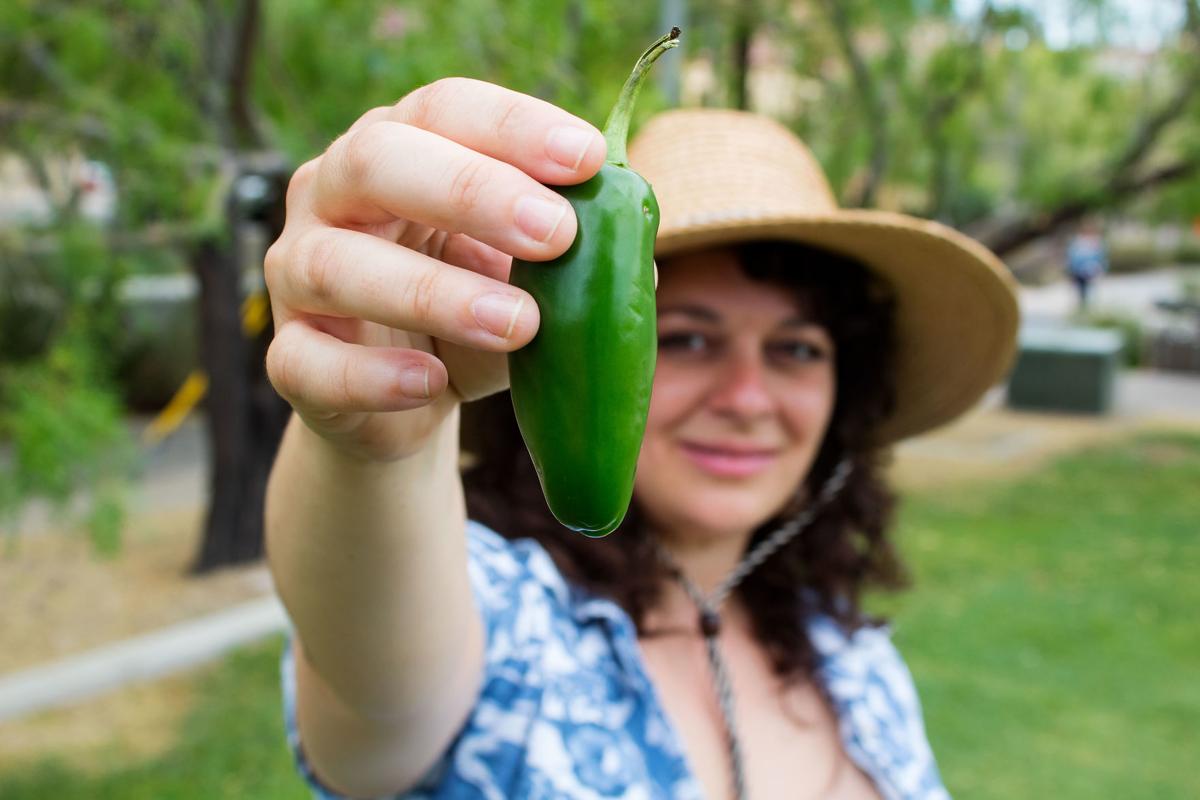 This Jalapeno is from the Johnny Gibson's Market in downtown Tucson 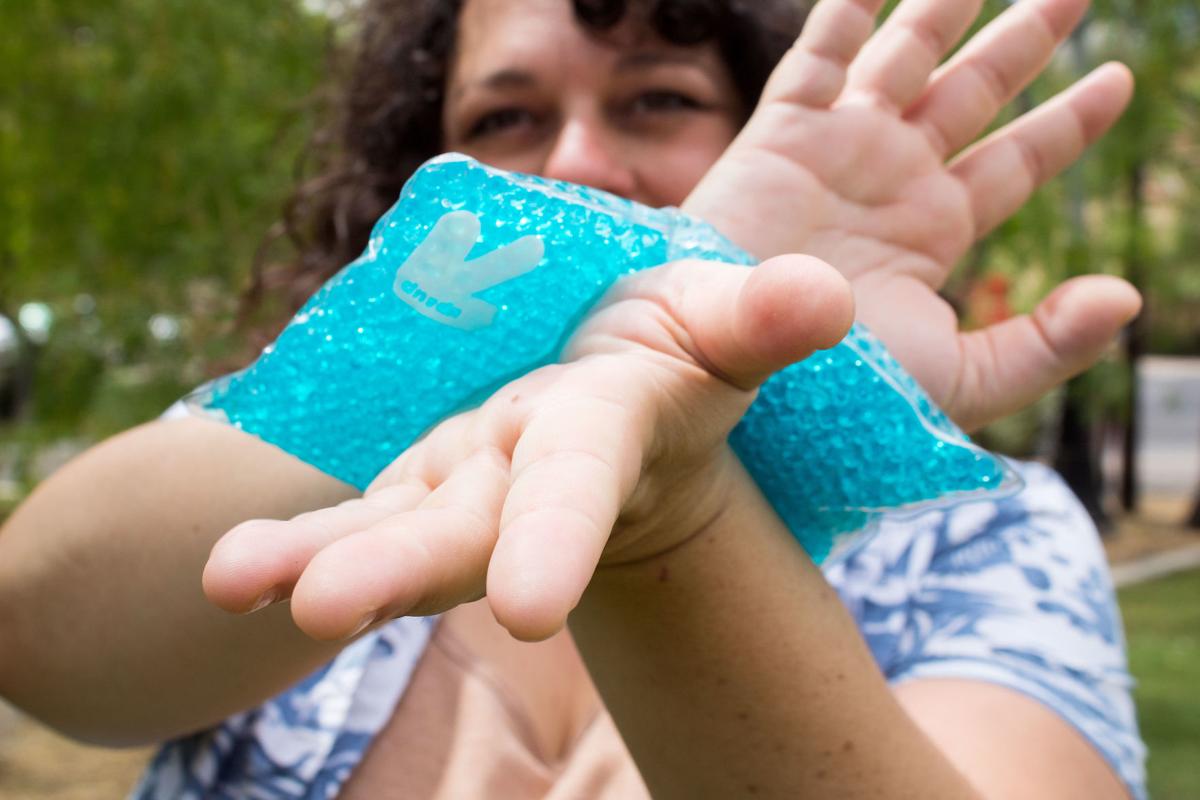 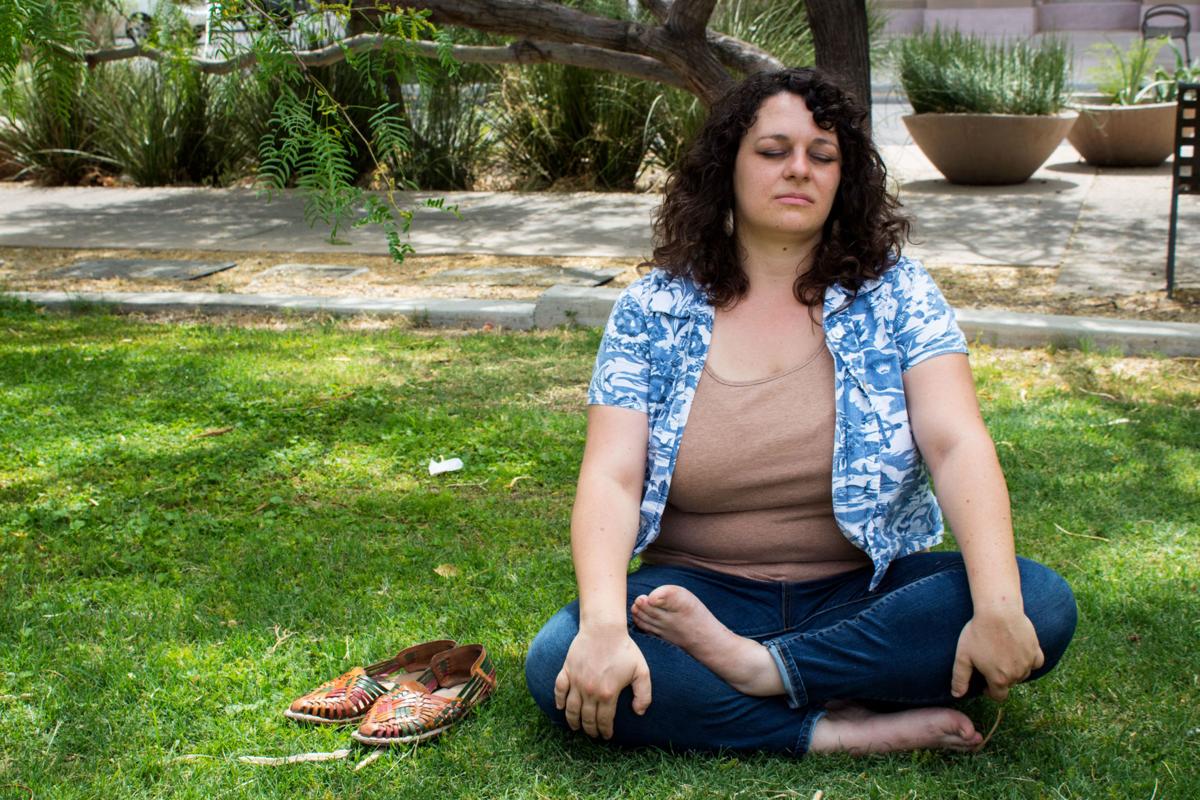 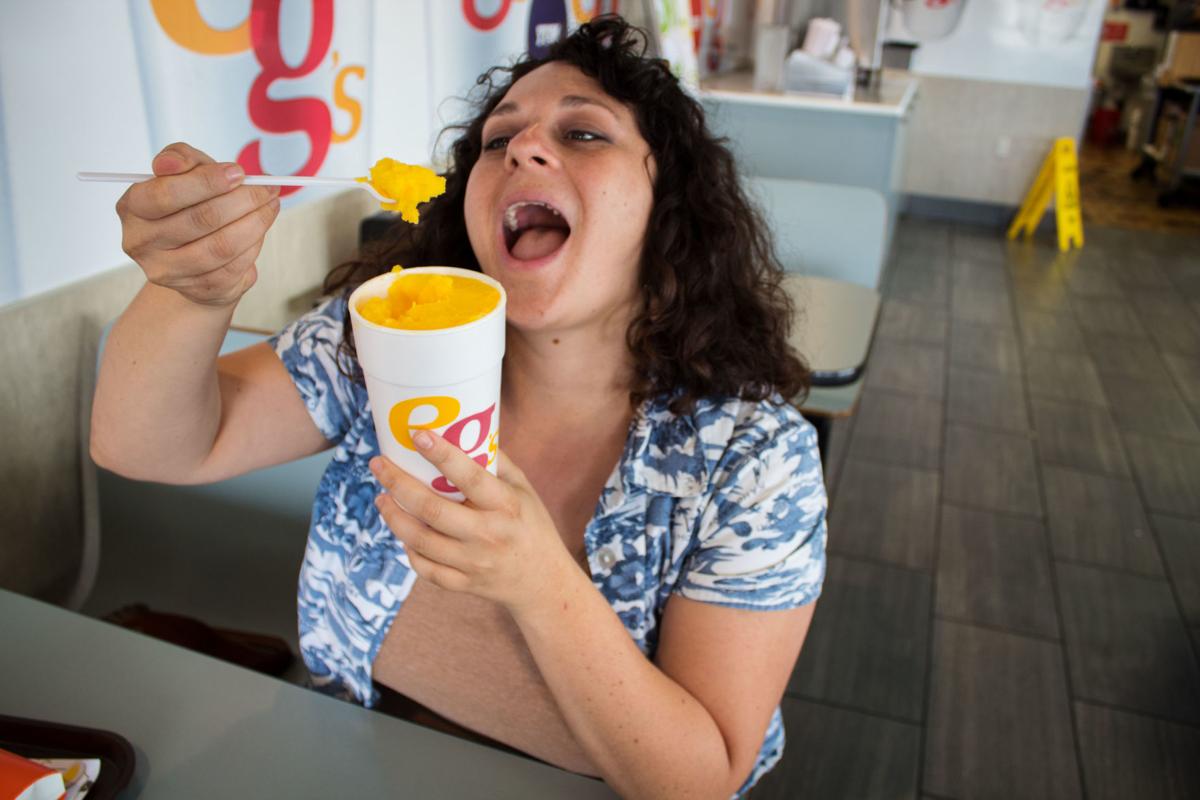 No denying the cooling powers of an Eegee's.

High temps are expected to remain in the triple digits for the next several days months years, so we (Andi and Sam) tried out some "unique" heat hacks that are all over the internet these days. Some of these techniques surprised us with how well they actually worked, and others were a hot mess.

Of course, the best way to keep cool is to stay hydrated and be indoors during the hottest time of the day if possible. None of these ideas were nearly as effective as that, but we sure had fun trying them out.

Now, on with the show.

Instead of reaching for a Polar Pop every time you feel the Tucson flames upon you, try eating something spicy. According to 2007 Seattle Times article, scientists say eating spicy foods will make you feel warmer at first and cooler after the fact. That's because of a phenomena called "gustatory facial sweating" — it happens when a person's blood flow and internal body temperature briefly increases, resulting in a sweaty face. So you basically turn into one big ol' swamp cooler.

To test this heat hack we had Andi snack on a jalapeño. A food writer's job isn't all glam, people.

Andi's thoughts: I guess I could have lugged out some salsa or a spicy lamb vindaloo, but ease and simplicity led me to the raw jalapeño. (Apparently Hillary Clinton eats these every day? Weird.) I went head first and took a big old bite, which seared the inside of my mouth with its seeds and stinging pepper juices.

I immediately regretted doing that, and began to actually become afraid that I was going to hurt myself, out in that sun. I ended up spitting a big portion of it out in a nearby trash can, but the pain was still there. At first my face was flushed and I felt kinda dizzy, but then I began to sweat, which is good! The sweating led to a short period of giddy euphoria, but I can't say I felt significantly cooler than before. Overall ...

Get your mind off the heat by thinking about the cold. Walter A. Brown, a professor of psychiatry at Brown and Tufts University, is an expert researcher of the placebo effect and says reading about cold weather can help your brain recall your own winter experience, thus making your summer environment more bearable.

Because Andi was a high school drama star back in the day and will forever love the 90s, we had our former "9th Grade Actress Of The Year" recite lines from the best and coldest movie we know ... "Titanic!"

Andi's thoughts: I wanted to recite a monologue from Alejandro González Iñárritu's 2015 film "The Revenant," but it occurred to me there wasn't much speaking done in that movie. So Samantha came up with the "Titanic" idea, which still allowed me to channel Leonardo DiCaprio.

I can't say the scene she chose was necessarily uplifting ... in fact it sounded rather painful in its own manner. (Not to mention the fact that thinking about Leonardo DiCaprio raises my body temperature, which kind of defeats the point.) Overall my body felt about the same as it did before I recited my lines, but I think it was because I didn't have enough time to really immerse myself in the role.

3. Cool off your forearms

Did you know kangaroos lick their forearms to keep cool? It's because they have don't have sweat glands and their saliva helps cool down their body temperature.

Andi decided to do the kangaroo method one better and swap the saliva for an ice-pack on her wrists.

Andi's thoughts: This experiment started out silly, but was actually pretty successful once I got out the ice pack. The human body has several pulse points where our blood vessels are close to the surface of our skin. So if you put something cool onto one of these points — the wrists, the neck, the inner thighs, etc. — you can physically cool off your blood and overall body temperature.

The licking didn't really work that well, and is probably not a good option if you're in public and have any kind of self respect. But fortunately the ice pack Samantha brought was still mostly cool, albeit not particularly icy. I put that on my wrists for a minute or two and dang, I really did feel much cooler!

4. Meditate while listening to soothing sounds

In our journey to find the weirdest heat hacks, we came across an article by Wanderlust that suggested listening to soothing sounds might have a cooling effect on the mind. There's not a lot of info out to support music's body cooling abilities, but we did learn that nice tunes have the power to reduce stress levels ... And who isn't stressed when it's 105 degrees outside?

We also came across a study where researchers measured the body temperature of meditating Tibetan nuns and found they were able to control their body heat production. Though Andi is no mediating Tibetan nun, she does have her zen moments, so maybe she has the ability to cool herself down with just her mind.

To test this we had Andi listen to the sounds of sea lions by the ocean as she meditated under a shady tree by Scott Ave.

Andi's thoughts: I love ocean sounds and the gentle hum of trickling water. Listening to that puts me into a relaxed state and allows me to eat copious amounts of sushi at that place on River and Oracle. But sea lions have a more aggressive cry, or at least a manner of befuddlement about them that's actually a little unsettling. Their comical mawing sounds made it difficult to meditate, and I was never able to achieve a state of inner calm.

I do think this idea could work though, especially after hearing about that monk who climbed Mount Everest in shorts. I guess he could control his mind and body so well, he wasn't actually cold. So I'm gonna chalk up this failure to lack of control and general hedonistic tendencies on my part.

What is an Eegee? Is it a slushie? An icee? Snow cone? Fancy sorbet?!? Tucsonans might never know the answer, but we don't care.

Since the invention of this snowy creation in 1971, Eegee's has become a summer staple in the hearts of the people who need a cool treat in the desert.

Andi's thoughts: Alright I admit this one was a little staged. I mean, of course stepping into a refrigerated restaurant and getting a slushie is gonna make you cooler! But after 45 minutes of eating hot peppers and reciting lines from "Titanic" in 110 degree weather, Eegee's sounded like a good idea. Plus, Samantha got some ranch fries and let me have a few bites, which didn't necessarily cool me down but did make me feel very happy. In this sweltering heat, it's the little things that count ...

Editor's note: This story was originally published in 2018.

Do you have an abundance of prickly pear fruit in your Tucson yard? Here's what to do with it

It's prickly pear harvesting season in Tucson. We talk to two experts for tips on harvesting the fruit, preparing it and cooking with it. Prickly pear margaritas, here we come.

The Tucson Botanical Gardens adopted a desert tortoise this week and is accepting community suggestions for her name. The tortoise will live in an enclosure in the Native Crops Garden.

Reid Park Zoo's cute baby elephant Penzi is now 4 months old and still as playful as ever. Mapenzi and her big sister Nandi were both born in Tucson, to the delight of locals. Reid Park Zoo is still closed.

Tucson organizer Jennifer Phelps offers tips for how to make the most of your space during the coronavirus pandemic. These are easy DIY home projects that are inexpensive but make a big impact.