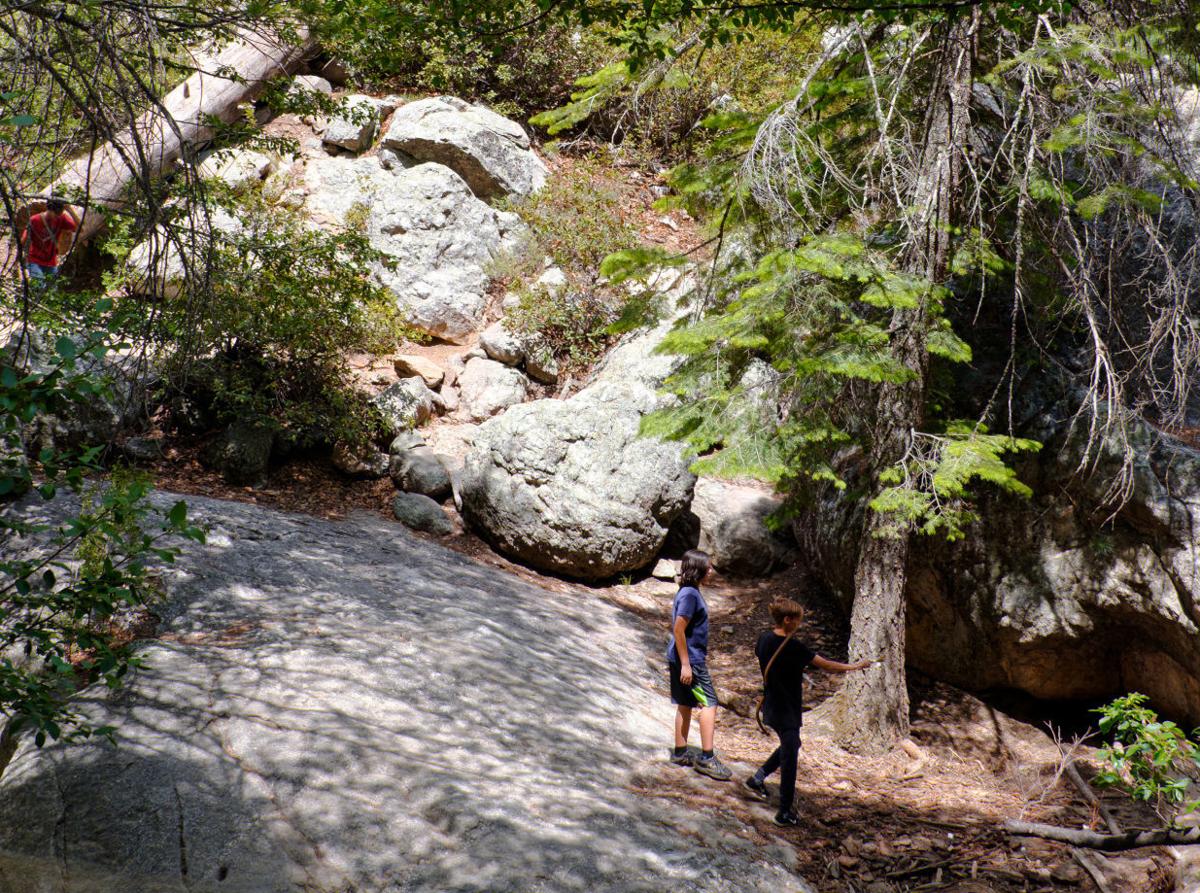 Two boys play on a boulder at the Marshall Gulch Trail at Mount Lemmon, where temps are at least 20 degrees cooler than Tucson in the summer.

Freshly made fudge at the Mt. Lemmon General Store and Gift Shop in Summerhaven. There are eight flavors that are constantly in rotation and the fudge is made every week by shop owner Leanne Mack. 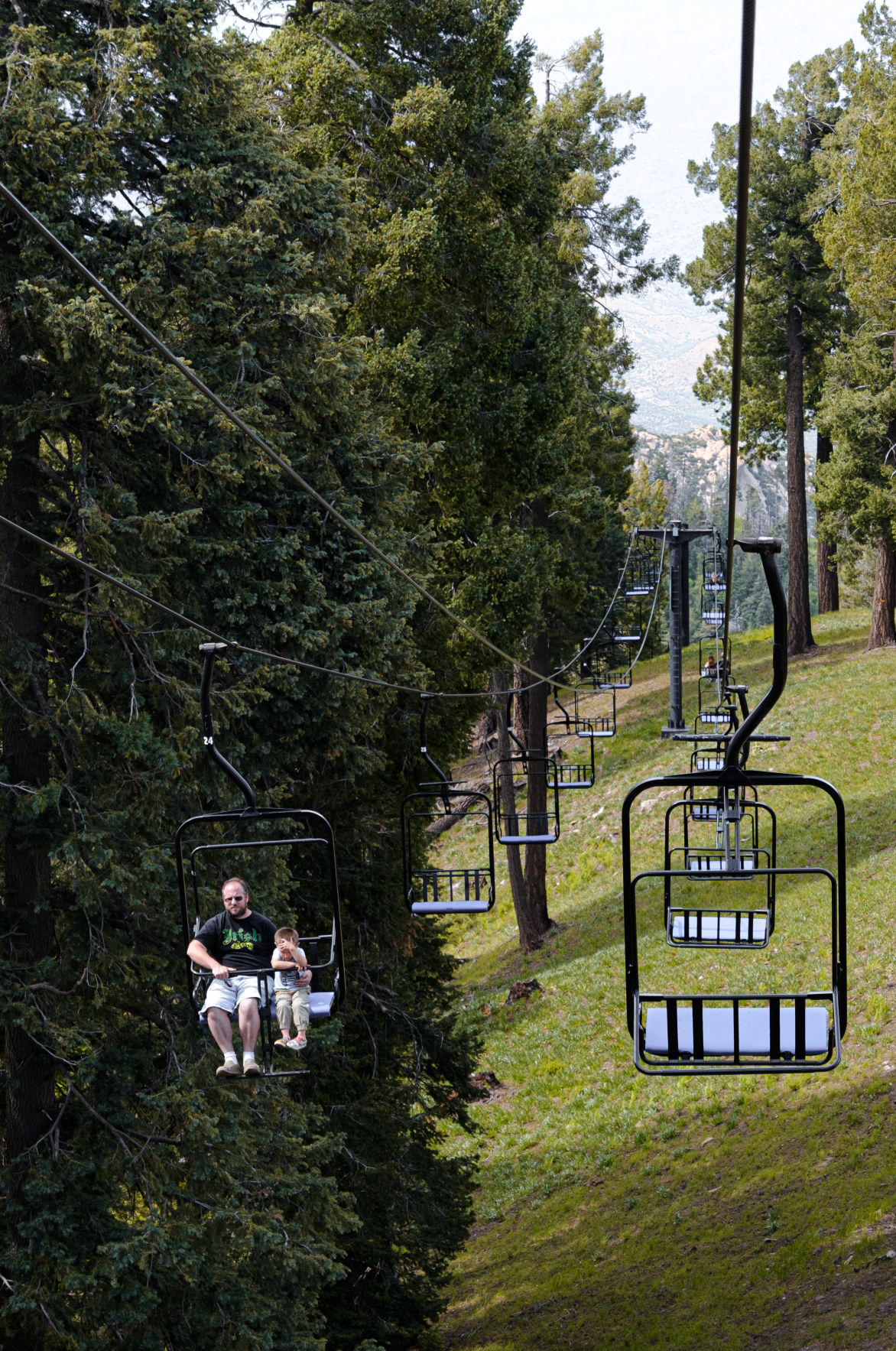 People ride the ski lift at Ski Valley at Mount Lemmon. The lift still runs in the off-season Thursday through Monday for slow-paced scenic rides. Tickets are $15 for adults. 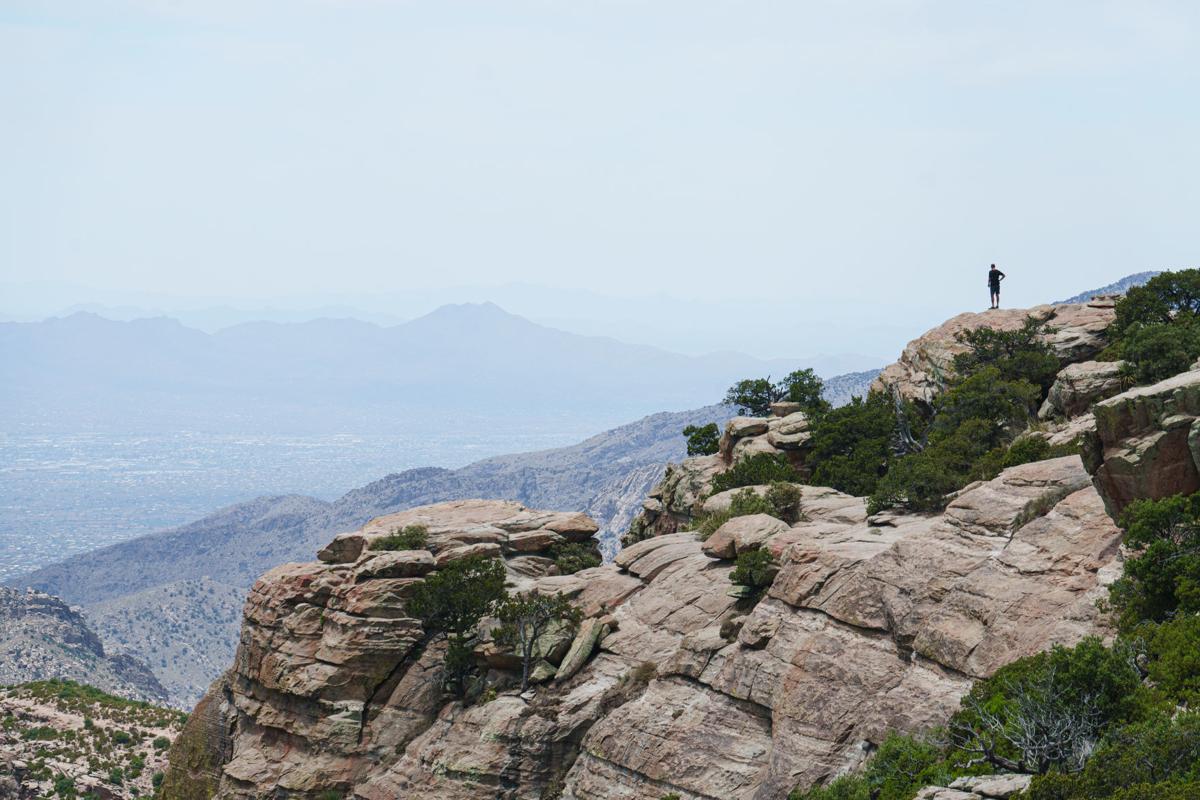 A man looks over Tucson at Windy Vista Point at Mount Lemmon. Windy Vista point is open year-round and is ADA accessible. 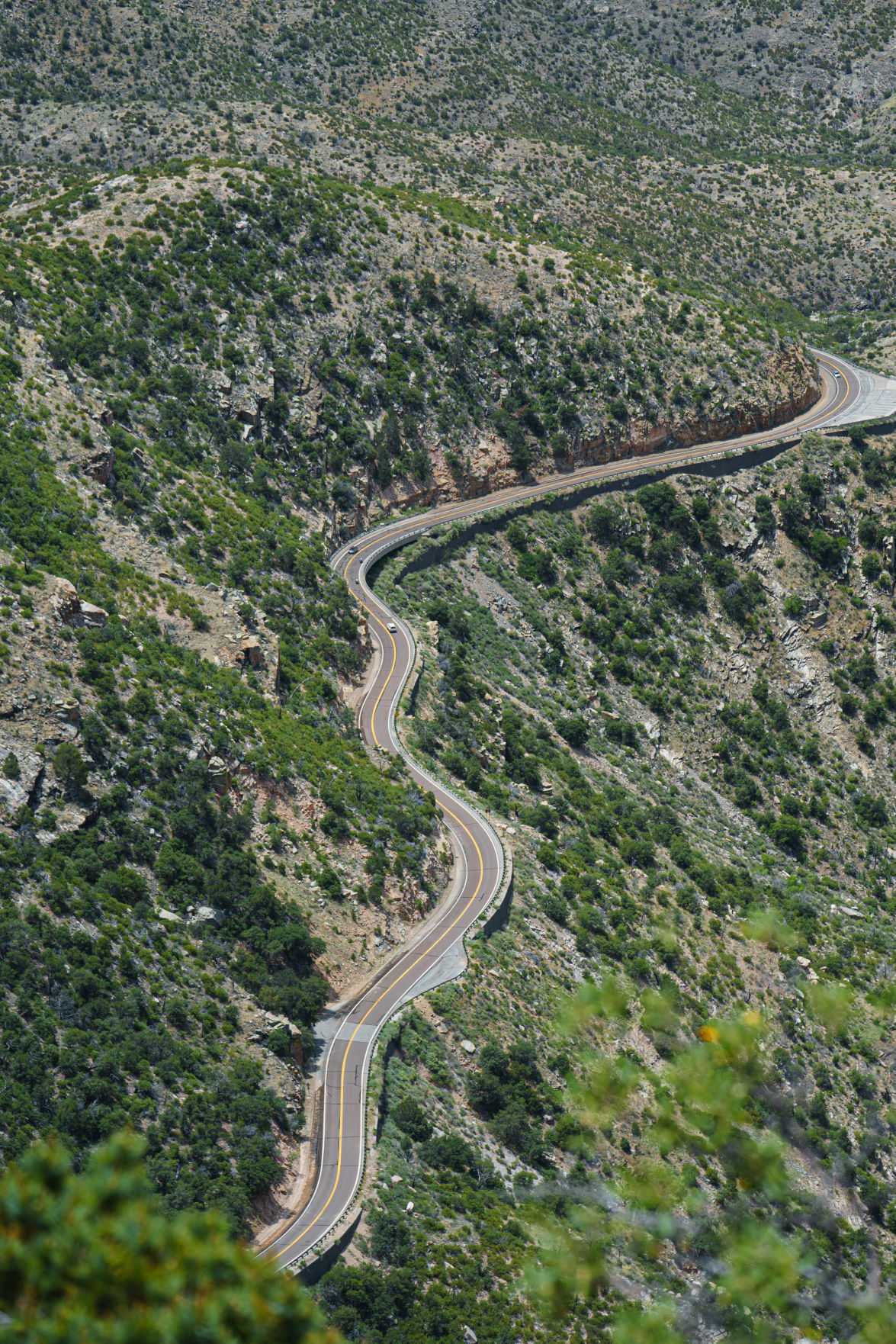 The road up to Mount Lemmon is a little over an hour drive from Tucson. 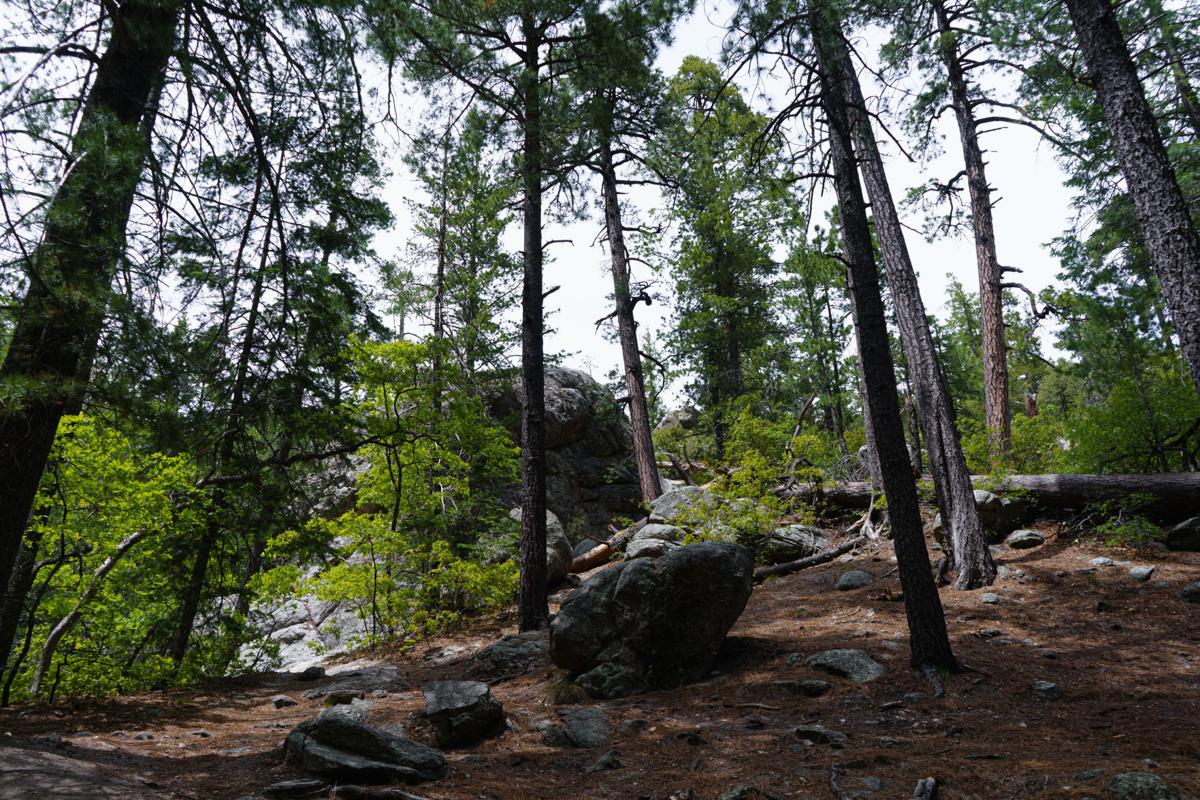 Views from the Marshall Gulch Trail at Mount Lemmon. The trail is 4.4 miles long and has an 866 foot elevation gain.

That is what the temperature gauges said on a recent trip to Mount Lemmon. And the difference in temperature is reason enough to load the car and head for higher ground.

Take the Catalina Highway an hour northeast of Tucson, up some 9,100 feet through a winding stretch of saguaros, and the landscape and temperature goes from dusty brown and punishingly hot to lush and green with a cool breeze.

As the cacti begin to disappear on the incline, towering pine trees take their place and before you know it, it’s 20 to 30 degrees cooler than Tucson’s triple-digit highs during the summer.

About half an hour up Mount Lemmon Highway sits Windy Point Vista. As noon approached on this weekday, cars filled the spaces on the side of the road and camera shutters were clicking as visitors captured the expansive view overlooking Tucson — from the Davis-Monthan Air Force Base aircraft boneyard to "A" Mountain.

Windy Point is even more impressive later in the evening, acting as a free front-row seat for the sunset.

Summerhaven sits just 1,000 feet below Lemmon’s peak, a small, picturesque community nestled in the forest with several restaurants and shops. The charmingly rustic Sawmill Run Restaurant is one of three main restaurants in the area. Its menu offers salads, burgers and sandwiches including a pastrami-stuffed Rueben with sauerkraut on crispy rye toast served with a side of seasoned fries. The bar there offers draft beer, snow cones and “punny” cocktails like the“Mount Lemmonade.” The patio area with a view of Summerhaven’s hillside cabins was a popular choice for the dozen or so visitors coming in during the relaxed weekday lunch “rush.”

Just down the road, the Mt. Lemmon General Store and Gift Shop sells toys, clothes, food and handmade gifts for all ages. Leanne Mack, the general store’s manager, stood behind a glass display counter filled with over a dozen flavors of homemade fudge, from cookies and cream to chocolate coconut almond. Mack said they routinely rotate flavors with the season throughout the year.

Mack said it’s not just the homemade fudge that brings people up the mountain. Hiking enthusiasts come and go all day, choosing from various trails including the 4-mile Aspen Trail or the “not too advanced” one-mile Meadow Trail that offers a view from Lemmon’s summit.

As Kristi Lloyd lounged in the shade of Marshall Gulch with her furry companion Nico, her sons Jackson and Dylan collected arrows from around the shallow, barely-flowing creek with their friend Adrian. The three tweens were trying their hands at archery, using wooden bows they got at a Renaissance fair. Lloyd, who is originally from Louisville, has been bringing her kids up to Lemmon several times a summer since they were small.

“Summers are different here than when I grew up in Kentucky,” Lloyd said. “You can’t just have the kids run around until dark without some water, so it’s a lot of going to the pool or coming up here to the mountain.”

On that sunny day, Marshall Gulch, the picnic area at the end of the highway, was scattered with folks breathing in the crisp, pine-scented air. Parents and children lounged around picnic tables while a trio of birdwatchers hid behind their binoculars as they tiptoed around the trails. One couple sat side by side in matching lawn chairs under a tree, silently absorbed in a set of novels.

A little bit above the village is the Iron Door restaurant and Mount Lemmon Ski Valley. Although the snow is long gone, the ski lift still operates Thursdays through Mondays for slow-paced scenic rides. There can be a little bit of a wait on weekends, but on weekdays, you can get right on. Starting at the bottom of the summit in a vibrant green field, the 30-minute lift ride passes by endless rows of pines that line either side of the lift’s path. The faint whir of the cables rushing along the rail is quickly drowned out by the chorus of birds chirping and the midday breeze whistling through the treetops. Occasionally someone on the lift sneezed — likely allergies — and the sound echoed down the mountain in a way that made nearby passengers chuckle.

Once the lift reaches the peak, there is a small trail that offers a view of Tucson beneath the cloudless sky as the sun shines as far as the eye can see, like a scene straight out of “The Lion King.” After you take in the view and pull out a camera for some shots of the landscape, it’s time to board the lift once again — but not before passing the lift operator station where the radio doles outs 1970s rock ‘n’ roll hits.

If hiking through aspen trees and ponderosa pines, fishing at Rose Canyon Lake and picnicking on the mountain isn’t your thing, try some other activities Leanne Mack at the general store recommends. There are Pilates and yoga classes at the community center, rent an electric bike at the new Pedego kiosk or shop at the Mt. Lemmon Artisans Market to buy handmade gifts and treats that benefit the Southern Arizona Animal Food Bank.

Mount Lemmon’s temperatures tend to stay in the 80s through late August and if you’re going to go up, try weekdays when the traffic is lighter and more parking spots are available.

But whenever you go, you’ll be bolstered by this simple fact: it’s at least 20 degrees cooler.

Take the whole family on a hike while the weather is sweet.