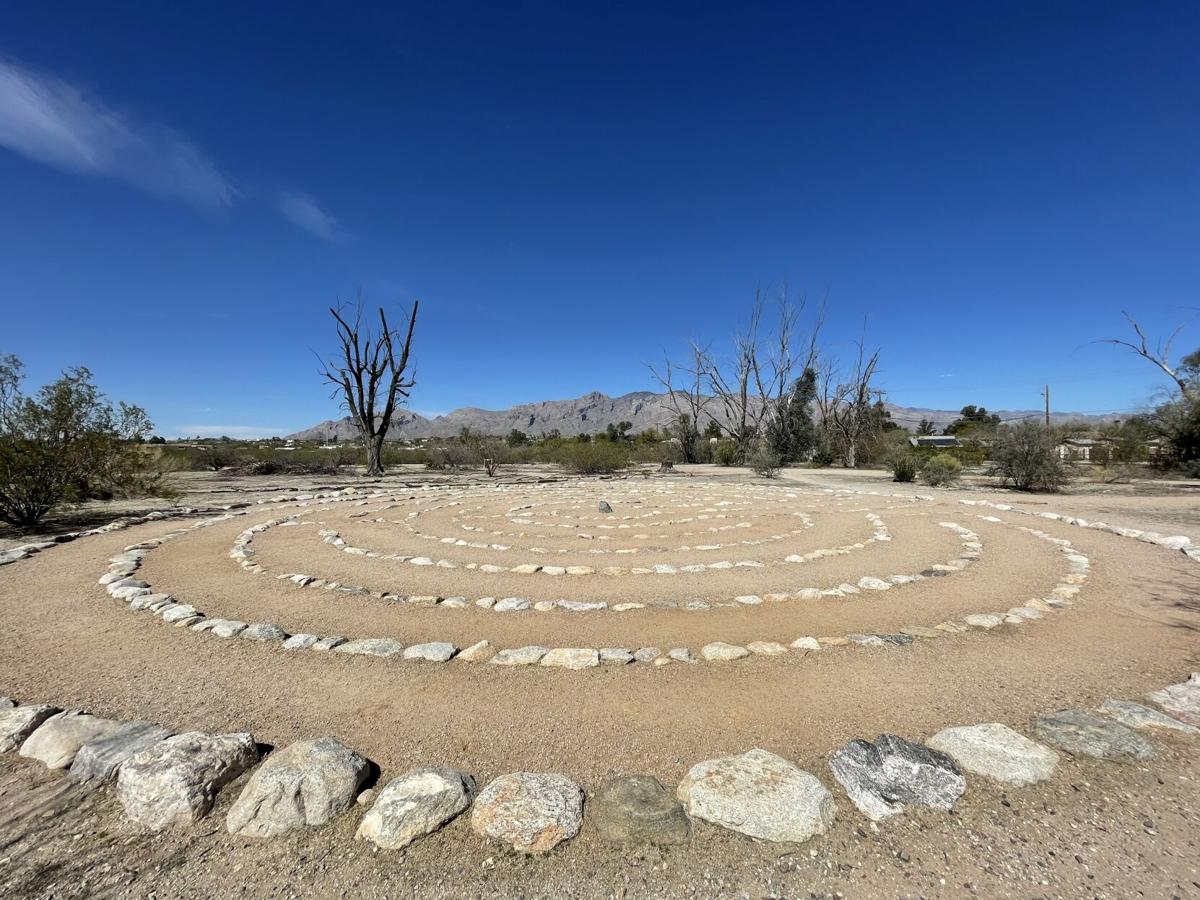 Enjoy clear views of the Santa Catalina Mountains while walking through the labyrinth at Rio Vista Natural Resource Park. 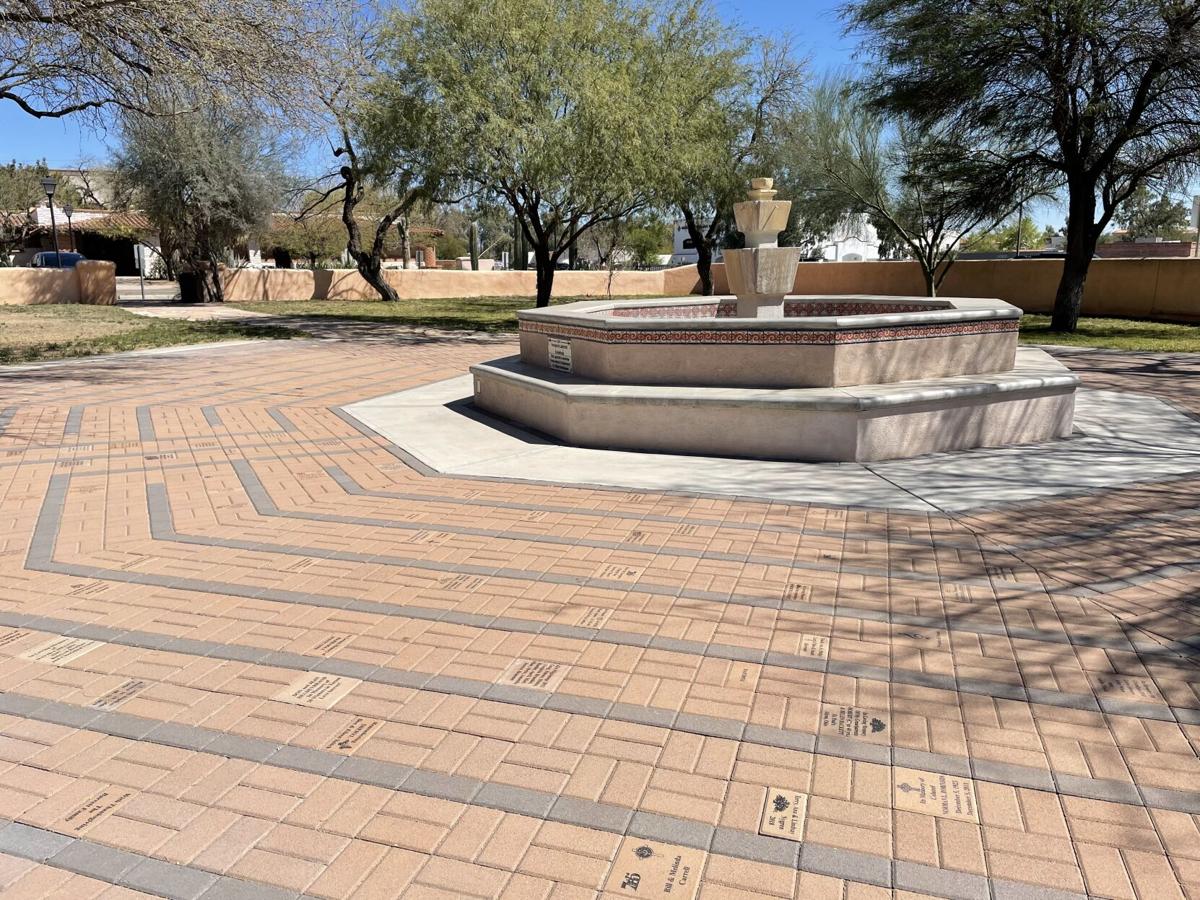 The labyrinth at St. Philip's in the Hills is shaped like an octagon. 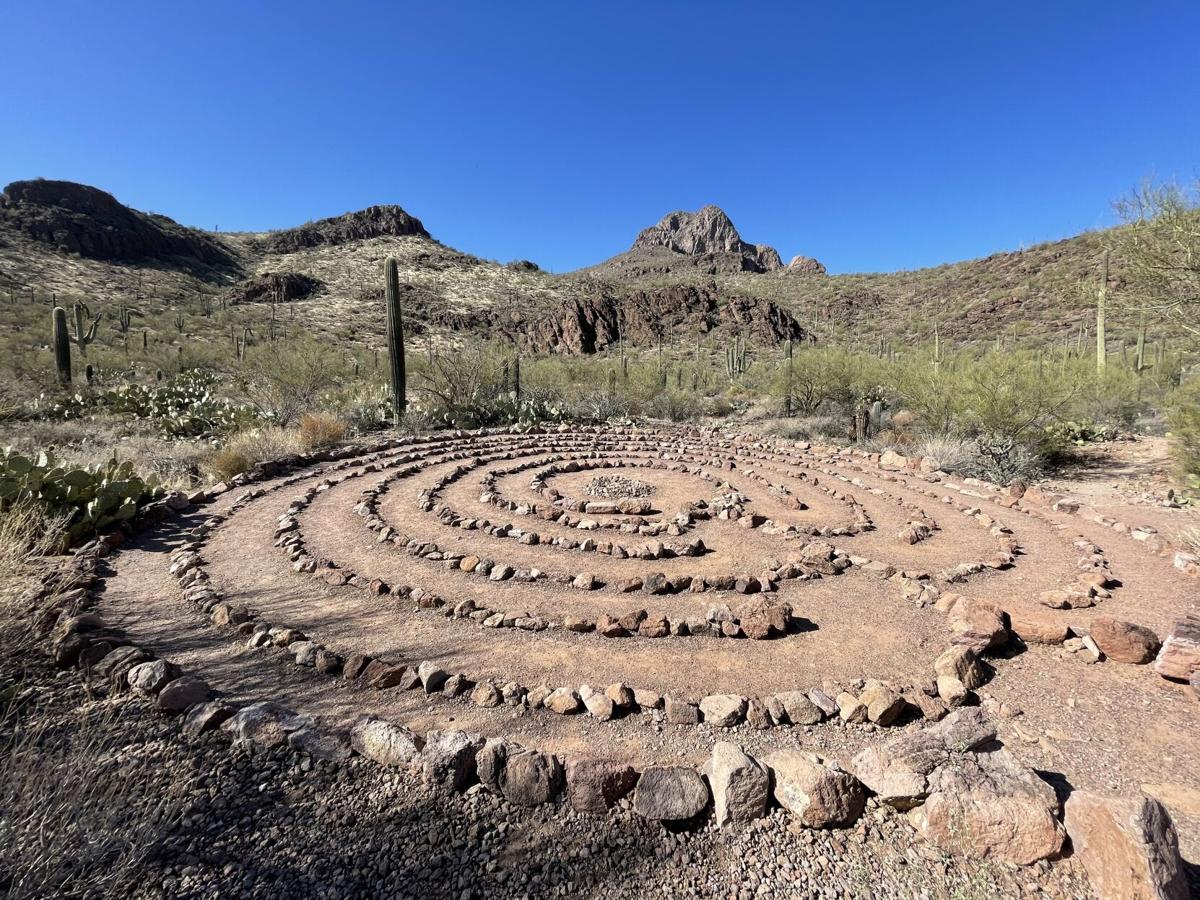 Sanctuary Cove is located at the base of the Tucson Mountains, and Safford Peak, the bell-shaped mountain can be seen while walking the labyrinth.

Sometimes you just need a peaceful moment out in nature.

That's what Sanctuary Cove founder Elmer Staggs, had in mind for the 80-acre nature preserve located at the base of Safford Peak in Marana, part of an original 120 acres he homesteaded in 1917. The property offers several opportunities to enjoy the tranquility of the desert landscape including a mile-long nature trail loop, a small chapel and an amphitheater.

"He wanted to create a place for people to get away from the constant barrage of just everyday issues and noise and complications that life brings us and he wanted to give people a place for quiet prayer and reflective meditation," says Annie Bunker, who is on the board of directors of the All Creeds Brotherhood, the non-profit organization that operates Sanctuary Cove.

For nearly 30 years, Bunker and her husband Chuck Koesters who now live in Hawaii, were the caretakers of Sanctuary Cove and it was during their tenure that another place for reflection was built — a seven-circuit labyrinth built with large rocks from the property by many people affiliated with the cove including other board members, volunteers, and others connected to the preserve. The labyrinth was completed in 2006 and is a place for reflection and release, Bunker says.

"As you walk the labyrinth ... you take in your question, your concern, your prayer, your blessing, your meditation and you really focus on how your feet are moving on the earth, on the spiral. As you come into the center reflect on what this thing is that you want to release, that you want to send energy to and send it out into the universe," Bunker says.

"Look up at the sky, look down at the earth and send it out, let the wind carry it, let the light carry it and give yourself the time you need to do that in the center and then when it feels right, walk out and as you walk out just receive new renewed energy as you pass around each corner and out the entrance."

For thousands of years, people have walked the (usually) circular formations for relaxation, meditation, prayer, ceremonies, or just for fun, according to the Labyrinth Society, a world-wide group of labyrinth enthusiasts.

The society maintains a searchable Labyrinth Locator where you can find photos, addresses and information about labyrinths all across the globe. There are around 40 in the Tucson area, many of which are on private property, but several can be found at parks, churches and other public spaces.

Here are a few to start with.

Sanctuary Cove is an idyllic place to spend a spring morning. A sign at the entrance to the labyrinth reminds guests to soak in the surrounding natural beauty, take time to clear your mind and to be aware of your breath as you walk the path. There's a bench near the entrance where Bunker suggests spending some time doing all of the above before starting your labyrinth walk. There's a good chance when you get to Sanctuary Cove, you won't want to leave, but be aware that the gate to the property is locked daily at sunset, so be sure to time your visit accordingly.

This 40-acre natural desert park bordered by the Rillito River to the north has a few walking paths, a play area, and it's also home to a labyrinth located in a quiet corner on the eastern boundary of the park. The sweeping views of the Santa Catalina Mountains are a highlight of this spot.

St. Philips in the Hills

The labyrinth at St. Phillip's in the Hills is modeled after one that can be found at the Cathédrale Notre-Dame d'Amiens, in France, according to the church's website. It's shaped like an octagon and has a nine-circuit brick path surrounding a fountain in the center. The church's website says it takes about 20 minutes to complete a meditative walk around the labyrinth. While the labyrinth is located near the busy intersection of River Road and Campbell Avenue, the many birds chirping in the surrounding trees help set the scene for a relaxing walk.

The labyrinth at Cat Mountain Lodge, a bed and breakfast, on Tucson's far west-side is likely the most uniquely designed mural you'll find in town. It features a six-circuit path, and though you can't quite tell from the photo above, it's shaped like a turtle. The design was inspired by the lodge's resident tortoise named Juan Wayne, according to the lodge blog. While the labyrinth is located near the lodge, while you're visiting be sure to stop by the adjacent Cat Mountain Station, a small collection of shops and a café.

107 amazing Tucson murals and where to find them

When Victoria Reynolds was gifted sunflower seeds in February, she planted them in a community area in her neighborhood. When the HOA said they'd be putting gravel in that area, she wanted to find a way to save the flowers.

Five fun ways to get outside with the family this April 2021 around Tucson, Arizona.

32 things to do in Tucson this April

Things to do this April 2021 in Tucson, Arizona including virtual events, drive-ins, drive-thrus, open-air events, at-home things to do and things to do with kids.