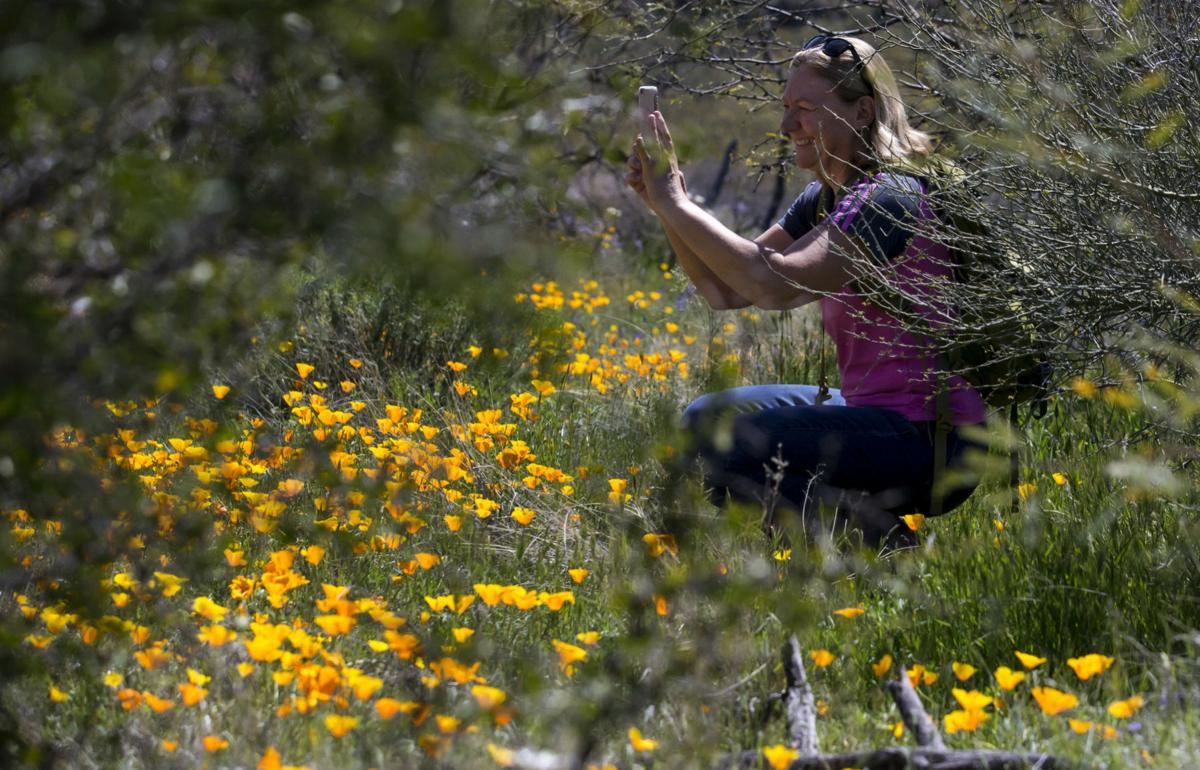 Edita Navratilova, right, takes pictures of a group of Mexican and California Gold Poppies on the Sutherland Trail in Catalina State Park. 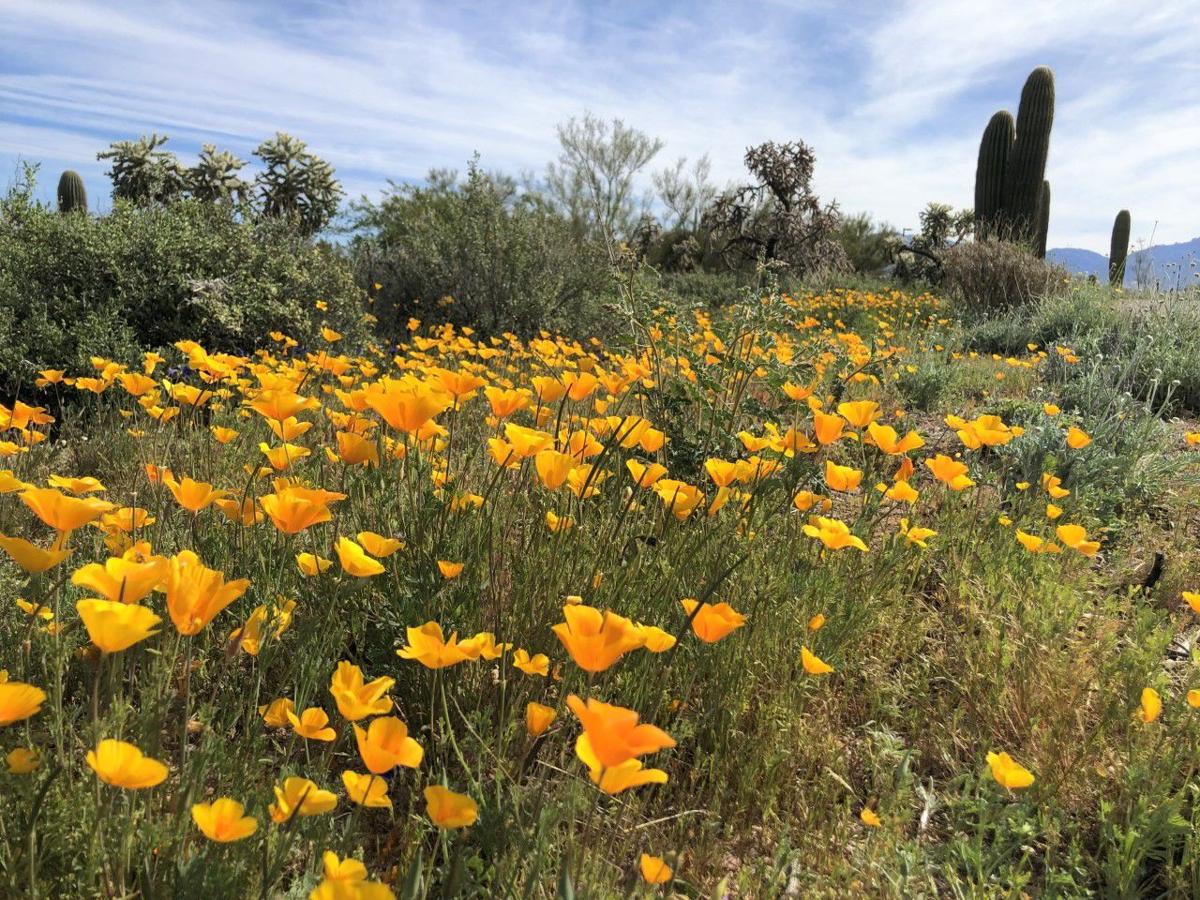 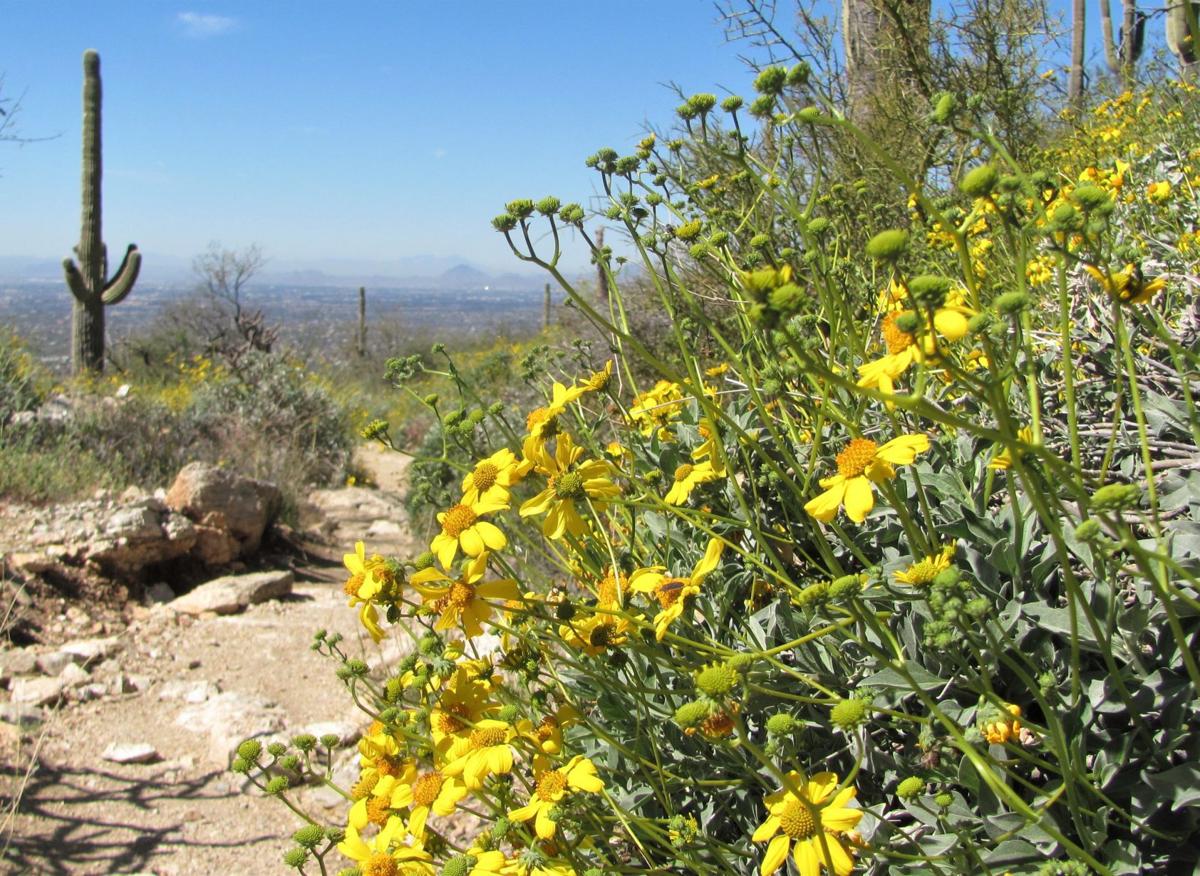 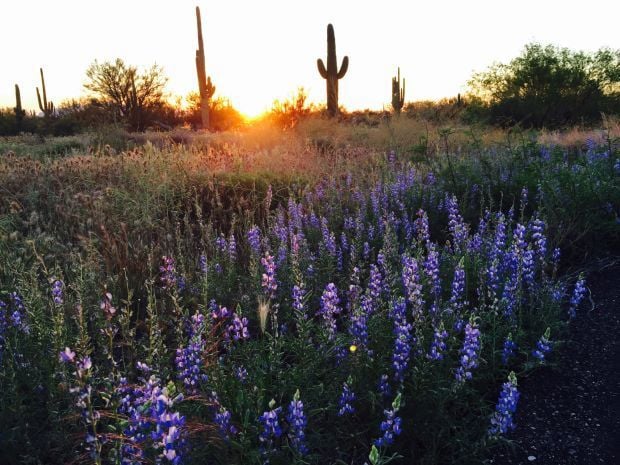 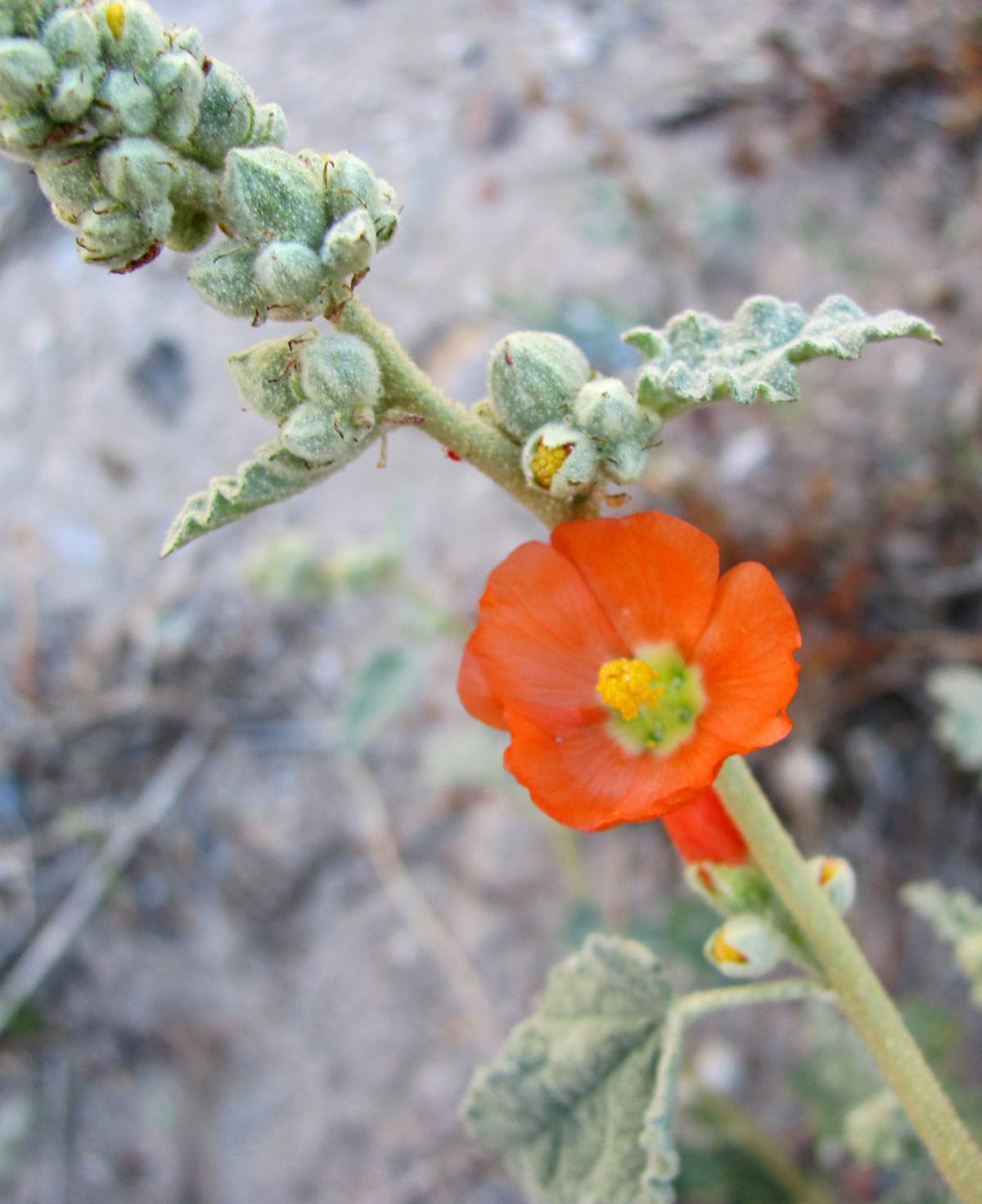 Globe mallow. Photo taken along the Catalina Highway on March 12, 2013. 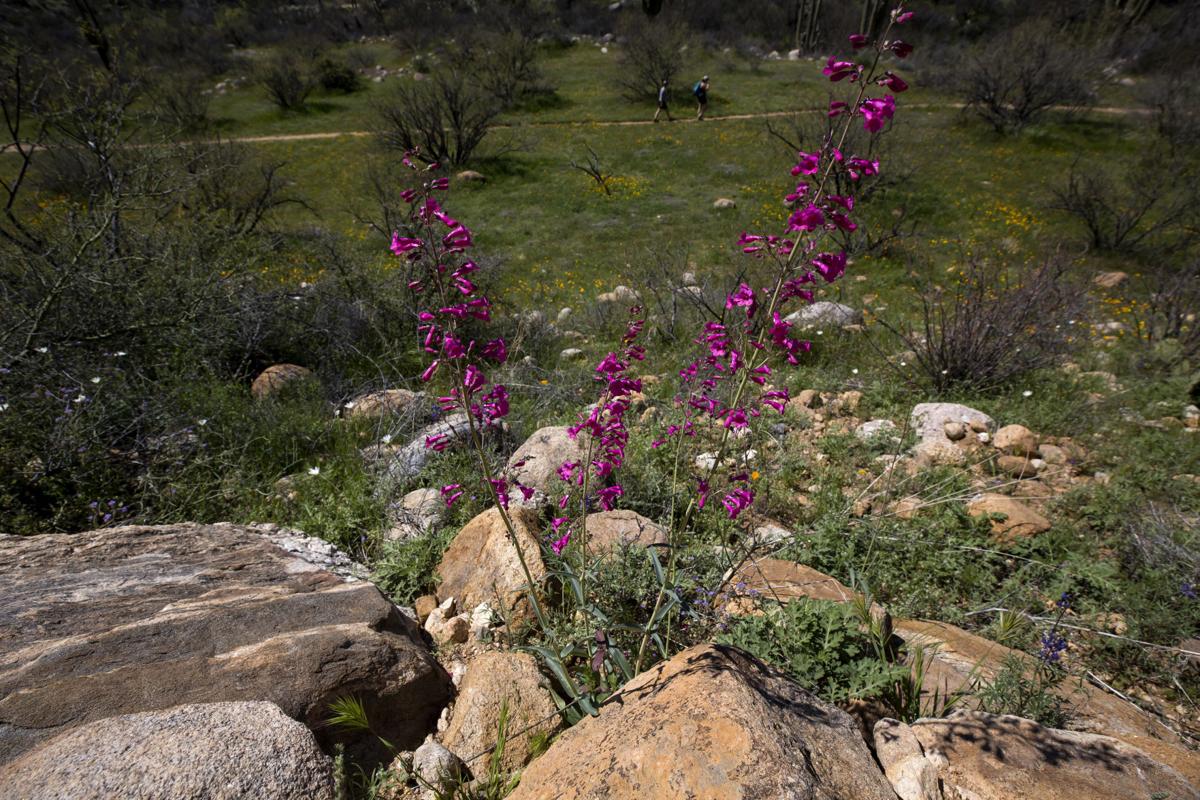 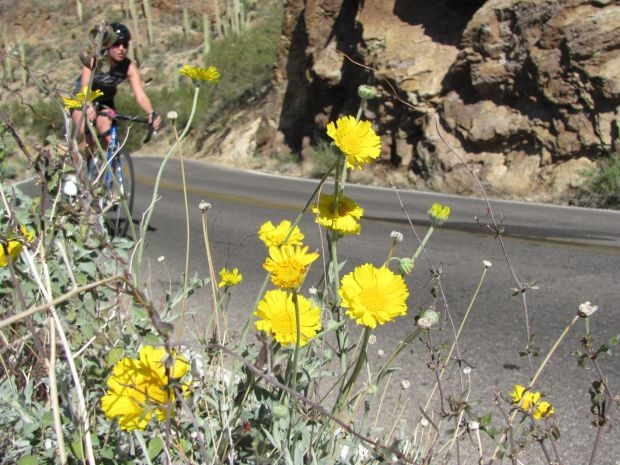 A cyclist on Gates Pass west of Tucson pedals past desert marigolds in brilliant bloom smack in the middle of winter. 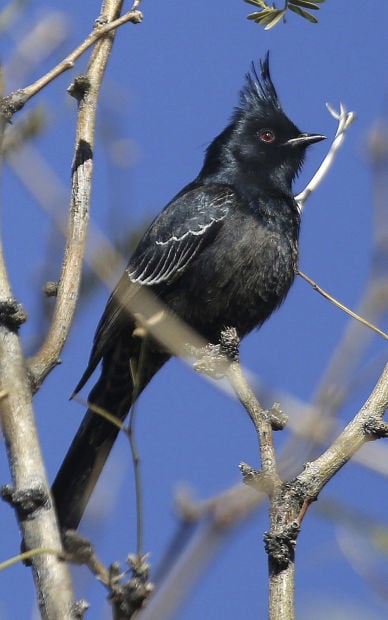 A male phainopepla with a nice gloss hangs out in a mesquite loaded with desert mistletoe at Sabino Canyon. 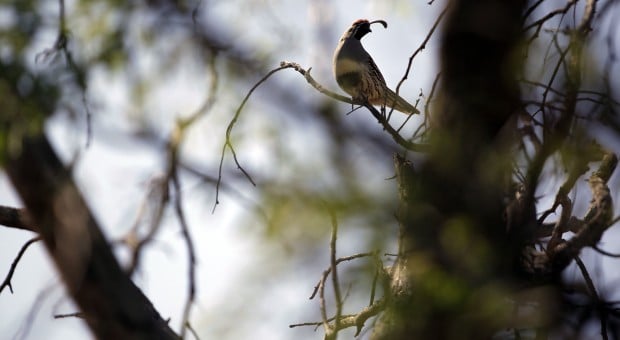 A Gambel's quail sits in a tree at the Atturbury-Lyman Animal Sanctuary. 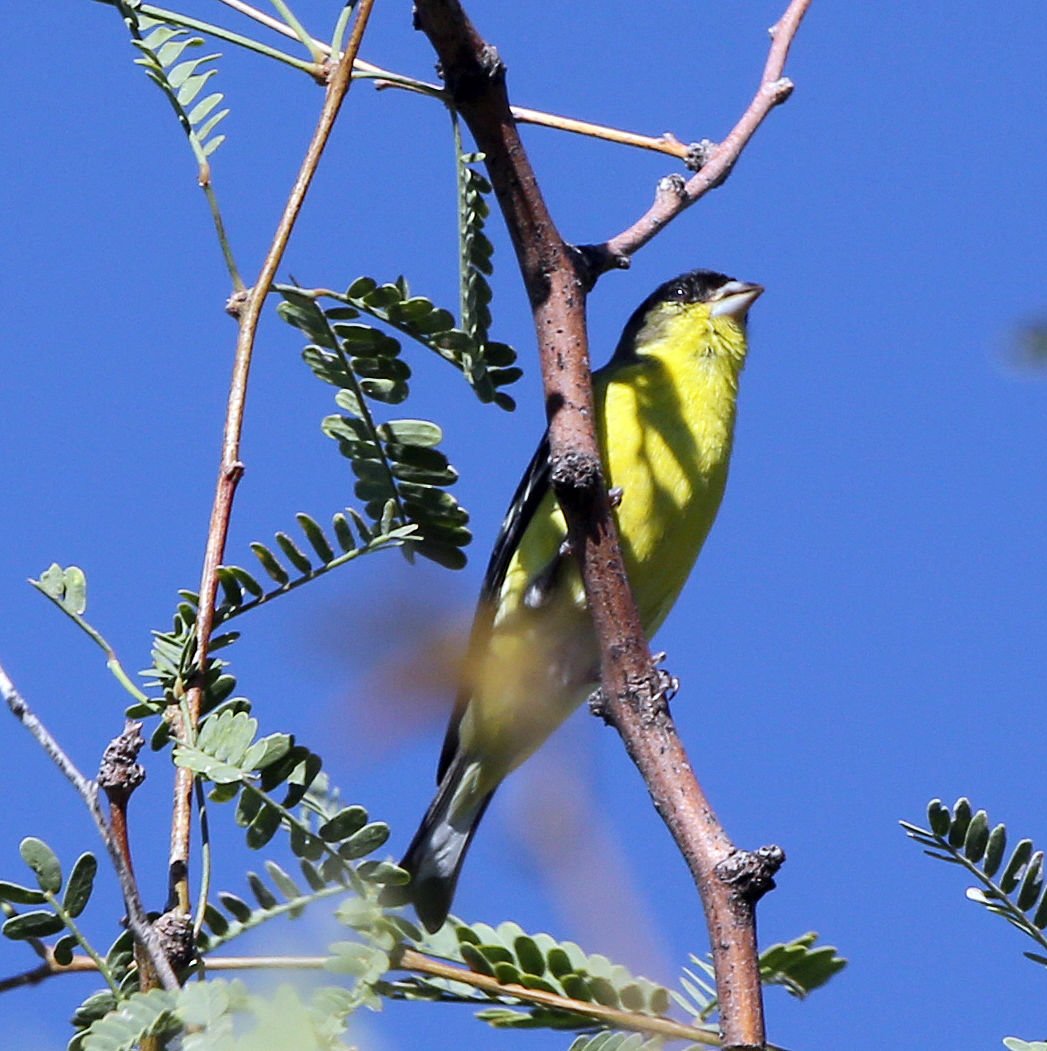 This pretty Lesser Goldfinch bird was hanging out on this limb as a number of bird watchers were up early this morning checking it out as they took part in the "Wake Up With The Birds" walk at Agua Caliente Park Thursday September 5, 2013) in Tucson, Arizona. Photo by Benjie Sanders / Arizona Daily Star. 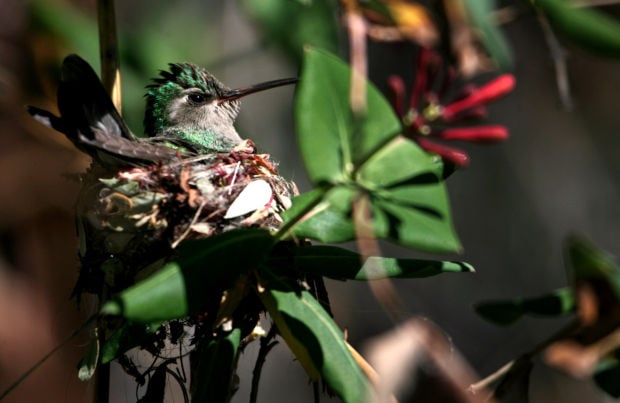 A Costa's hummingbird sits in a nest in the hummingbird aviary at the Arizona Sonora Desert Museum in Tucson, Ariz., Friday Mar. 7, 2008. Photo by Greg Bryan/Arizona Daily Star

So, in the name of social distancing and also not going stir crazy, you're taking another walk through your neighborhood.

We are so thankful it's spring in Tucson. Because, global pandemic or not, the birds are still singing, and the sun is still shining.

And the wildflowers are still blooming, just don't expect to see too big a show in 2021.

"Because of the dry winter, we are not going to have much in terms of spring blooming this year," Massimo Boscolo, the horticulturist for the Arizona-Sonora Desert Museum, said via email. "Even perennial plants are looking drab and many are just beginning to leave out now."

On recent Tucson area-hikes Boscolo says the landscape is as dry as ever.

"So far the 'best' wildflower blooming I've seen was last weekend on the side of the road to Oracle, where there are a few populations of lupins already in bloom," he says.

As you continue your own neighborhood wanderings this week, add some education to your exploration. Here's a guide to some of the most common birds and wildflowers you may encounter.

Mexican gold poppies: You'll find these brilliant, orange cup-shaped flowers growing from a plant with fern-like leaves from around March through May. These poppies are a subspecies of the California Poppy, and it's pretty difficult to tell the two apart, according to a guide by the Lady Bird Johnson Wildflower center in Texas.

Brittlebush: During the non-blooming seasons, the brittlebush is an unassuming little shrub hanging out along slopes and hillsides. But as spring approaches, long stalks will grow out of the plant and small yellow flowers will blossom. You can find flowers blooming from late winter to early spring. This shrub is a member of the sunflower family! 🌻Read more brittlebush facts from the Arizona-Sonora Desert Museum here.

Lupine: There several species of lupine you can find in the Southwest. Most are identified by their their small, purple-blue flowers and slender stocks.

Desert globe mallow: Orange globe mallows grow in sandy or gravelly soil, so you're likely to see these roadside. Globe mallows are perennials and look like a shrub, according to the Arizona-Sonora Desert Museum. These bloom mostly in spring, but can be coaxed to bloom during other parts of the year, depending on rainfall.

Parry's penstemon: These bright pink flowers on tall stalks are beloved by hummingbirds. You're most likely to see them from late winter to early spring, according to Civano Nursery.

Desert marigold: These yellow flowers have long stems that branch out from gray-green leaves. Desert marigolds are perennials and love sandy or rocky soil, which is why you see them roadside, according to the Arizona-Sonora Desert Museum. They mainly flower in the spring, but you might also catch them blooming other times of the year due to rainfall and humidity, according to Civano Nursery.

Verdin: These year-round desert dwellers make those big nests of sticks in palo verde and mesquite trees. They're tiny song birds that have a three-part call that likely everyone in Tucson has heard, says Jennie MacFarland, a bird conservation biologist with the Tucson Audubon Society. They're small and gray with yellow faces — like they dipped it in mustard, MacFarland adds.

Phainopepla: If you've got mistletoe, you've probably seen these guys. The males look like shiny, black cardinals, and the females are a more subdued gray, MacFarland says.

Lucy's Warbler: You're more likely to hear these than seen them. MacFarland says they just arrived in Tucson, and you can hear them singing everywhere. They're gray all over and the males have a bit of a rusty color on their head and the base of their tale. They ❤️mesquite trees.

Gambel's Quail: We've all seen these speedy little friends scurrying through the desert, a trail of babies trotting behind them. MacFarland says they're just beginning to lay eggs now.

Lesser Goldfinch: This is another songbird with lots to say. The male has a yellow belly with a black back, and the female is a pale, lemon color, MacFarland says.

March exclusive Tucson emoji coloring page. Become a #ThisIsTucson member to get it.

Our members support the work of this five-woman team so we can continue to share stories that keep our readers connected to the community and discover new reasons to love Tucson.

18 local outdoor markets and art fairs to shop this spring

9 things you must do when you move to Tucson

Whether you're new here, or just looking for new things to do here are 9 ideas for getting to know Tucson a little better.

Hunt for eggs, enter to win prizes and see the Easter Bunny at Tucson area parks

Since 2020 was one of the hottest and driest years on record in Tucson the conditions just weren't right for colorful annuals like poppies, owl clover, lupines and desert chicory to bloom abundantly and blanket the desert in an explosion of color, but you can count on the steadfast perennials to bloom as usual later in the spring.