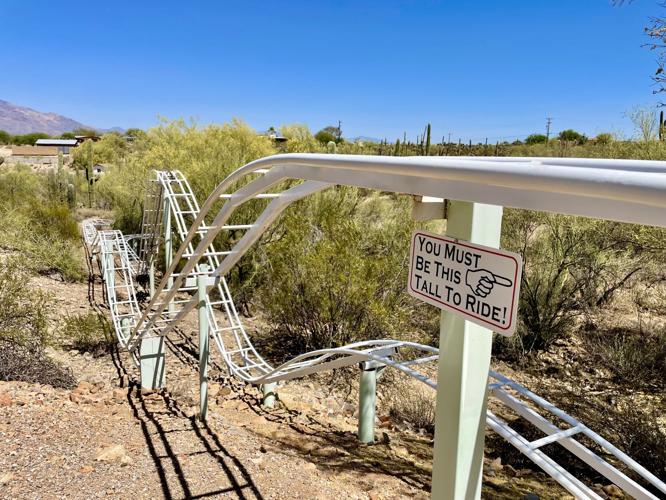 The roller coaster that Gary Dykman built five years ago for his grandchildren at his Tucson home. The coaster is dubbed "The Riley" after his first granddaughter. 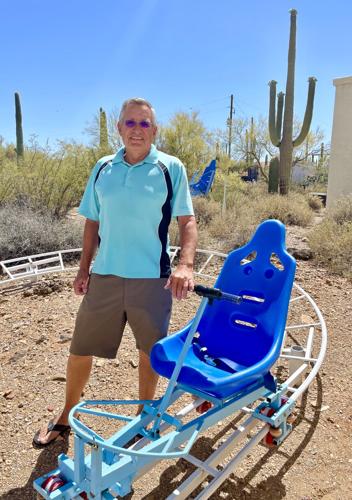 Gary Dykman, 63, poses with the roller coaster that he hand-built for his grandchildren. 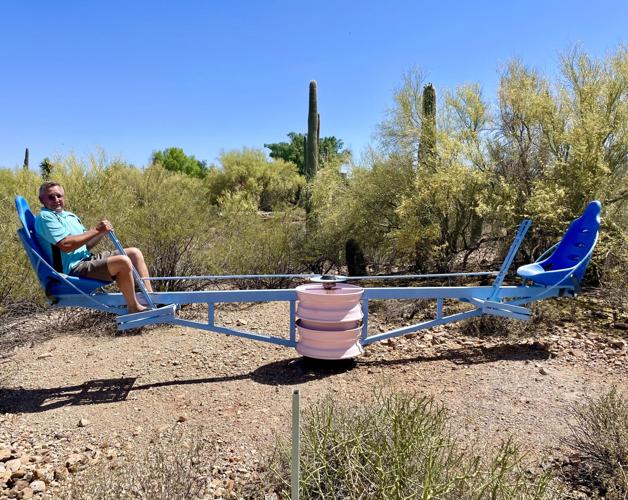 Gary Dykman takes a spin on the merry-go-round that he built for his grandchildren at his home in Tucson. 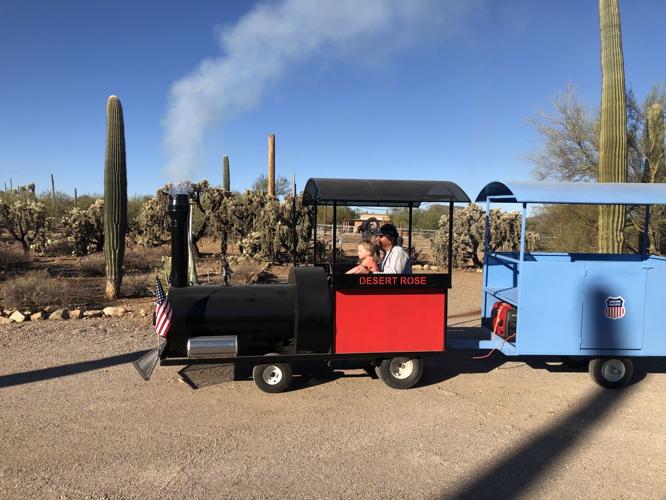 Gary Dykman and his granddaughter Kinsley take a ride on the train he built at his home in Tucson, Arizona.

At 18, he built one of the first monster trucks in Tucson, the Cyclops, that now makes its way across the country for shows and was even featured in a Super Bowl commercial, he says.

But, his “monstrous” feat isn’t what he’s known for around Tucson these days. Instead, it’s the handmade 190-foot-long steel roller coaster that sits in his yard, slightly hidden by the lush plants of the Sonoran Desert.

After posting photos of the roller coaster in the “Weird Stuff You’ll Only See in/near Tucson” group on Facebook last month, his post went viral, attracting news organizations and roller coaster enthusiasts from around the country to chat about the unique home attraction.

“I had never been on Facebook before I retired. So I saw that ‘weird things in Tucson’ (group) and thought, ‘Hey, that's right up the alley: weird,’” he says. “It is crazy how many people call and want to ride it from back east and I have people from TikTok that's ridden every roller coaster and they want to come ride it. It's crazy.”

“When I heard that I was going to be a granddaddy, I got excited and built a roller coaster,” he says. “So it was done before she was even born.”

The roller coaster is now named “The Riley” after his granddaughter.

“It was fun. I had a great time figuring out the angles and, like, the speed of the chain coming back up the car,” he says of the experience. “It's the only time I've ever used Pi in my life, to figure out how fast to come up and I was amazed I remembered it.”

The roller coaster features a bright cerulean seat from a racecar, 24 wheels from skateboards, a chain drive from a hay baler and pulleys from a chicken plucker, Dykman says.

With the roller coaster able to gain speeds up to an estimated 20 mph, the coaster’s seatbelt and handlebar ensure that riders will stay put while making the descent around a Palo Verde tree on the ride’s route.

Family and friends from the ages of 2 to 64 have taken a spin on the roller coaster.

And despite Dykman placing a sign on the coaster stating that you have to be a specific height to ride, he’ll usually place a step stool there, so even the youngest family members appear to reach the height “requirement” and can take a slow ride on the coaster.

‘I just like them to come over and see grandpa’

While Dykman may not be a Disney Imagineer, he’s using his 20 years of experience as a mechanic to create a sense of magic for his three grandkids.

“It's great to see them smile and laugh and have a good time,” he says.

For every new grandkid, he builds a new attraction on his property.

Over the last five years, he has built “The Riley” roller coaster, a merry-go-round and a small train for his three granddaughters, 5-year-old Riley, soon-to-be 4-year-old Kinsley and 3-year-old Paige. However, he had to remove the train due to the wheels having difficulty on the desert terrain.

Although the roller coaster is the flashiest of all the attractions, the kids’ favorite ride is the simplest contraption of them all: the merry-go-round, which Dykman says they can spin on for hours.

“They're talking about having a fourth one (grandkid). So hopefully, I'll get a fourth one and I'll build something else,” he says.

What could possibly top a roller coaster? Well, Dykman isn’t sure either. However, he has one idea in mind — a volcano waterfall that features red-colored water and shoots out fire, but that’s something that he would like to build at his brother’s house, he says.

Regardless of what he builds next, he always keeps the same goal in mind: finding a way to keep his grandkids coming back to grandpa’s house.

“I just like them to come over and see grandpa, you know, give them a reason to come over here and keep them here, like when my kids were growing up,” Dykman says.

We don't recommend building a roller coaster at your home unless you're experienced in the craft. Check with your city or county for permit information.

A guide on how to stay sun-safe and protect your skin from harmful UV radiation with expert advice from the senior health educator at the University of Arizona Cancer Center's Skin Cancer Institute in Tucson.

Tucson's saguaros are starting to bloom: Here's what you need to know 🌵

It's peak blooming season for saguaros right now, through June, in Tucson. Find the beautiful blossoms across the city at places like Gates Pass, Saguaro National Park East and the Douglas Spring Trail.

Searching for a summer camp? Here's a list of more than 100 of them

Summer is fast approaching. Searching for a 2022 summer camp for your child or teen? Check out our #ThisIsTucson Summer Camp Guide for more than 100 camps, mostly in the Tucson area!