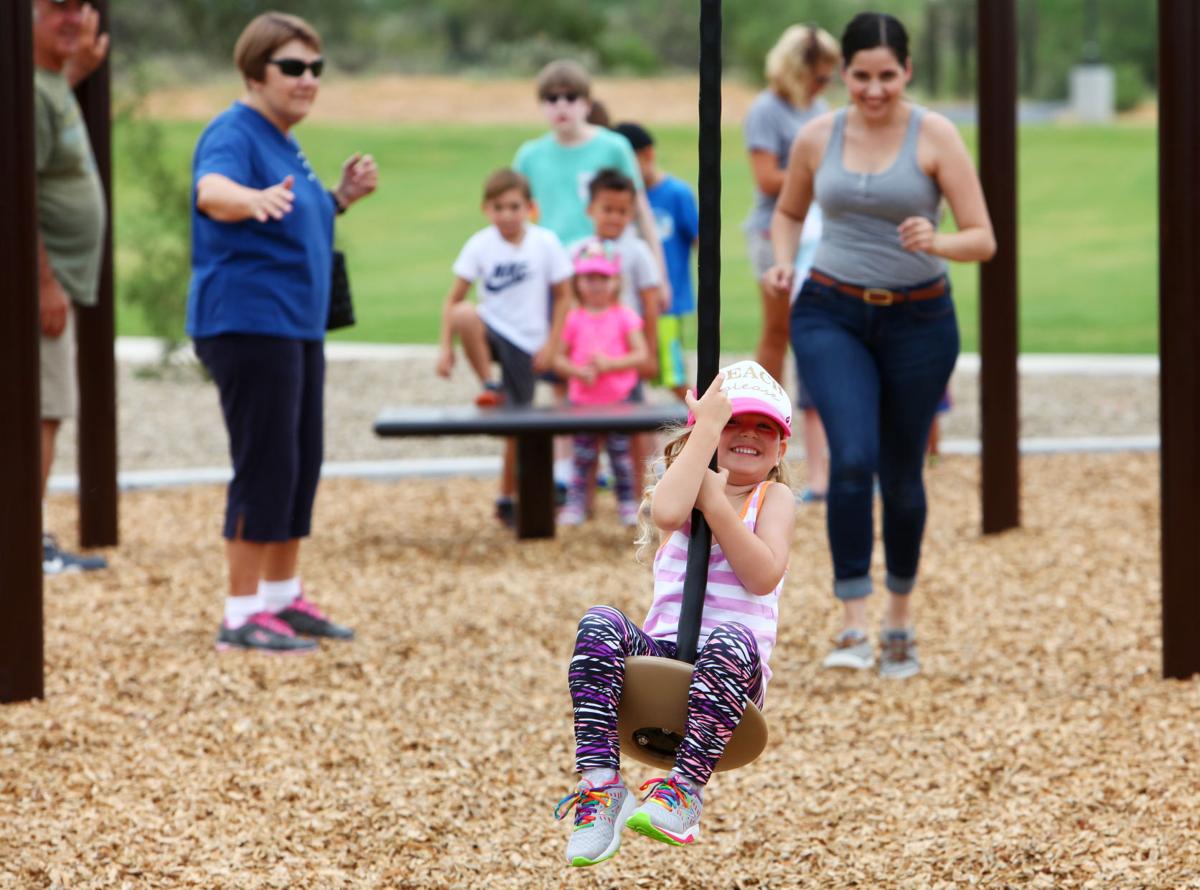 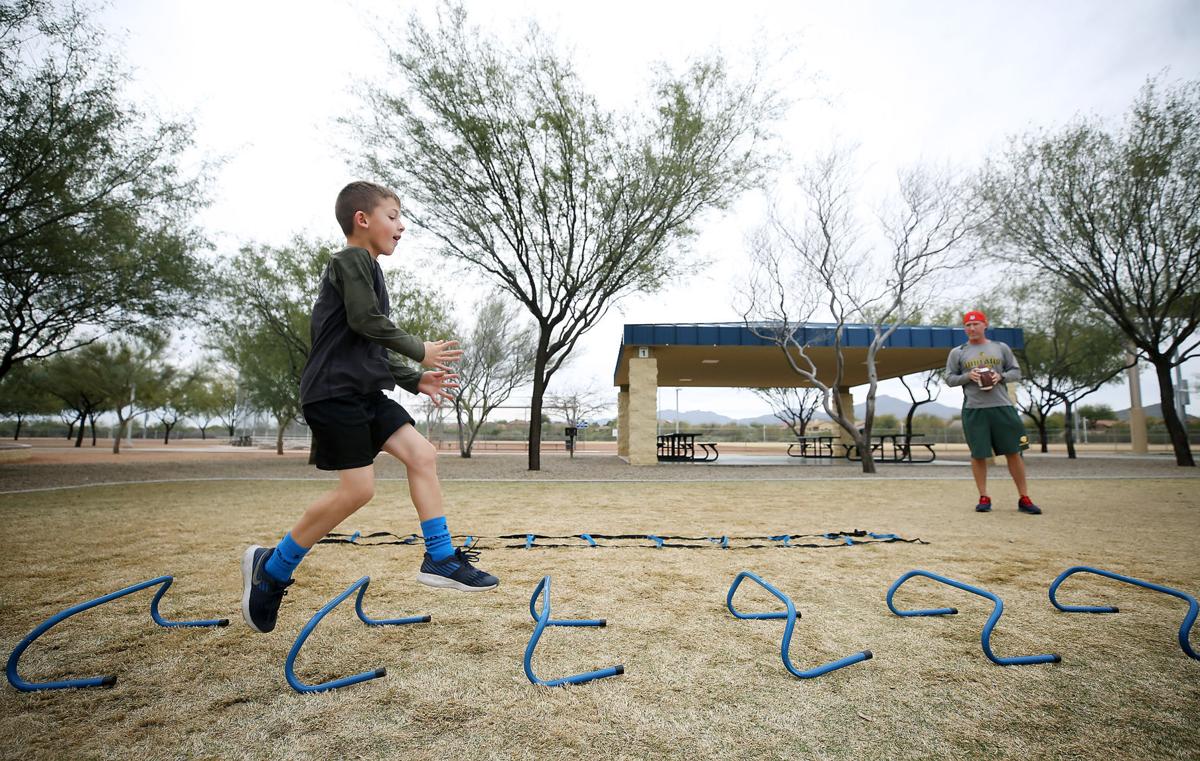 Jackson Richardson, 7, goes through an agility drill under the watchful eye of his dad, Jason, at Crossroads at Silverbell District Park, 7548 N. Silverbell Road. The park is in Marana, which is taking suggestions from residents about what they’d like to see in the town’s parks by 2030. A similar but separate effort is taking place in neighboring Oro Valley. Both communities are northwest of Tucson. 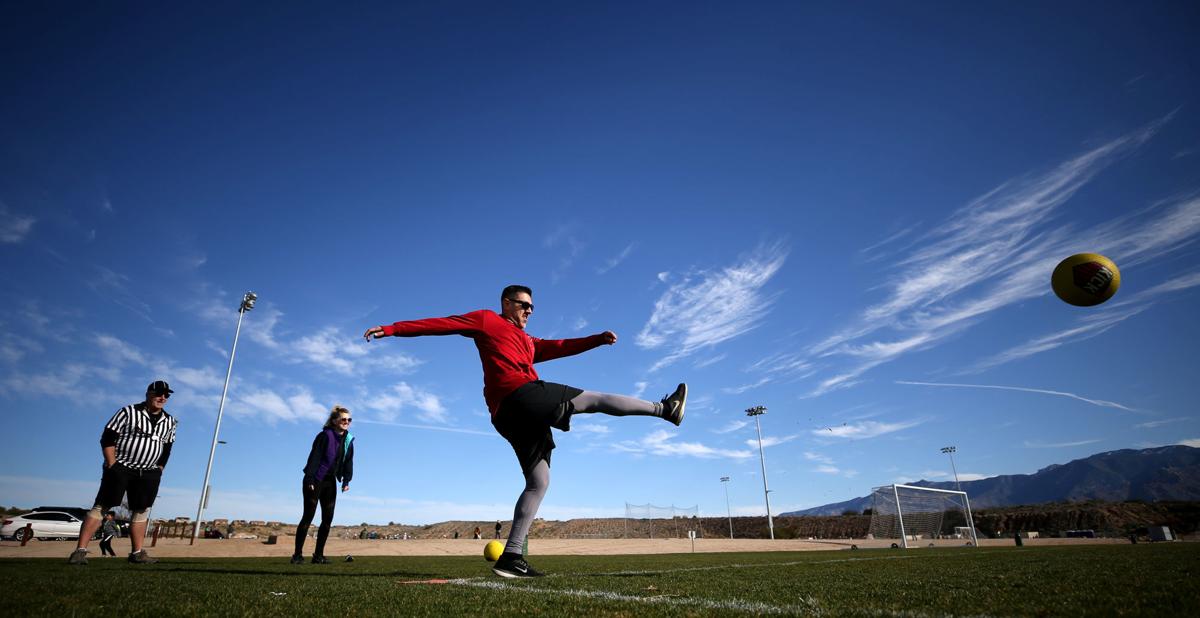 Jose Campa drills a shot to the outfield. He was one of the more than 20 players that turned out for the first Beyond Tucson Kickball Tournament sponsored by the Oro Valley Parks and Recreation Department. The tournament was held earlier this month at Naranja Park.

If you live in Oro Valley or Marana, you have the chance to share your thoughts about what kinds of recreation programs and facilities you'd like to see developed in the communities in the next ten years.

Both towns, which have seen large population growth, have recently launched similar yet separate efforts to solicit input on everything from recreation programs, trailheads and sport courts. They'll take that feedback and compile it into plans that will be presented to the separate town councils later this year.

For Marana, which has added more than 30,000 people since 2000, parks and recreation department representatives have been meeting with residents, either through public presentations or via booths at major parks events, like soccer tournaments.

Marana residents can also share their thoughts through this survey.

Responses so far have lined up with national trends regarding public parks, including the demand for dog parks and pickleball, says Jim Conroy Marana’s parks and recreations director.

“We have such a balance of demographics, as far as people raising their families to people retiring to Marana and everything in between, that we’re really looking at everything across the board, from youth programs to senior programs to aquatic facilities to recreation centers,” he said.

Marana is going to take that feedback and work with an 18-member advisory committee before submitting its report to the mayor and council for review and discussion, hopefully in May, Conroy said.

While there is no cost estimate yet for future projects, Conroy said they’ll be done based on "prioritization."

Oro Valley parks director Kristy Diaz-Trahan said the goal is "to create a doable and implementable plan." They’ll do so by compiling the more than 700 responses they’ve already received into a survey; the responses from that survey will be compiled into a comprehensive master plan that is expected to be completed in the spring.

It’ll also include questions about preferred funding methods — a necessity after voters turned down a $17 million bond in 2017 for one park.

So far, she said, the feedback Oro Valley has received has ranged from "anything and everything recreation you can think of." That includes requests for a dirt trail pump track, a skateboard park and an indoor basketball court, Diaz-Trahan said.

They’re also asking for input regarding the future of the town's community center as improvements to the center were a piece of the Town Council's decision to keep its golf courses open.

She emphasized that the feedback is important and that some people don't necessarily want a community center "that’s glitzy and brand new."

"The best community center and the best park and the best trails are the ones that are being used," she said.

How to submit your ideas online

If you live in Marana: Go here

If you live in Oro Valley: Go here

This story was created by #ThisIsTucson and underwritten by Children's Museum Tucson, hostin…

Teens can apply for summer jobs through this Pima County program

Working from home in your PJs everyday sounds like a dream, but sometimes, you just have to …

A helpful hiker's guide to Painted Hills Trail, the perfect nature break on a busy day

Another adventure into our beautiful desert.

This new library program will help you and your child prepare for kindergarten ... for free!

The library wants to help you and your kiddo get ready for kindergarten.

Rebel flag will no longer fly in Tucson's rodeo parade

The “Stars and Bars” flag, which flew over Tucson during a nearly 300-day Confederate occupation in 1862, will continue to be allowed.

Justin, a two-time University of Arizona graduate, covers local government, focusing on the City of Tucson. He previously worked at the Louisville Courier Journal, Arizona Republic and Hartford Courant and has received several journalism awards.