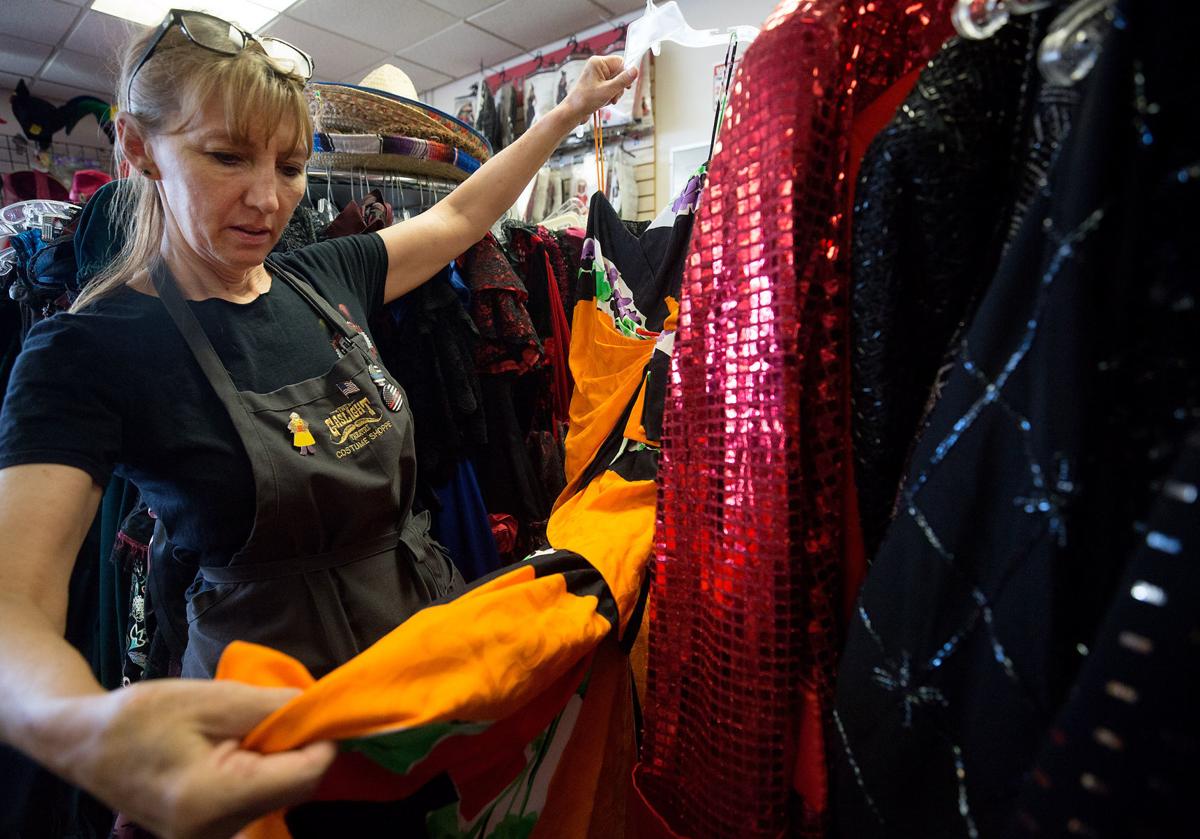 Gaslight Theatre’s founder, Tony Terry, says Renée Cloutier’s dedication to costuming makes his job running the theater easier. “Nobody has to tell her ‘Hey, I want you to do a great job,’” Terry says. “She’s an absolute gem and I don’t know how other theaters get by without Renée doing their costumes.” 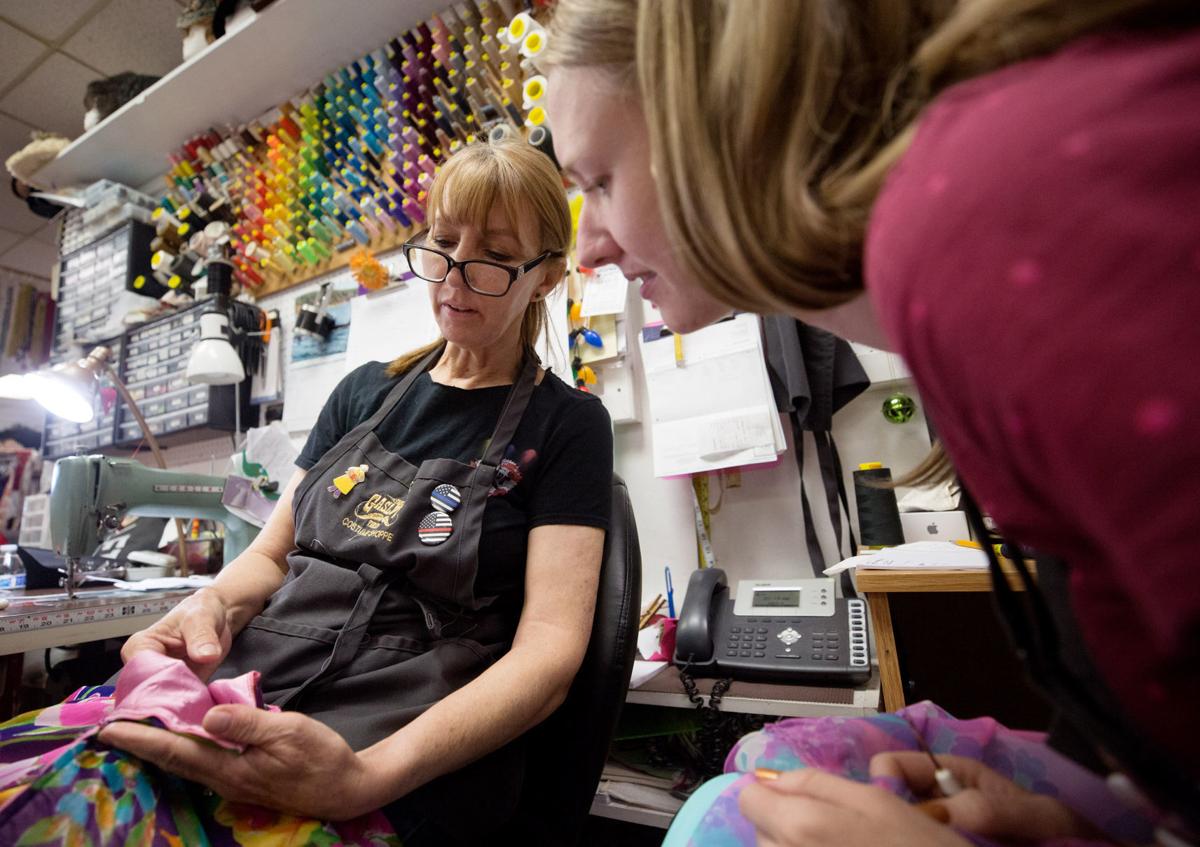 Renée Cloutier, Gaslight Theatre’s head costume designer, first created the theater’s costumes from home in the early 1980s. In 2001, she joined Gaslight full time. Since then, every article of clothing seen on stage, from cowboy vests to spy suits, has been sewn, altered, designed or repurposed by Cloutier and her team of half a dozen costumers. 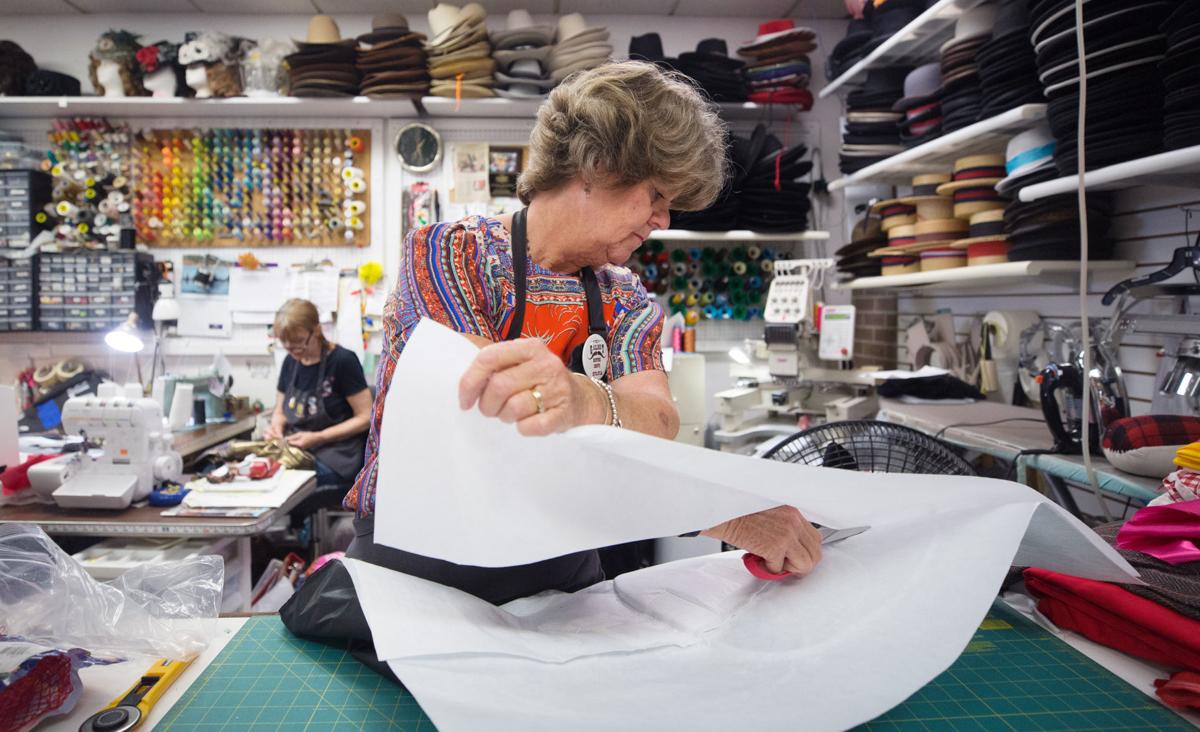 Sylvia Hamilton, costume designer, recalled one time an actress used a poofy skirt to shield an actor’s lower-half after he finished his musical number with pants that had split. 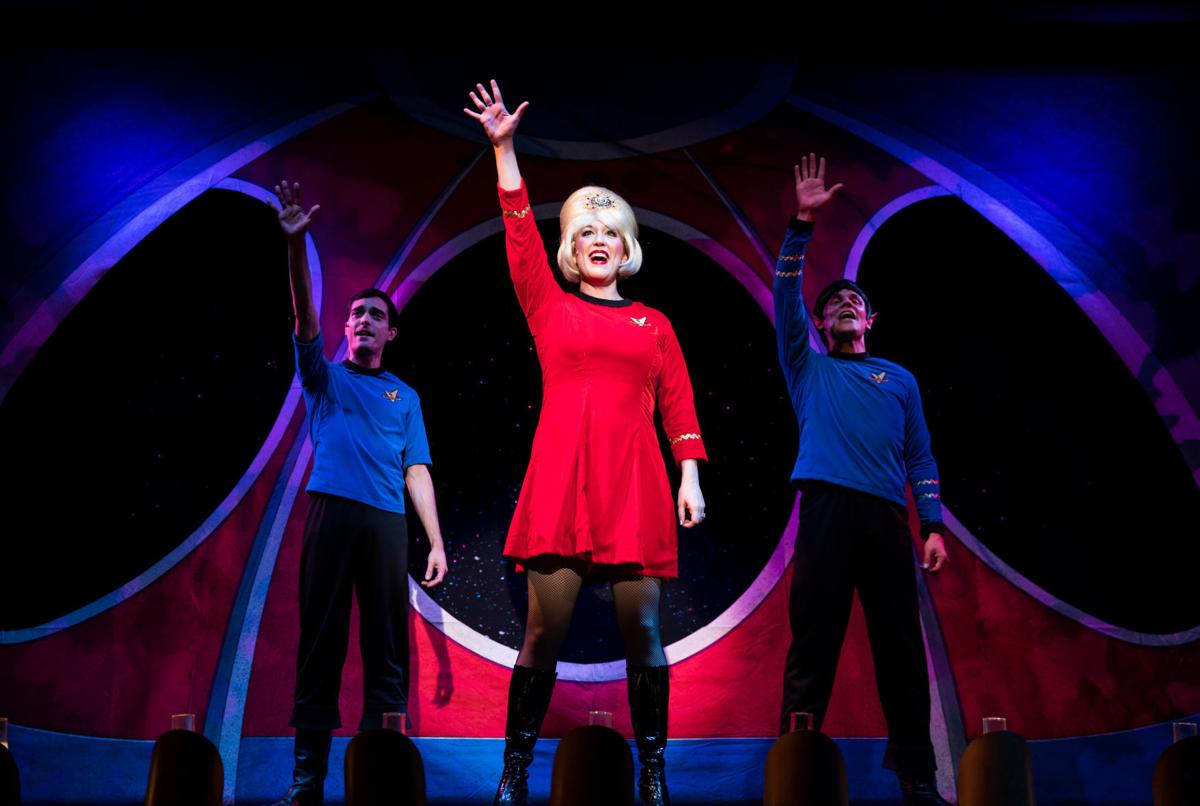 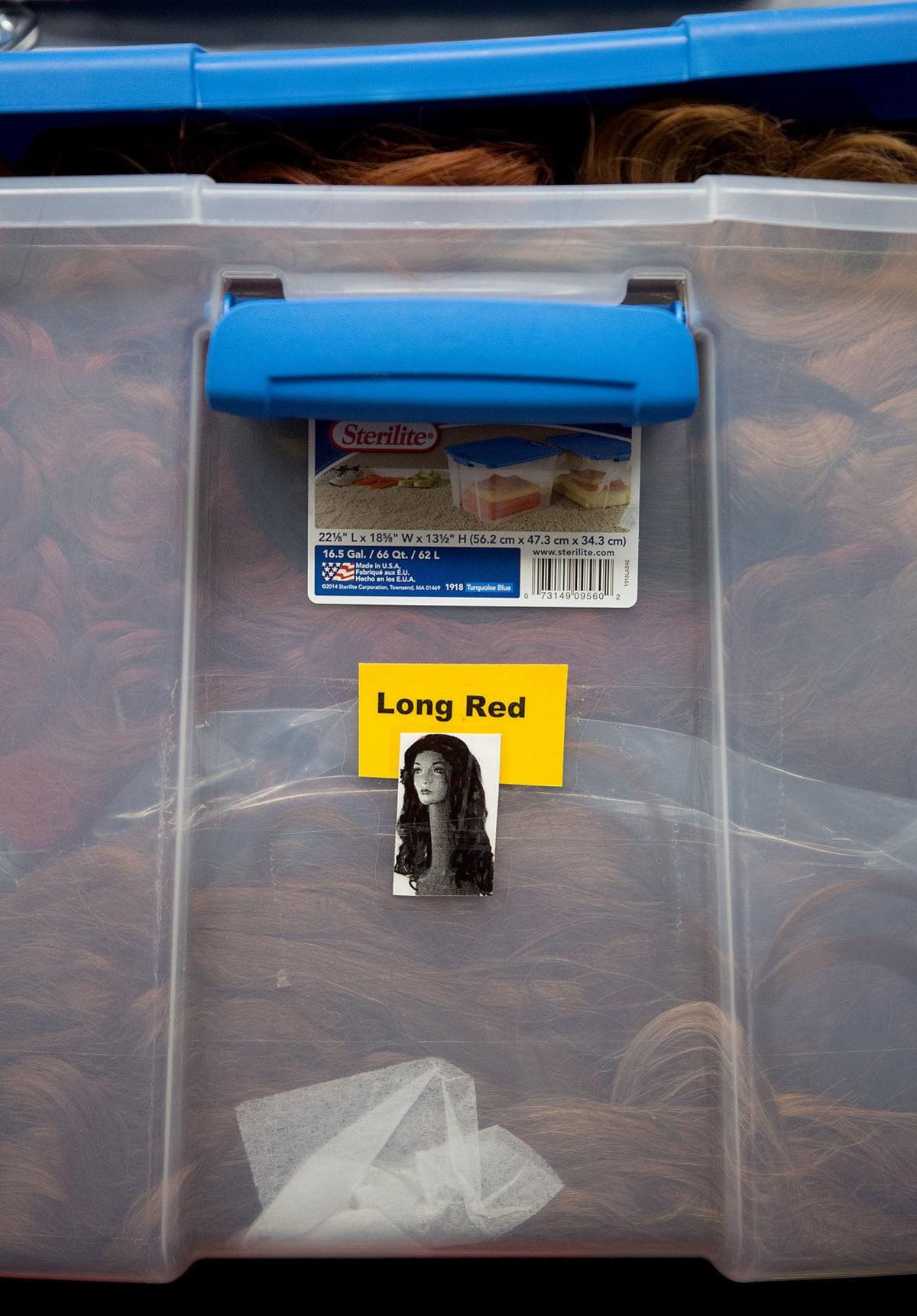 The Gaslight Costume Shoppe, 7004 E Broadway Blvd, on is filled with bins for wigs, jewelry and other items on July 15, 2019. 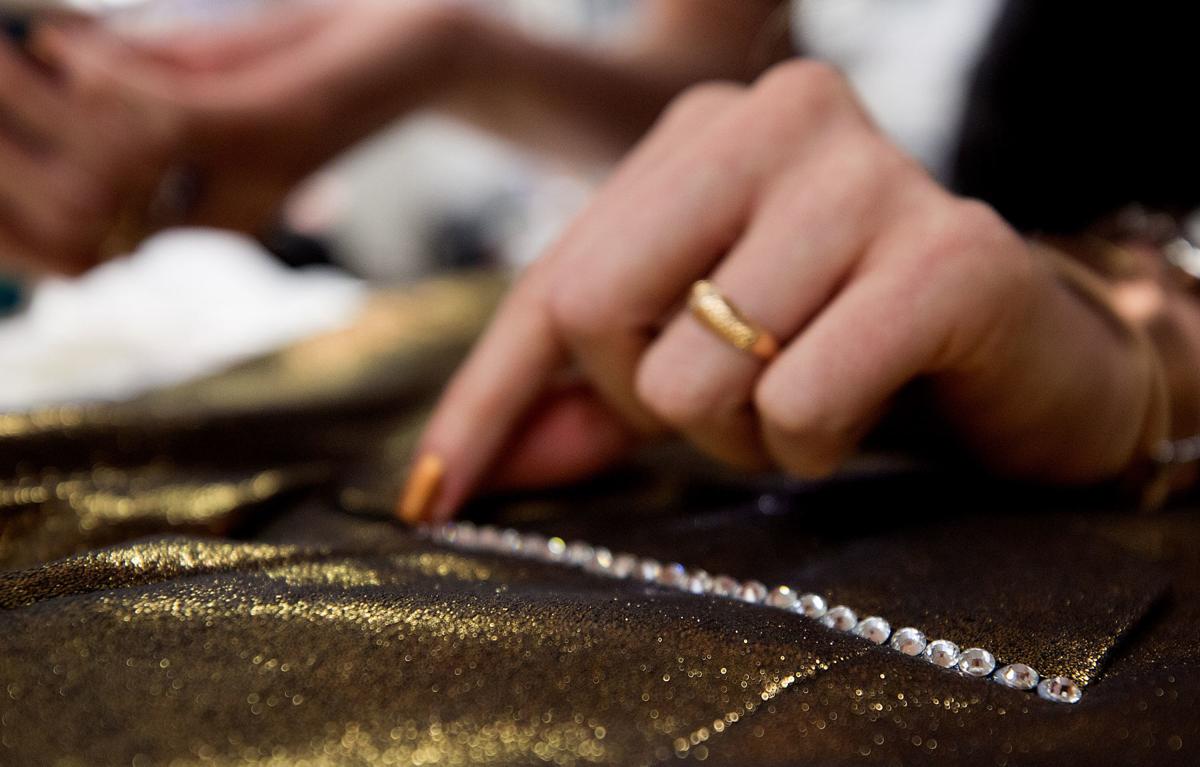 Amy Gurr adds rhinestones to a jacket while working at the Gaslight Costume Shoppe, 7004 E Broadway Blvd, on July 15, 2019.

And a space princess determined to have intergalactic peace.

These colorful characters brought to life on the Gaslight Theatre’s stage all have something in common — what they wear — the electrifying white wig, eye patches and sparkly teal dress with a crown to match — all come from Tucson’s own Gaslight Costume Shoppe.

In 2001, she joined Gaslight full time. Since then, every article of clothing seen on stage, from cowboy vests to spy suits, has been sewn, altered, designed or repurposed by Cloutier and her team of half a dozen costumers.

"Nobody has to tell her 'Hey, I want you to do a great job.' She just does her best job every time," Terry says. "She’s an absolute gem and I don’t know how other theaters get by without Renée doing their costumes."

The job has grown since Cloutier first started. Gaslight has long mounted five shows a year, but the casts have gotten bigger and bigger.

"There used to be one cast. But now, every show is at least double-cast and some characters have three people playing them," she says as she runs a swatch of red micro velvet for an Elvis costume under the needle of a sewing machine.

But Cloutier also has an eye for small details.

The golden badges worn by the crew of the spaceship Excelsior in "Space Trek" look nearly identical to the ones seen on "Star Trek," which the play spoofs. But a closer look reveals two small symbols in the middle of the badges, which only devoted "Trekkies" might catch.

"These two lines are Romulan letters that spell ‘GT’ for Gaslight Theatre. No one’s gotten it yet but it’s our little Easter egg," Cloutier says.

Not all Gaslight shows are parodies of well-known works, but the ones that are come with an added obligation to stay true to the original.

"With characters like the ones in ‘Star Trek,’ you got to do it right. You can’t really mess that up or people won’t like it," Cloutier says.

Cloutier says each show takes about a month to prepare costumes, and they make adjustments right up until the curtain rises on opening night. Just in case, the designers are on standby the first few performances to work out any kinks.

"There’s always someone backstage for the dress rehearsals and previews as well. After that, the actors are pretty comfortable with what they’re doing and help each other out with costumes," she says.

That’s not to say that the Gaslight performers are immune to wardrobe malfunctions, which can add an extra dose of humor to the shows.

"One actor bent down and his pants split from knee to knee during a show. It was wild — the funniest thing ever," said costumer Sylvia Hamilton, sitting across from Cloutier, a whirring sewing machine between them.

Hamilton recalled that actress Heather Stricker used her poofy skirt to shield the actor’s lower-half as he finished his musical number.

After all, the show must go on.

Once a production ends, the costumes are kept on-site at the costume shop to be reused or repurposed for a different production.

Piles of assorted hats line the walls and there is a vault filled with wigs of every color and length imaginable.

The vault did not always hold beehives and bob cuts. It was once part of the Valley National Bank, which stood where the costume shop now does.

In addition to two shipping containers behind the shop, the former bank’s drive-thru is now a storage area packed wall to wall with costumes, organized in massive rows by style and time period, from cavemen garb to disco get-ups.

Hundreds of the costumes find their way to the Gaslight Costume Shoppe, near Broadway and Kolb, where they can be rented or purchased. The shop doesn’t have many walk-in customers during the summer browsing, but the sewing and embroidery machines still work at full speed throughout the week.

Cloutier and her team supply costumes for not only Gaslight’s main stage shows but for the Gaslight Music Hall and other theaters. Theater on the Move, Arts Express, the Arizona Repertory Theatre, and even Eastern Arizona College’s theater department have made use of the team’s expertise.

While "Space Trek" is in full flight (it closes Aug. 25), the ladies of the Gaslight Costume Shoppe are working feverishly on "009: License to Thrill," a spoof of the James Bond universe which opens August 29.

"There’s really no downtime, even in the summer," Cloutier says.

Note: The article was originally published by the Arizona Daily Star on Aug. 9, 2019.

On the boards for The Gaslight

Gaslight costumes by the numbers

17 — new costumes built from scratch for The Gaslight’s current production.

1000 — yards of thread in each spool the costume shop orders

1,400 — the number of rhinestones in the costume shop’s Elvis shawl jacket. Each glued and placed by hand.