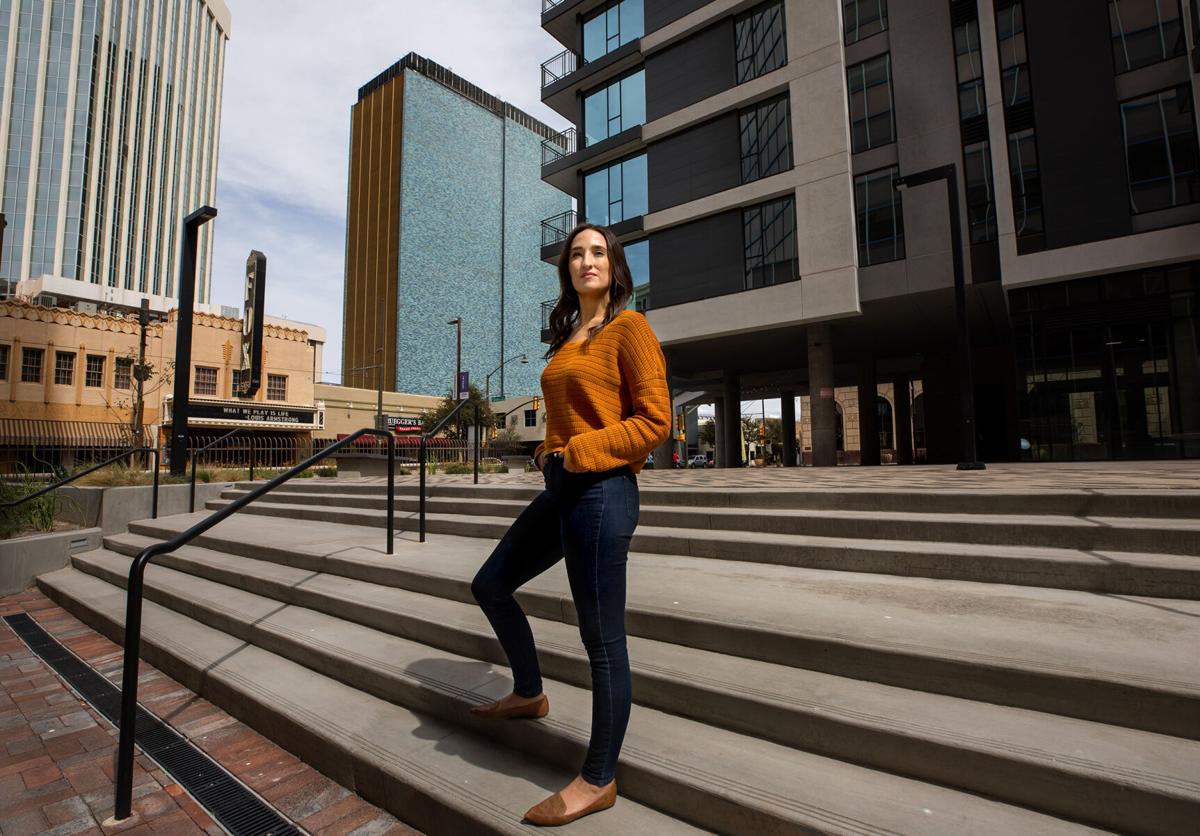 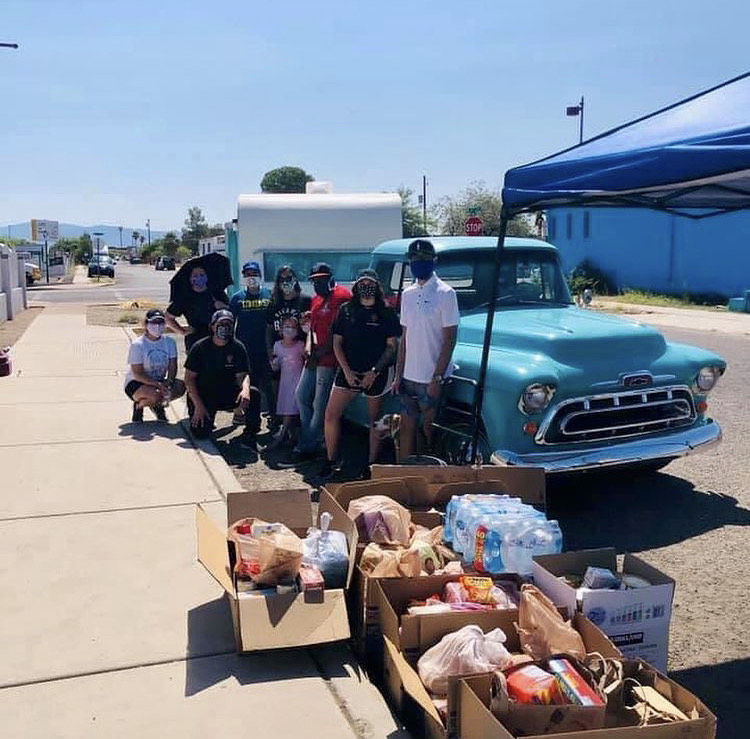 Desiree Guerrero started South Tucson Community Outreach and has since received help from volunteers and other organizations in the Tucson area. 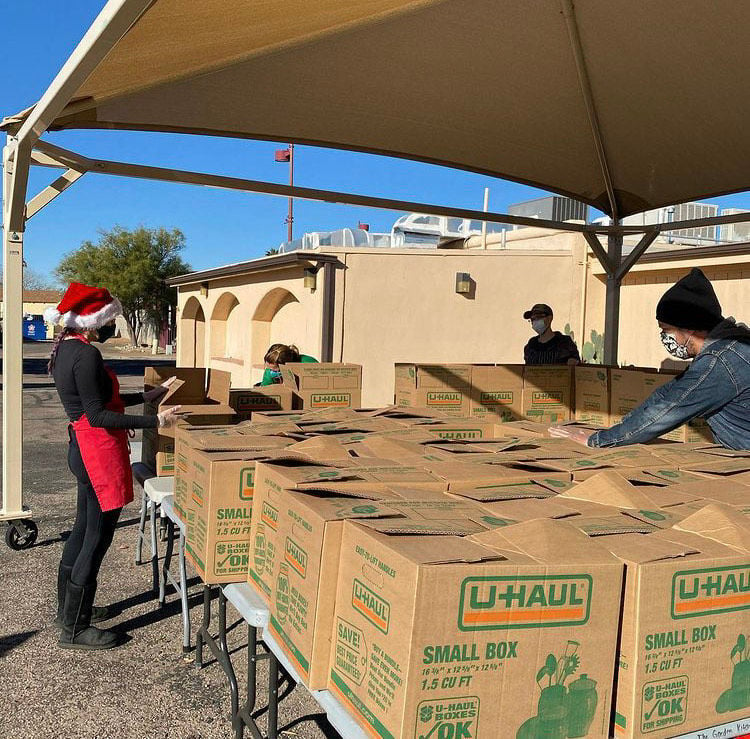 Fifty food boxes were delivered to families around Christmastime. 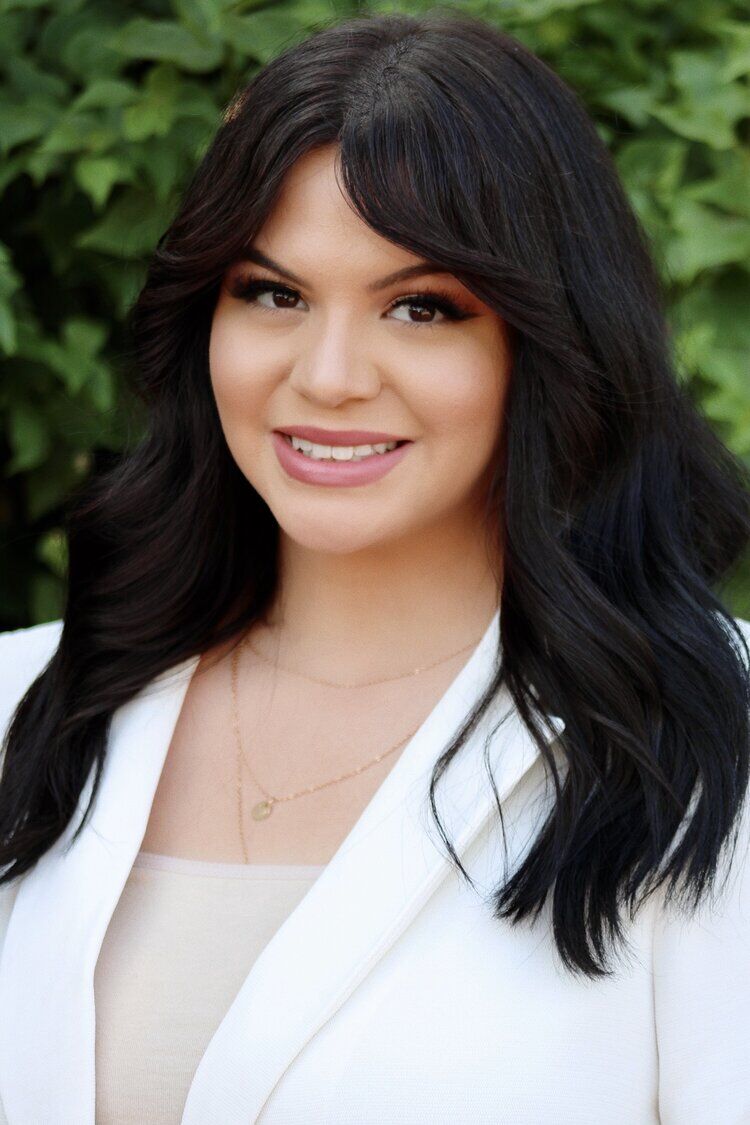 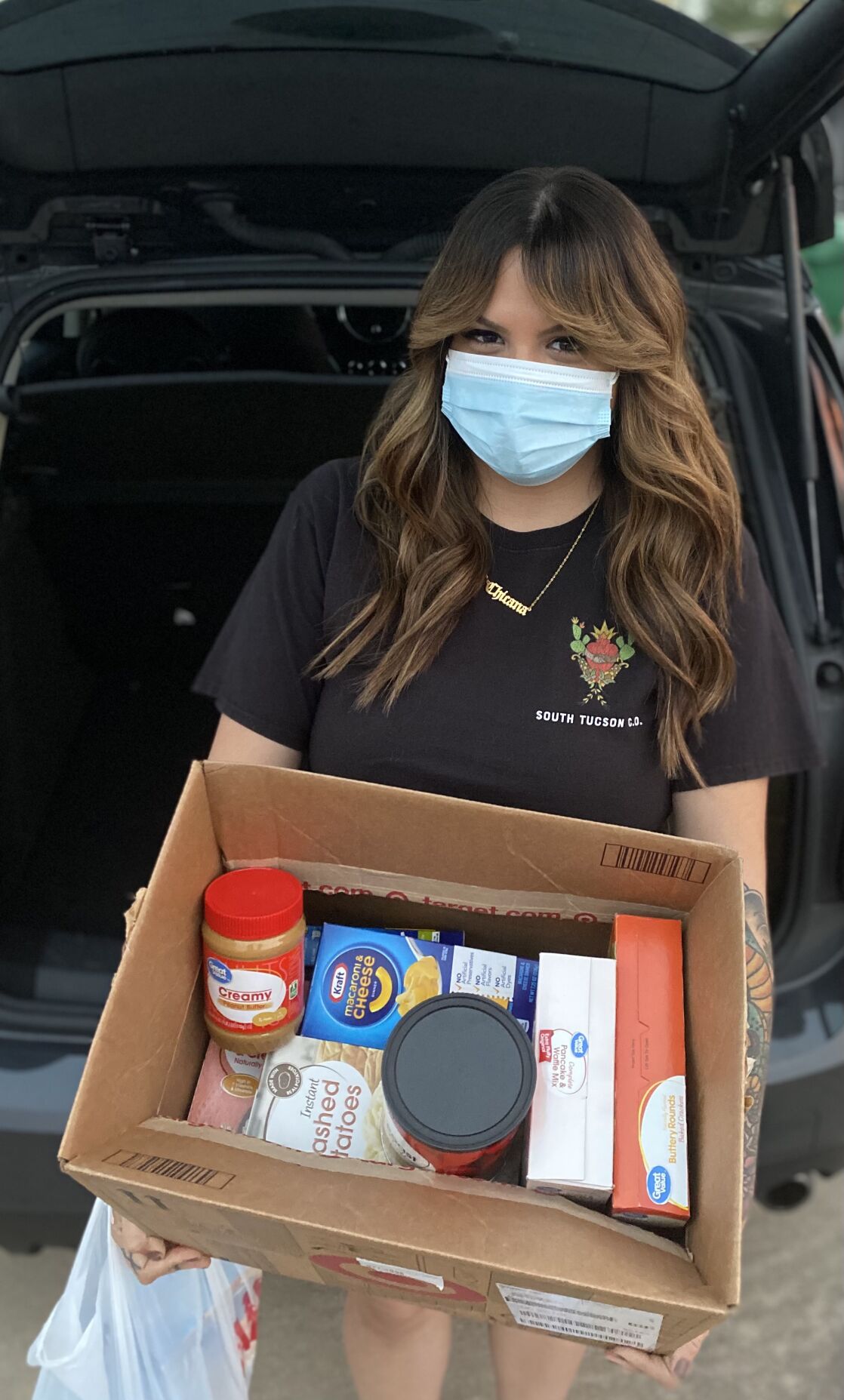 Desiree Guerrero says she loves "seeing the community come together and help each other out."

Fifty food boxes were delivered to families around Christmastime.

After losing her job before the pandemic hit and having some extra time during quarantine, Desiree Guerrero decided to do something to help those in need.

“I’ve been wanting to do something like this for a few years now, but I never knew where to start and I was kind of having a tough time comparing myself to other organizations who were doing so many great things,” she says. “Last year, right when things started shutting down because of the pandemic, it lit the fire under me to start doing something.”

Guerrero is one of many women in Tucson who have donated time and resources to help the community during the COVID-19 pandemic.

What started as buying groceries for a few neighbors turned into an organization — South Tucson Community Outreach — that prepares and delivers one-time emergency food boxes for residents in certain areas of Tucson’s south side.

“The south-side area we wanted to focus on was an area I’m familiar with and an area with greater need — where I saw people needed help,” Guerrero says, adding that she hopes to expand the delivery region this year.

South Tucson Community Outreach started with just Guerrero — buying groceries out of her own pocket and delivering boxes herself.

The program has since received help from volunteers and local organizations such as Galeria Mitotera. One event, a food drive in August, was so successful it helped South Tucson Community Outreach stock up on food that lasted through the end of the year.

Luckily, Guerrero was able to find a job at a law firm soon after losing her previous job.

“I was juggling — and still am — but it was hard in the beginning to manage a full-time job and this, which felt full time,” she says. “It’s been a little bit easier now that I have a lot more people to help out, which I’m so thankful and grateful for. And I’m happy people want to help out and have the same idea as me.”

“I love seeing the community come together and help each other out,” she says. “I started doing it myself but I would not have been able to continue and be where I am now without the community support.”

Guerrero has received support from other women throughout the community — from women giving her advice on mutual aid, to women leading local organizations, to a woman who made tamales for food boxes given out around Christmas.

One of Guerrero’s biggest inspirations has been Jennifer Parlin of the University of Arizona Garden Kitchen, who has helped South Tucson Community Outreach store food, apply for grants and get the word out to volunteers.

“Women are ... hustling through this pandemic”

The Sunnyside Foundation is among many Southern Arizona organizations that has provided support to those who need it most.

Since June, the Sunnyside Foundation, with help from United Way of Tucson and Southern Arizona, small businesses and individual donors, was able to provide about $65,000 to families through an emergency relief fund.

“The emergency relief fund was started because we needed a faster, quicker way to help families than what traditional systems were providing,” says foundation executive director Kerri Lopez-Howell. “We wanted a more equitable way to access relief” — one that helped families before they were in crisis.

With partnerships that include Pima County, the Community Food Bank of Southern Arizona, Cox Communications and Raytheon, the Sunnyside Foundation’s initiatives over the last year have also included food drives, help for almost 2,000 people through the We Are One/Somos Uno Immigrant Relief Fund, WiFi devices to cover Summit View Elementary School, and hundreds of internet-related scholarships awarded to teachers.

“I think I get caught up in what else could be done and if I can turn that part of my brain off — the feeling like I wish I could’ve helped more. There’s always that little bit of pressure I feel but it feels really humbling for me (to help the community),” Lopez-Howell says. "It feels really humbling to be part of the community in this way — to have the trust of collaborators and teachers. It’s like when someone lets you hold a newborn baby and you’re excited but you’re scared — that’s how I feel.”

“It’s easy to say it feels good (to help), but sometimes it’s frustrating we even have to do this.”

But the biggest thing is collaboration, Lopez-Howell says. And much of that collaboration has been with women.

“Women are just incredible creatures who find a way to get it done,” Lopez-Howell says. “The team that helped me build the emergency relief fund — it was three women at the district and they all were navigating COVID like the rest of us. Kids at home, family members getting sick — 2020 was so rough on everybody mentally.”

But despite personal struggles, women in the community came together to help.

“It was nobody’s job,” Lopez-Howell says. “But no one stopped to say, ‘This isn’t my responsibility.’”

“Women are everywhere and they’re hustling through this pandemic.”

Yet another example of a woman helping the community through the struggles of the pandemic is Grace Beltran, a long-time resident of South Tucson.

Beltran has helped eight people — most of whom are her neighbors — get scheduled for a coronavirus vaccine. She was motivated to help after learning about her mom’s struggle to register for an appointment.

“My mom doesn’t have WiFi, she doesn’t have any technology, and so she was worried about how she was going to get the vaccine,” Beltran says.

After waiting for more than an hour to get through Pima County’s hotline, Beltran said her mother became discouraged and hung up.

“I said ‘Mom, you should have told me, I would have done it for you,’” she says. “So I immediately got my laptop and I registered her and then I started thinking, if she’s struggling there’s a lot more people just in my barrio and then I zoomed out and thought there’s more people probably in the city of South Tucson.”

Beltran set up email accounts for those who didn’t have them and because of her trusted relationships with her neighbors they allowed her to monitor the account for any changes to their appointments or important updates.

She also prints out the appointment confirmations and delivers them to her neighbors, keeping her own copy in case someone loses theirs and has helped neighbors connect with transportation if they need it.

Throughout the pandemic Beltran has sewn hundreds of masks, selling them for just a few dollars so the essential workers in her community can purchase enough for the work week, and she's donated several to three schools in or near South Tucson for students who need them.

She says her grandmother, Dolores, instilled in her the importance of serving her community.

"She was very Christian and she always said just like Jesus helped people, that's what we're called to do, and when you give to the community the community will give back to you," she says.

At Glow Wigs in northwest Tucson, half the clients are cancer patients and the other half visit due to various hair loss causes. Marcy Poreda, who started the Arizona shop, says starting Glow Wigs was "part of my destiny."

Whether studying, working or helping others, Yakeleen and Azul, students from Pueblo High and Tuson High, have become role models for Latina women. They are the present and the future.

Alicia de Alba has devoted countless hours to booking appointments for people struggling to find an appointment and posting information on social media to help people get their COVID-19 vaccine around Tucson, Arizona.

AZ Gives Day, on Tuesday, April 6, is an effort dedicated to supporting nonprofits. It was created by the Alliance of Arizona Nonprofits and Arizona Grantmakers Forum.