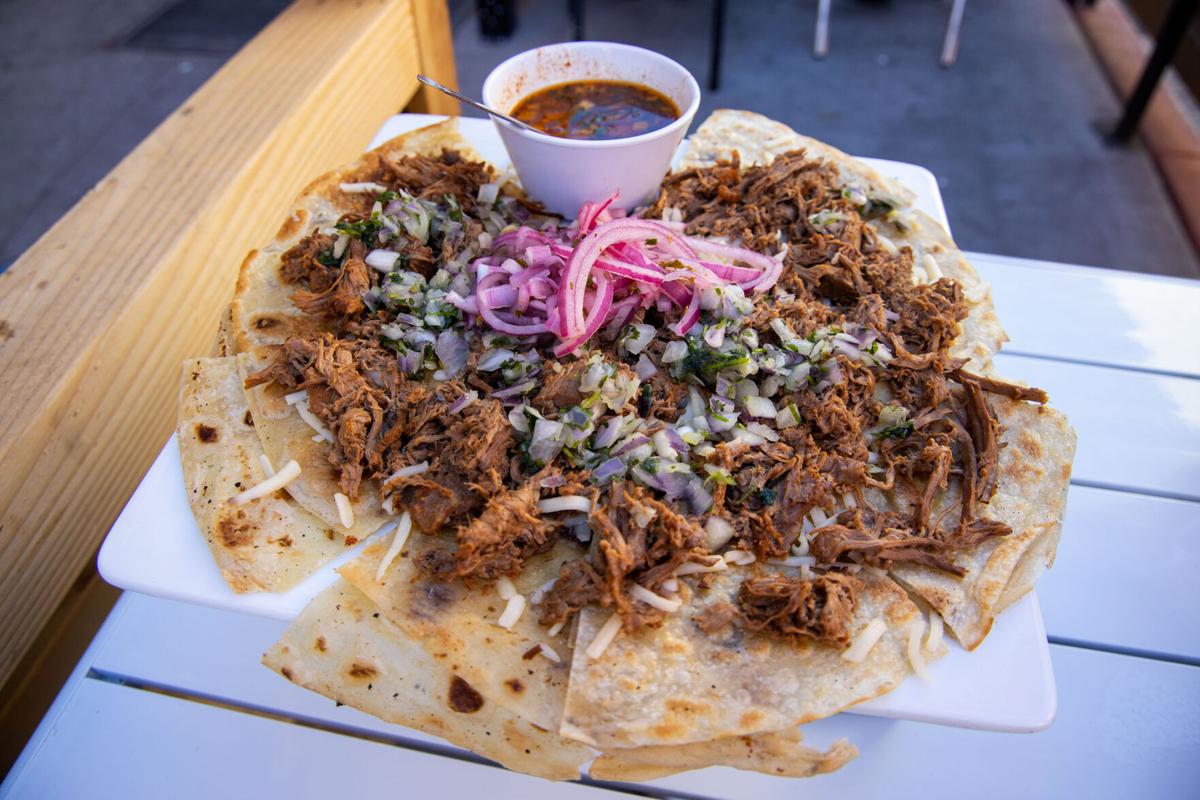 The quesabirria pizza, $14.50, at La Chingada downtown is a flurry of shredded beef with pickled red onions and pico. 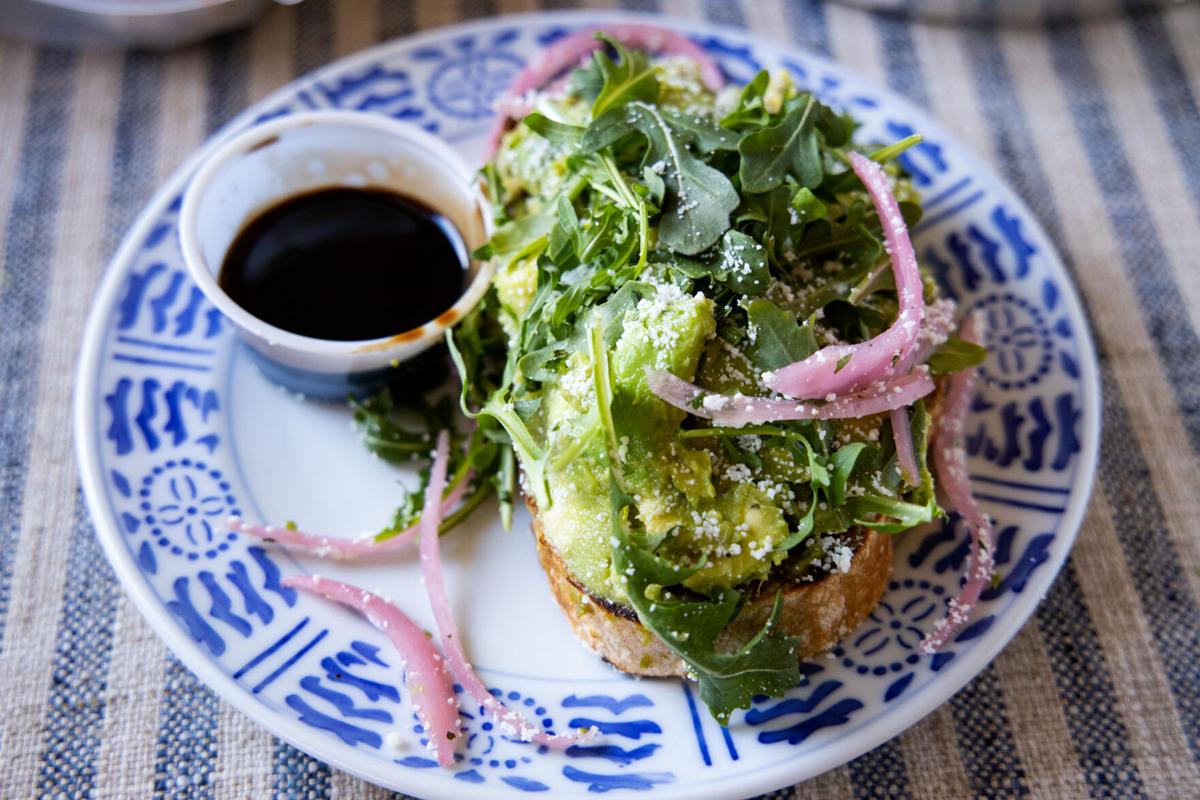 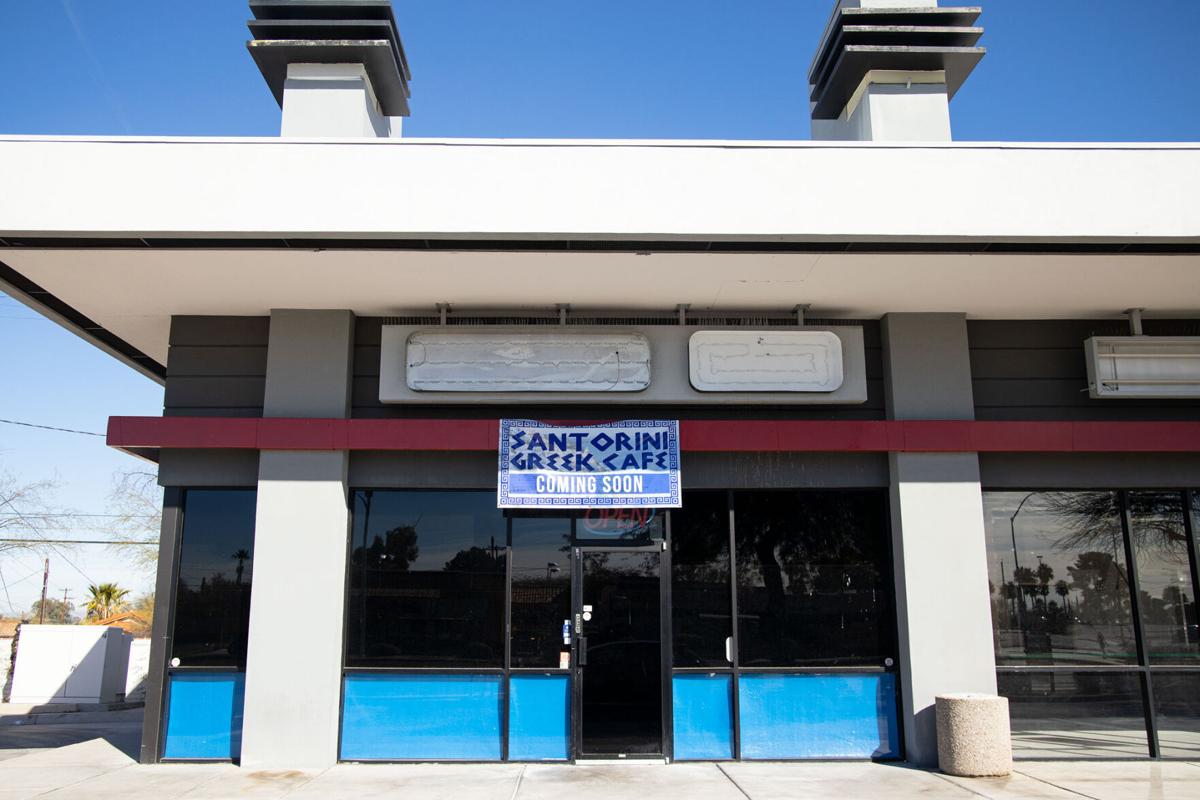 Santorini Greek Cafe is going into the Speedway spot that held fish and chips restaurants like Crispy's and Battered Up. 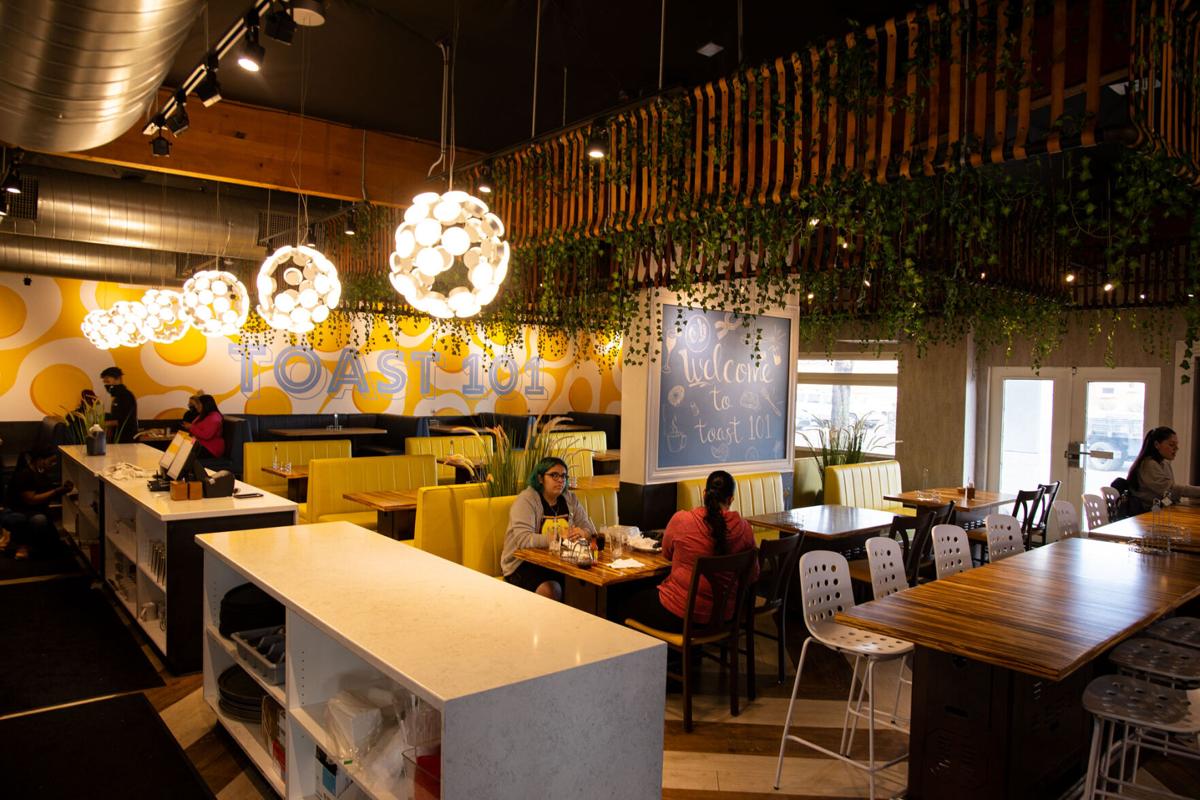 The tabletop grills have been covered up, and Toast 101 is now a breakfast restaurant. 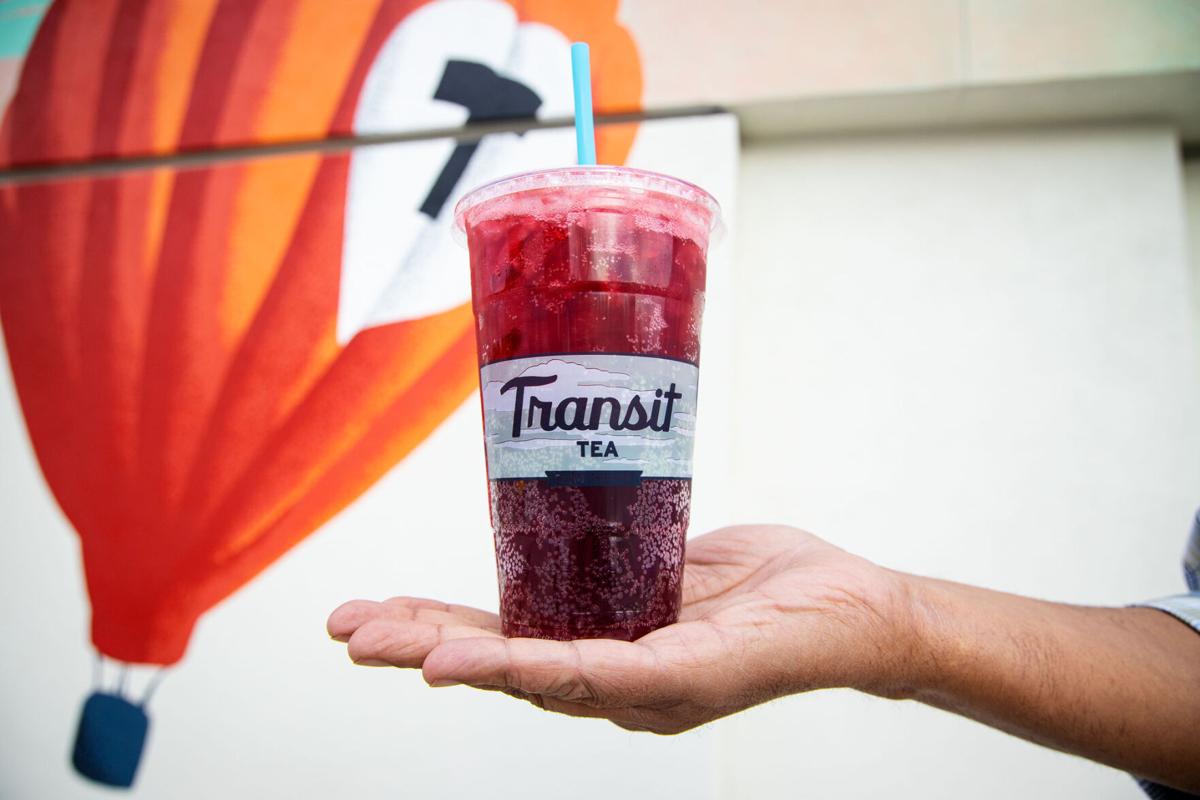 The Joyride at Transit Tea, $5.25 for a large, was fruity and light with white peach and cranberry syrup. 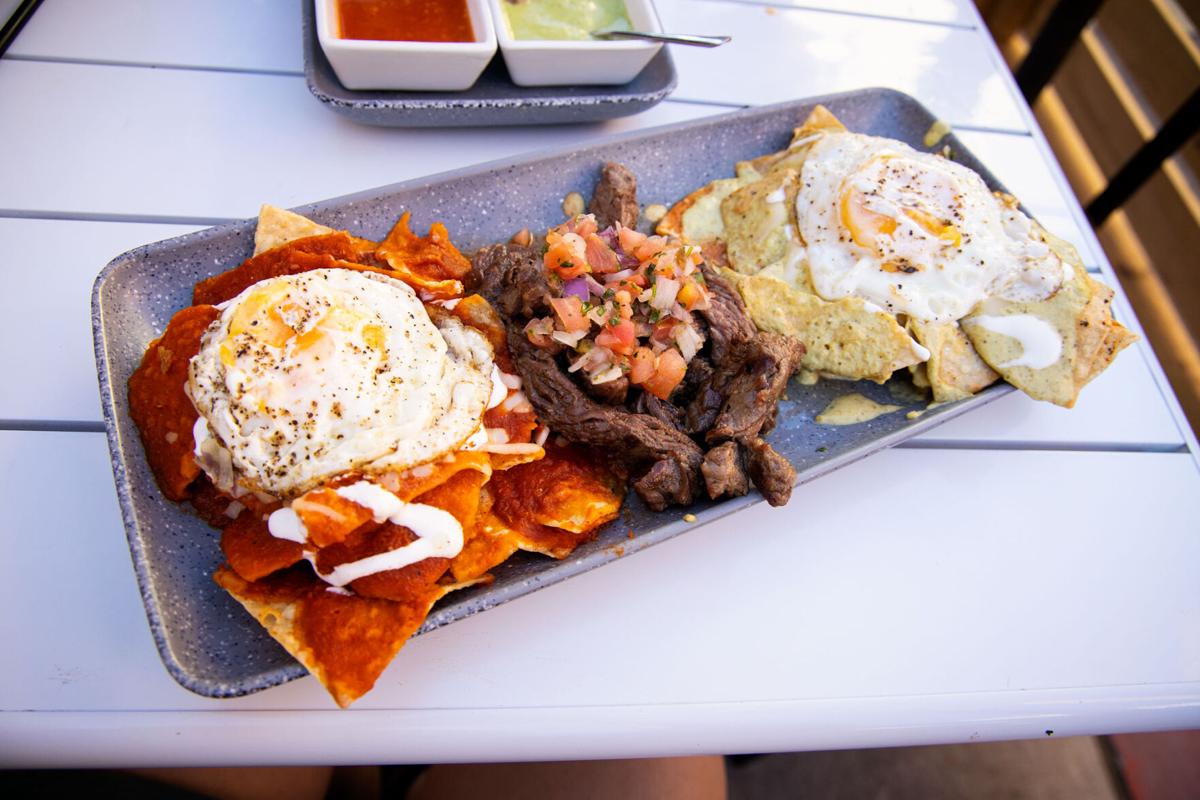 The chilaquiles divorciados with ribeye steak, $19, come with your choice of eggs at La Chingada. 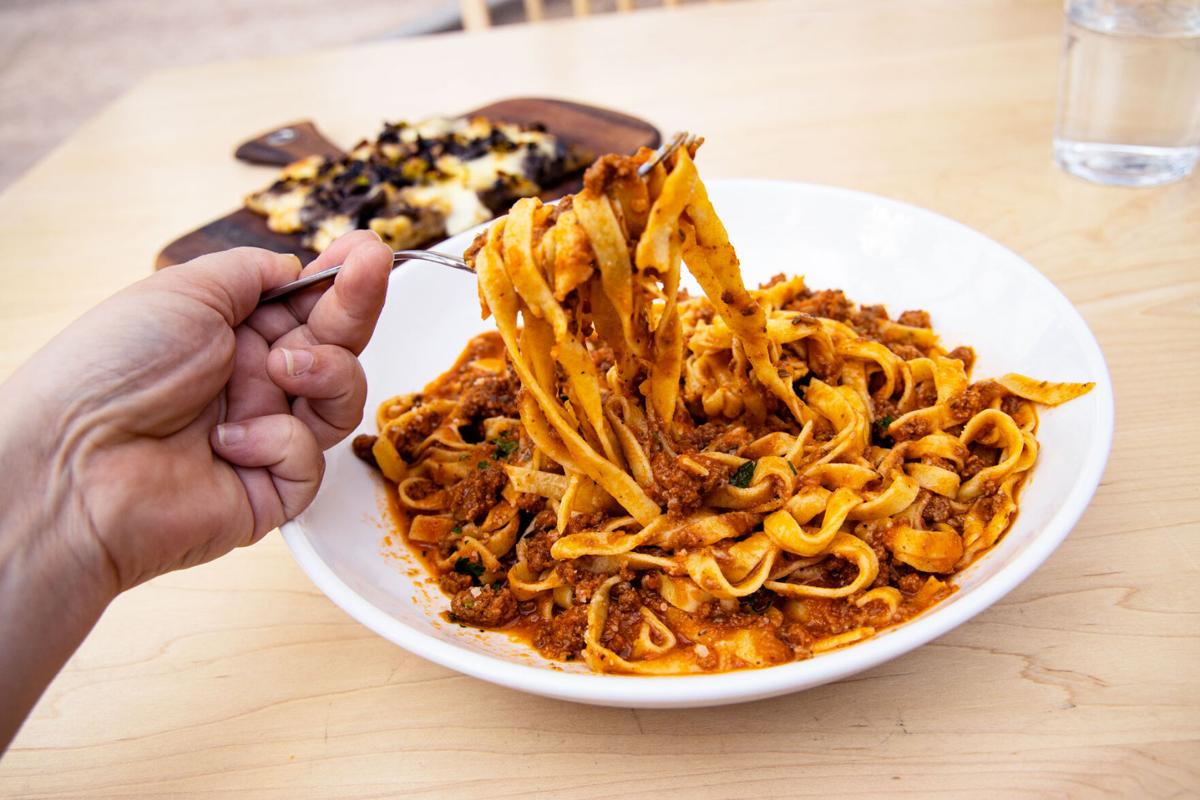 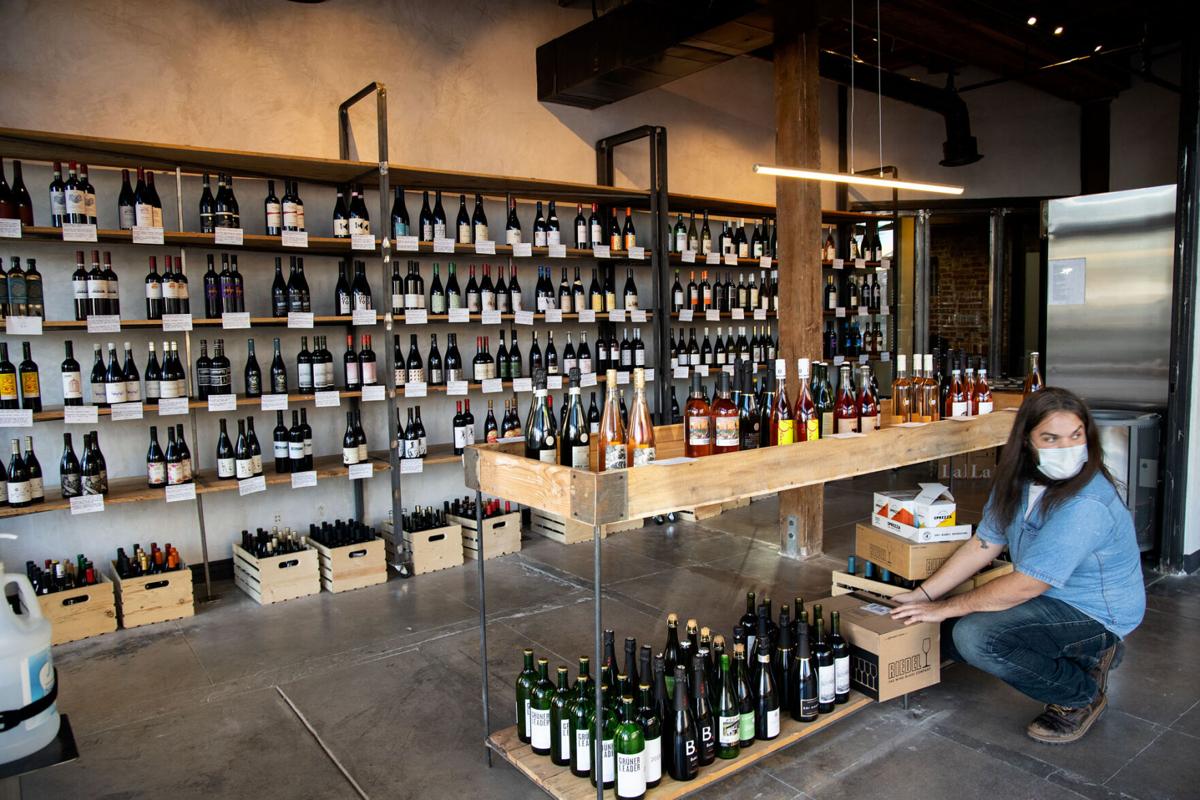 Bryan Eichhorst reaches for some glasses at his new wine shop Soif, which specializes in natural wines from small producers.

It's February everyone! Normally right now we're ankles deep in gemstones and food festivals, which make it all the more important to walk around looking at more gemstones. But this year is different. There are no food festivals, just new brunch restaurants. And somehow, we have gotten heavier.

I blame this on bubble waffles, which you can get at the new Toast 101 brunch spot where 7 Ounce Korean Steakhouse used to be. They also have regular waffles, and hash browns that are shaped into waffles! But that's not the only brunch spot that opened this month. From the El Charro folks, the new Barrio Charro is a fast-casual concept that does Mexican brunch toasts with Don Guerra's Barrio Bread. And from The Neighborhood folks, you have La Chingada. (Just look up the name, I'm not gonna say ...)

Maybe there's just something about this pandemic that makes you want a bloody Mary. Or a breakfast margarita I guess. Hold strong, folks! We're almost out of this mess. If you're able to make it to dinner without drinking, you can enjoy a bottle of wine from Penca's new wine shop, or sip some vino on the patio at Locale in the former home of Old Pueblo Grille. And yes, we've got a nonalcoholic option too. Hit up the new Transit Tea for a fruity tea soda or a tea snow.

And before you do all that, make sure to check out the bottom of this article, which gives you a rundown of all the new food concepts coming up. Despite everything, there's much to look forward to ...

Two culinary giants — Barrio Bread and El Charro Café — teamed up on this fast casual concept in the former home of Island Plate Lunch on Campbell. Don Guerra provides his award-winning bread as the base for brunch dishes and some Mexican sandwiches like the Pueblo Quesabirria with queso Oaxaca, beans and consommé dip. Barrio Charro is fashioned like a little market that sells local goods, with Don's bread in the back and a patio out front. My initial favorite was the Barrio Santa Rosa (many of the dishes are named after Tucson neighborhoods), an avocado toast that features Don's pan levain with a hefty smear of ripe avocado with pink onions and Mexican cheeses. The Broadmoor Melt was also a decent burger, if you're there for lunch. Read more.

The cheekily-named La Chingada Cocina Mexicana is a downtown brunch spot by the owner of the popular southside sports bar The Neighborhood, known for having some of the best micheladas in Tucson. Manuel Daniel Cordova designed the interior of the Scott Avenue restaurant himself, creating a colorful mix of warm woods and intricate Spanish tile patterns. I hung out on the patio this weekend, sipping housemade Mazapan horchata out of a decorative Frida Kahlo mug. The chilaquiles divorciados are an early standout, with juicy strips of ribeye steak in between the saucy tortilla chips. I also really enjoyed the quesabirria Mexican pizza (pictured at the top of this article), but make sure to bring a couple folks to share it with, because it's big. Read more.

The vintage farmhouse that once held Old Pueblo Grille is getting new life this year as Locale, a restaurant by Contigo owners Deborah Tenino and Nick Kreutz. The new concept signals Tenino's return to Italian food, her first culinary love and a place she spent nearly a decade in during the '90s. The restaurant has a sprawling outdoor patio where I enjoyed a plate of homemade tagliatelle egg noodles in a meaty bolognese sauce. They're also doing Roman pizzas "al taglio" or by the slice, which makes them perfect to share with the table. I tried the "foraged" variety, which featured wild mushrooms with a creamy Taleggio cheese and a hint of truffle oil. Both of these dishes were extremely rich, so you might want to order a salad to share as well. Read more.

Bartender Bryan Eichhorst and Patricia Schwabe from Penca have opened a stylish wine shop next door to the Mexican restaurant in downtown Tucson. Soif, which refers to an unpretentious wine meant to be drunk with friends, carries natural wines and products from small winemakers who respect the land. While the term natural is more of a method than a flavor, these wines can taste, "more alive. They change as you drink them, and might have a different flavor each time," Eichhorst said. The bottles are mostly in the $20 to $30 range, but you can also find anything from $10 to $100. Attracted to the striking Miro-style label, I picked up a $16 Spanish blend called Azimut Negre, and am excited to uncork it at home. Soif also carries a nice selection of sherries and vermouths, if you're interested in the world of fortified wine. Bonus: They do same-day delivery for $15.

This trendy brunch spot Toast 101 is probably going to be a hit, judging by the early crowds during its grand opening this month. You can say it has star power: Co-owner Kalvin Jarvis is a local singer who recently competed on "The Voice" under celebrity coach Adam Levine. He and partner Amanda Kim redesigned the former 7 Ounce Steakhouse to give it a light brunchy look, and have packed the menu with trendy items like bubble waffles, fruity cereal-coated French toasts and a whole section of sweet and savory breakfast toasts. I stopped by during the opening and sat on the patio with a chicken fried steak, which had hash browns that had been pressed into a waffle iron so they looked like mini waffles. More than anything, I really enjoyed their pickle bloody Mary, because it was perfectly balanced and not a vodka or tomato explosion.

This ain't your regular tea shop. First of all, it has a drive-thru, which is fitting because it's right on Speedway where you're probably driving all thirsty and such. Transit Tea is the kinda place you swing through and grab a tea soda, a fruity concoction of iced tea, soda water and fruity syrups, which make it taste almost like an Italian soda. They have more than two dozen varieties of these refreshing drinks, in addition to tea lattes, various chais, plain tea and a slushy-like drink called a Tea Snow. The shop is owned by Manish Shah of Maya Tea, a Tucson-based tea export company that specializes in chai concentrates. While I was at Transit Tea, Manish recommended I try the Joyride tea soda, with a base of hibiscus tea and white peach and cranberry syrup. I was parched at the time, and it was so fruity and light, it tasted tea-licious!

• A sign advertising Santorini Greek Cafe has gone up in the stripmall spot at 2545 E. Speedway that has held multiple different fish and chips restaurants. The restaurant is next door to the former Alibaba Mediterranean, which closed over the summer.

• Travis Peters of The Parish teased on Instagram that he's opening a second location for his Southern fusion restaurant. While he hasn't announced a space yet, he clearly has the keys, judging by this photo.

• The folks at Prep & Pastry are getting closer to opening their restaurant and grocery store concept in the old Rincon Market. Chef Kyle Nottingham recently posted a picture of the meat counter on Facebook, saying that Flora's Market Run was "opening soon!"

• The owners of The Downtown Clifton Hotel and Sand-Reckoner Vineyards are partnering together to open a wine-centric boutique hotel in downtown Tucson, writes Cathalena E. Burch. The concept is going into the old Tucson Citizen building at 485 S. Stone Ave., which housed the paper from 1913 to 1940. The new hotel will be called The Citizen.

Rigo's Restaurant had been on South Fourth Avenue for more than 20 years. The owner was forced to close after he fell behind on rent payments and went into foreclosure.

Banhdicted is a new sandwich spot that opened next door to the Lee Lee International Supermarket on Orange Grove. The restaurant serves almost 20 varieties of milk tea, smoothies and more.