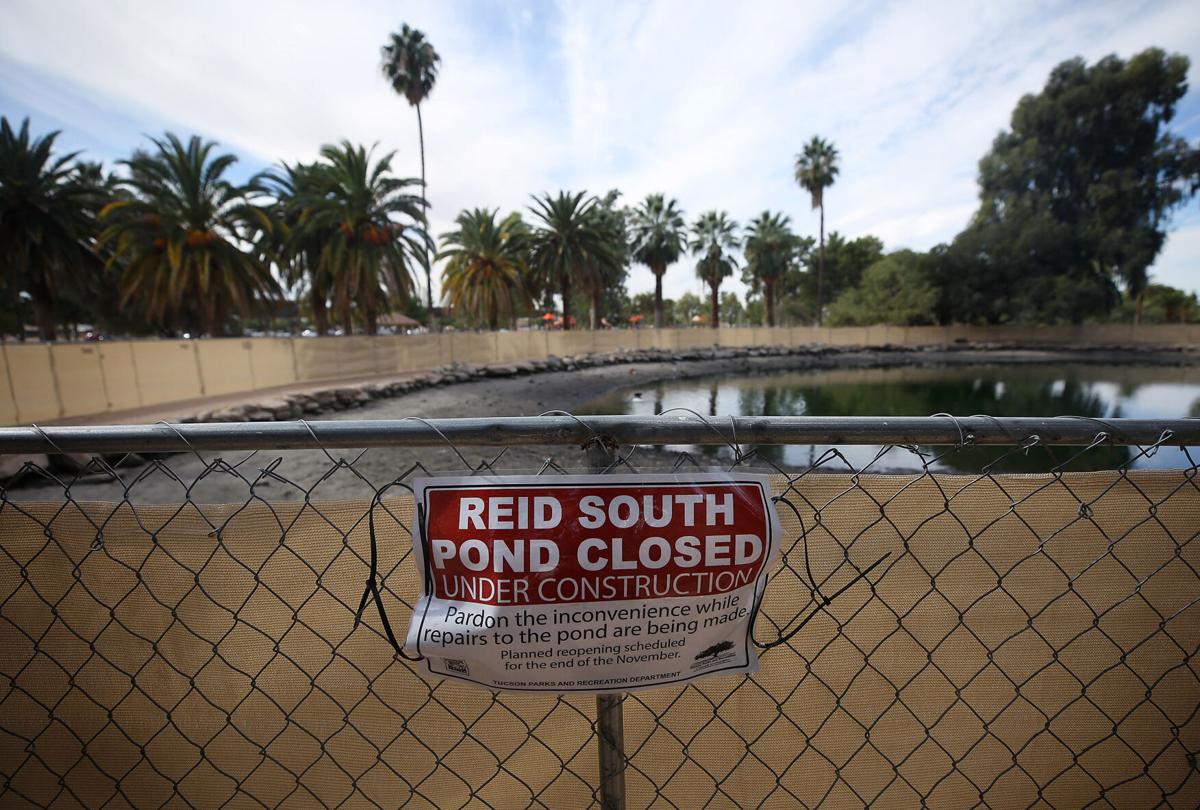 Recent soil testing of Reid Park's south pond meant some of the water had to be drained and the area was fenced off. The pond will be refilled and fencing is expected to be removed by Monday, Nov. 16 and it will remain open until construction on a 3.5-acre expansion of the Reid Park Zoo starts in 2021. 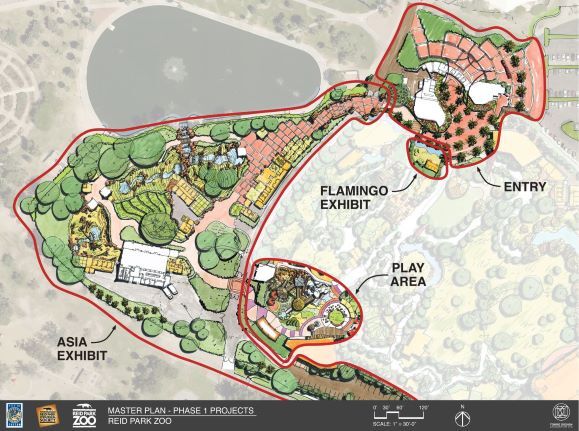 A rendering of the Reid Park Zoo's Asia Exhibit expansion and relocation of the flamingo exhibit and new play area.

The Reid Park Zoo is getting ready for a big expansion adding more acres to its property and new habitats for animals native to Asia including red pandas, Malayan tigers and sloth bears. Oh my.

The Pathways to Asia expansion is part of the first phase of the zoo's 10-year master plan and will extend the zoo's footprint to include 3.5 acres currently part of Reid Park. The expansion will cover the area where the south pond, the smaller of two ponds at the park, currently sits.

Recent soil testing of the south pond meant some of the water had to be drained and the area was fenced off. The pond will be refilled and fencing is expected to be removed by Monday, Nov. 16 and it will remain open until construction begins in 2021.

The temporary closure of the pond has sparked concern from the community about the expansion plans and its impact on the park and wildlife who live in the pond. A change.org petition to save the duck pond has received more than 11,000 signatures from people critical of the expansion for removing free green space accessible to the entire community, destruction of the pond which is home to several ducks and turtles and citing a lack of transparency from the zoo and city about the plans.

The Arizona Daily Star has previously reported on the expansion, other projects that have been completed during this first phase of the zoo's master plan and the sales tax increase passed by voters in 2017 that brought in more funding for the zoo for much-needed repair and upgrades to existing infrastructure and expansion projects. The zoo has also said its met with several community groups and hosted more than 100 presentations about the expansion and its plans.

Here are a few things to know about what you can expect when the expansion is complete and what to expect when work begins.

What's part of the Pathways to Asia expansion?

The expansion will focus on showcasing the diversity of animal species from the continent including mammals, reptiles and birds.

Nancy Kluge, president and CEO of Reid Park Zoo, says the zoo is hoping to do for Malayan tigers what it did for its elephant herd, giving them five times more space than the zoo previously had in its tiger habitat. She says the species is highly endangered with only about 300 Malayan tigers left worldwide and the new habitat will be designed to be able to breed tigers.

"The idea is that we would bring in breeding pairs to be able to breed more tigers so it is built to accommodate up to five tigers with different spaces so they can separate or be together," she says.

A few years ago the zoo brought in red pandas temporarily in the winter and they were super popular among visitors. They'll be added to the zoo's permanent collection in the new expansion.

Other additions include muntjacs (a species of small deer), siamangs (a type of gibbon monkey), fishing cats and different types of birds native to Asia.

The zoo will add a reptile house which will be home to a Komodo dragon, reticulated python, different tortoise species, lizards and fruit bats, giving visitors the chance to see these oft-considered creepy creatures in a new light.

"Certainly that's our goal with the reptile house is for people to be able to see that these reptiles that have a reputation for being scary are actually fascinating creatures that are also intelligent, have fascinating adaptations that they have to live in the environment they're in and to really appreciate them and to match that with how they can protect reptiles not only in the world, but right here in the Southwest desert as well," she says.

How the expansion will affect Reid Park

The zoo's expansion will be built on 3.5 acres currently part of Reid Park, west of the zoo across Lakeshore Lane. The park's south pond, the smaller of the two ponds at the park, is part of the expansion area and will be filled in. The expansion will also be built on part of Barnum Hill.

"The north pond will stay there and we are also working on a new pump station for that with (Tucson Parks and Recreation) to improve the water quality," Kluge says. "We'll be rebuilding the waterfall which will remain on the public side, and as we get into those details we're working closely with Parks on what that public side looks like to make sure it's enjoyable as well."

A portion of Lakeshore Lane, which separates the current zoo footprint from the park, will also be built over just north of 22nd Street. Cars will still be able to turn on to Lakeshore Lane from 22nd Street to access the parking lot on the south side of the park.

When will the expansion be complete?

It's gonna be a while.

Construction on the expansion is set to begin in the spring of 2021, so you still have some time to visit the south pond, and add some photos to your memories.

The expansion is projected to be completed by early 2023.

What about the ducks at Reid Park?

Several ducks make their home in the north and south ponds at Reid Park, and they frequently make their way into the zoo too, says Kluge. She says making sure they are cared for and comfortable is a priority.

Kluge anticipates that when the south pond is closed the ducks will walk or fly over to the the north pond and continue to frequent the zoo, which will have water features in many of the new animal habitats in the expansion.

Starting in January, the zoo will begin relocating the flamingo exhibit from its current location to an area near the front entrance.

A new play area for kids called the World of Play Adventure Zone focusing on the animals on different continents will be built in the old flamingo space, and should be open by the end of 2021, Kluge says.

The zoo says it will continue to post updates on its website as progress is made on the expansion and you can also sign up to receive their email newsletter to stay in the loop.

Kluge says the zoo welcomes questions and comments which can be submitted online here.

Reid Park Zoo's cute baby elephant Penzi is now 4 months old and still as playful as ever. Mapenzi and her big sister Nandi were both born in Tucson, to the delight of locals. Reid Park Zoo is still closed.

Things to do this weekend Nov. 12-15 in Tucson, Arizona including virtual events, drive-ins, drive-thrus, open-air events, at-home things to do and things to do with kids.

The Tucson vendor event Cultivate will return in 2020 with new, pandemic precautions. The holiday pop-up market showcasing Tucson artists and makers begins Black Friday and runs through the end of the year.

Sip a Sonoran Sunset on the rooftop bar at the Graduate hotel, overlooking the city lights of Tucson. Or grab some juicy brisket to-go from Boulevard Barbecue. Whatever you do, it's gonna be a great weekend!

5 Tucson ways to enjoy art outside

From mural tours to sculpture gardens and pop-up ballet performances, there are lots of ways to experience local art outside in Tucson, Arizona.

The Arizona Historical Society board voted Friday to end its operating agreements for the Fort Lowell and Downtown History museums in Tucson.

Things to do this weekend Nov. 18-22 in Tucson, Arizona including virtual events, drive-ins, drive-thrus, open-air events, at-home things to do and things to do with kids.