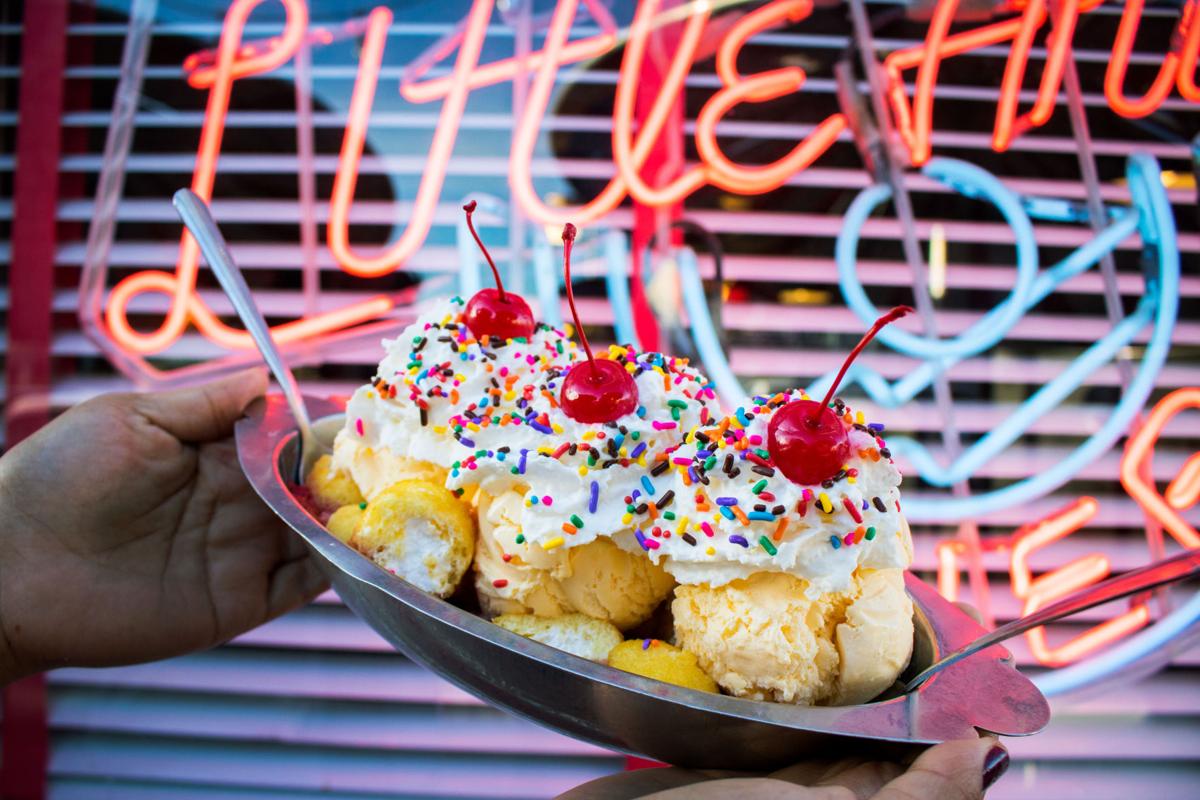 There are Twinkies nestled underneath this ice cream sundae at Little Anthony's. That is all you need to know. 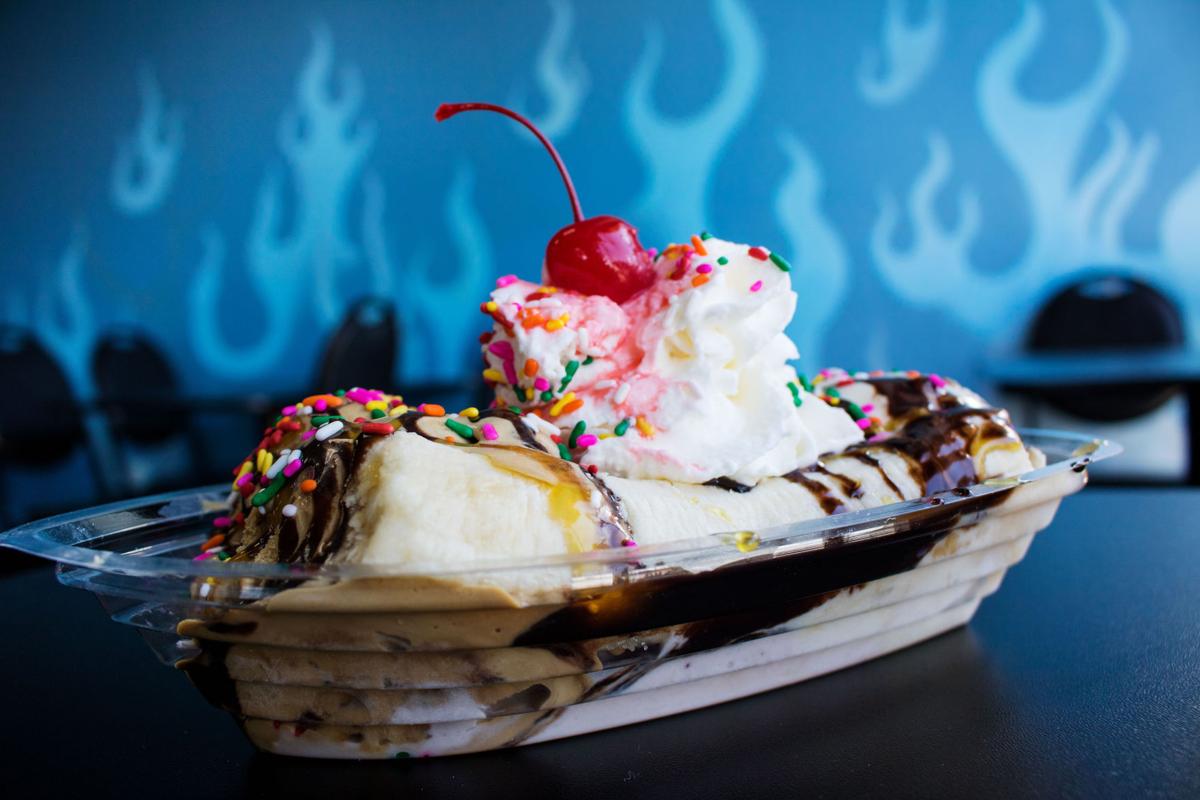 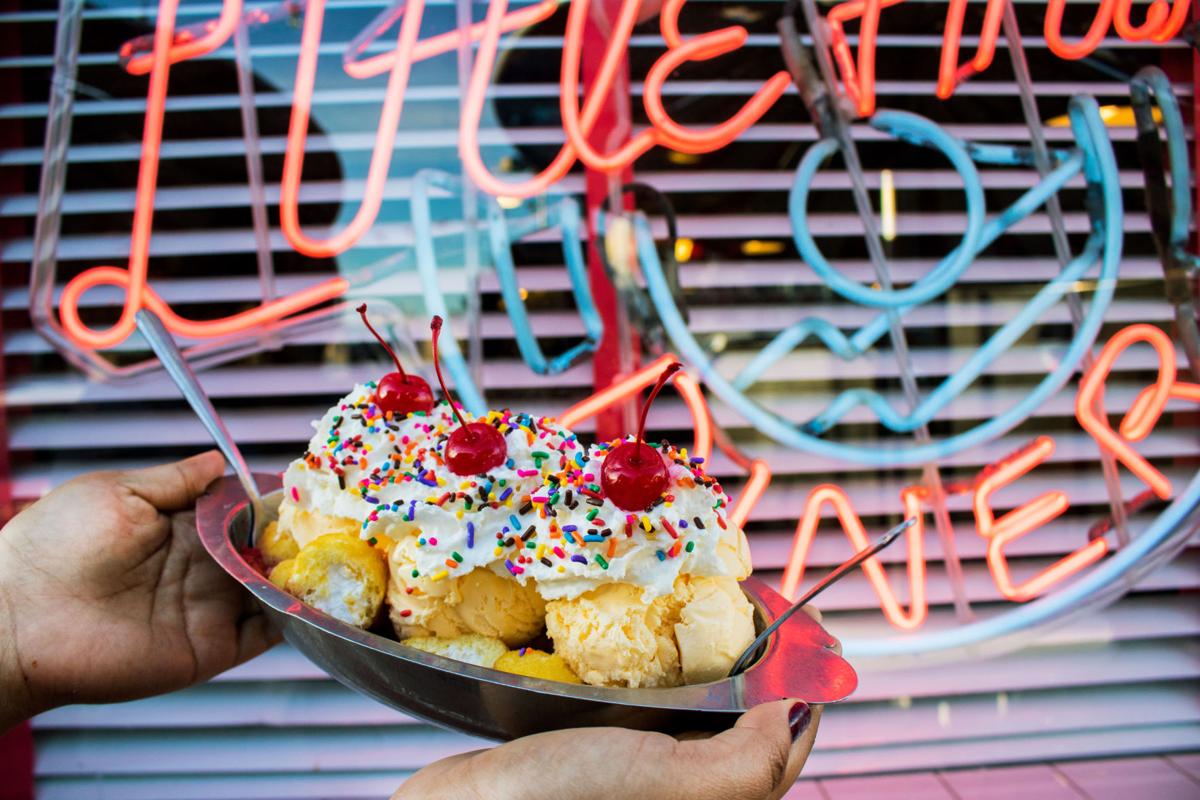 Little Anthony's Twinkie Delight, $5.29. It's not quite artisanal, but the universe is just a butterfly's fart anyway. So who cares! 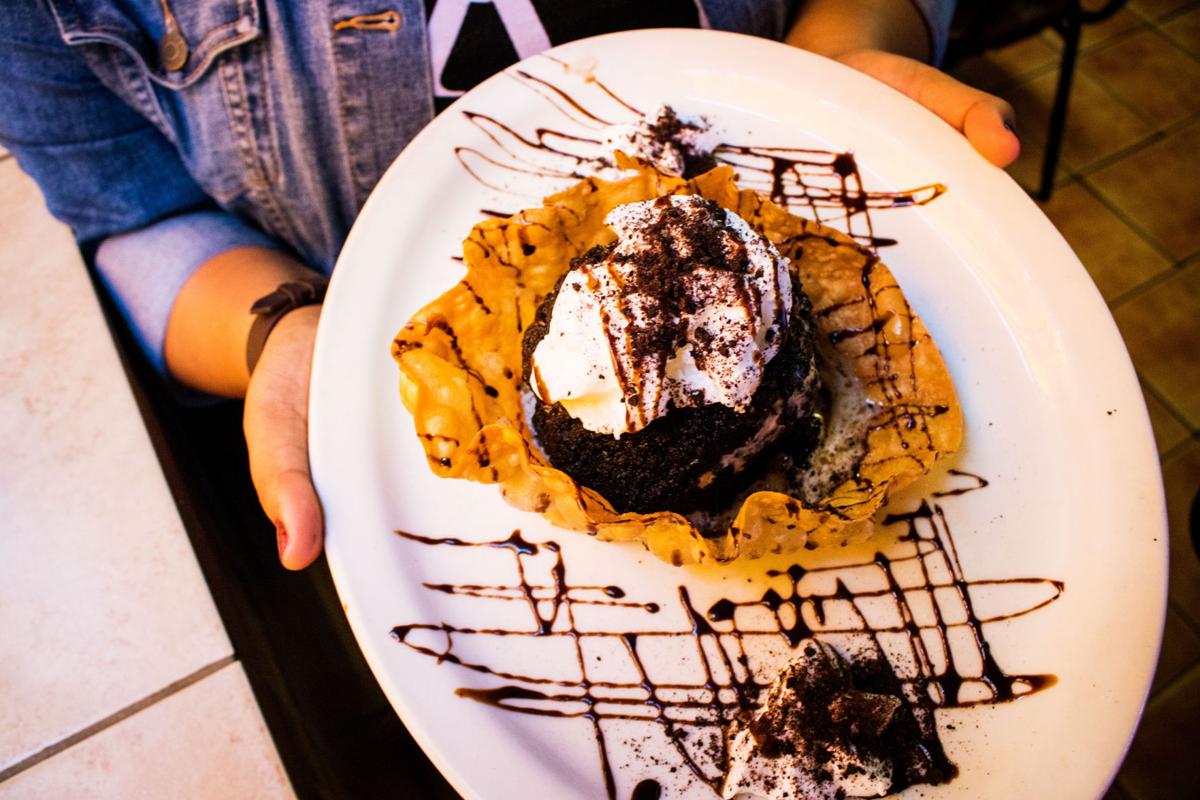 El Sur kicks up the fried-ice-cream game a notch with this Oreo doohickey, $6.50. 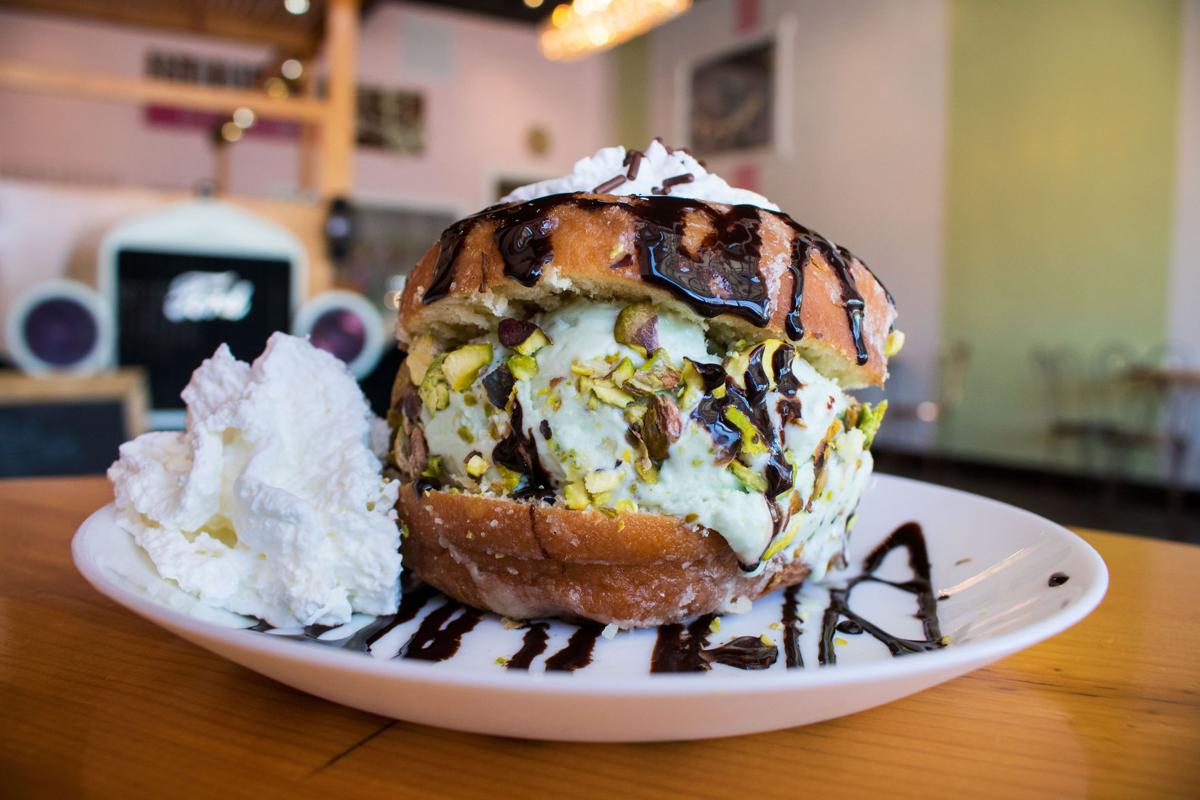 Kristel Johnson uses all natural ingredients in her homemade ice cream flavors. For example the pistachio in this fro-nut, $6, is colored with spirulina powder. 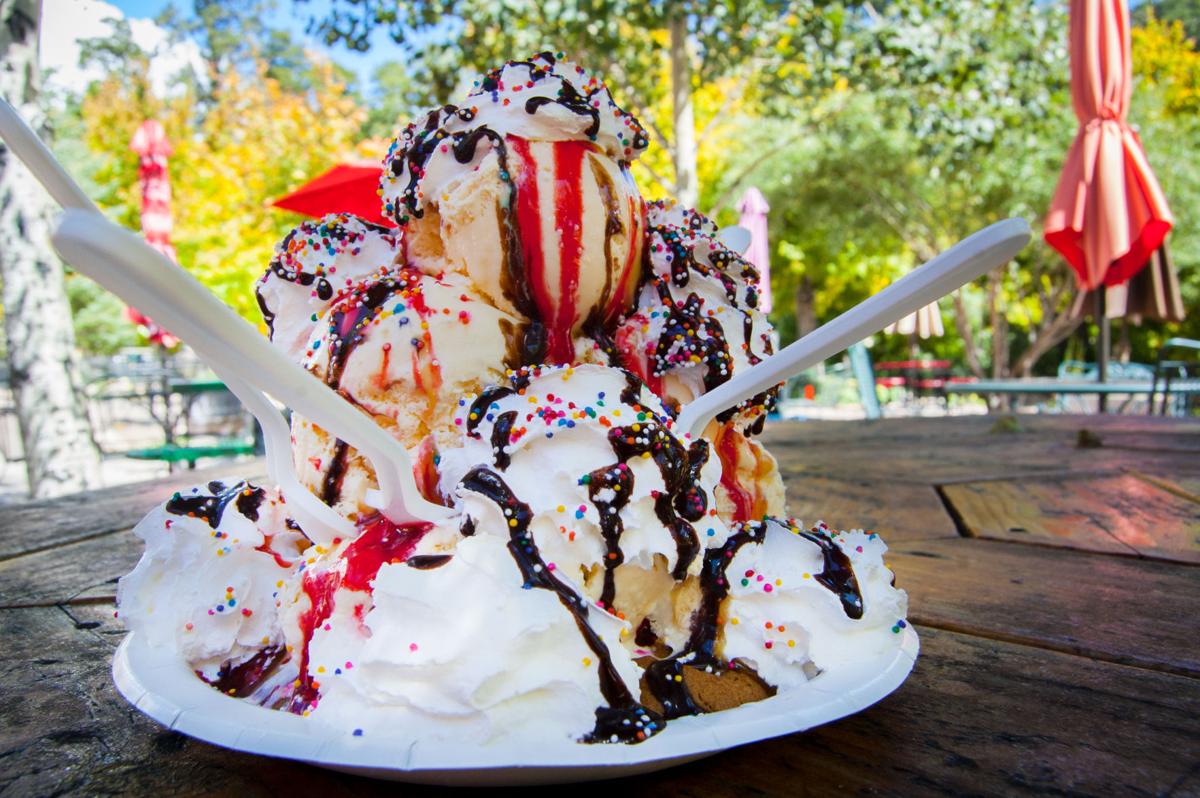 There are six scoops of ice cream as well as a giant cookie underneath in this crazy show, $12. 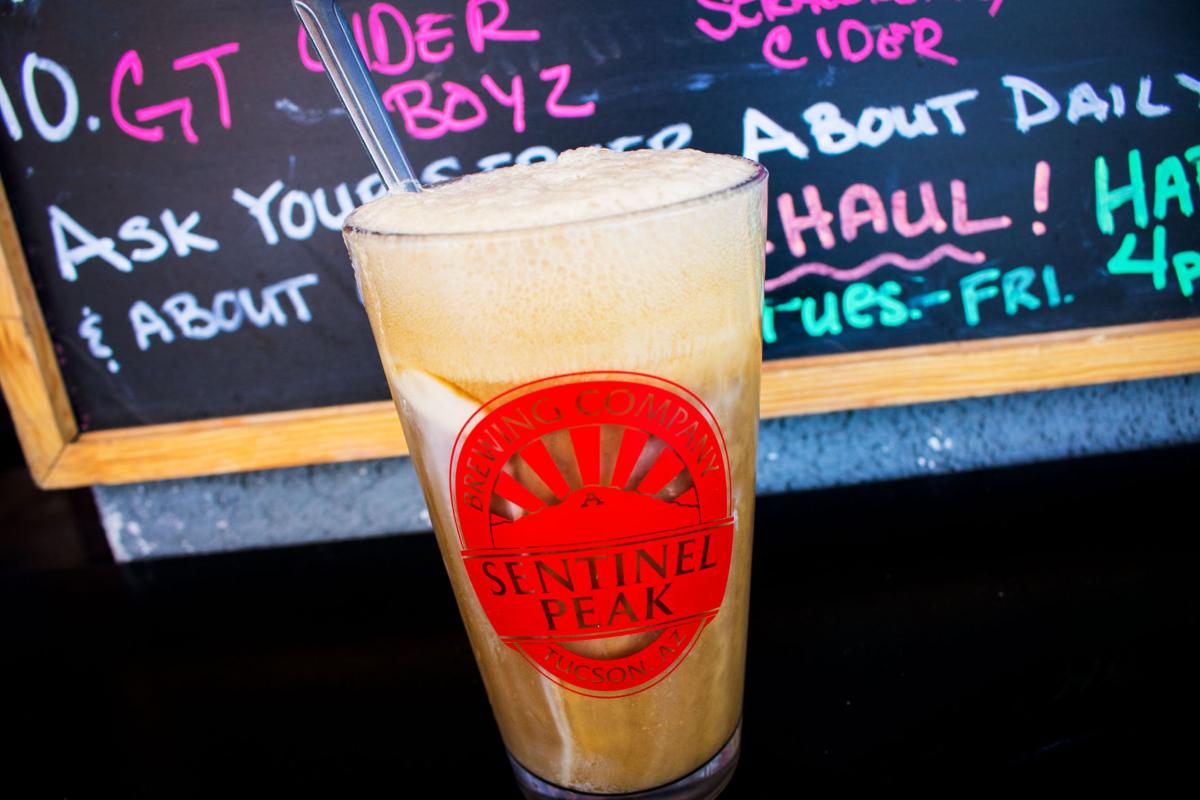 Sentinel Peak will put French vanilla ice cream in your Dewpoint Dunkel for $7.79. 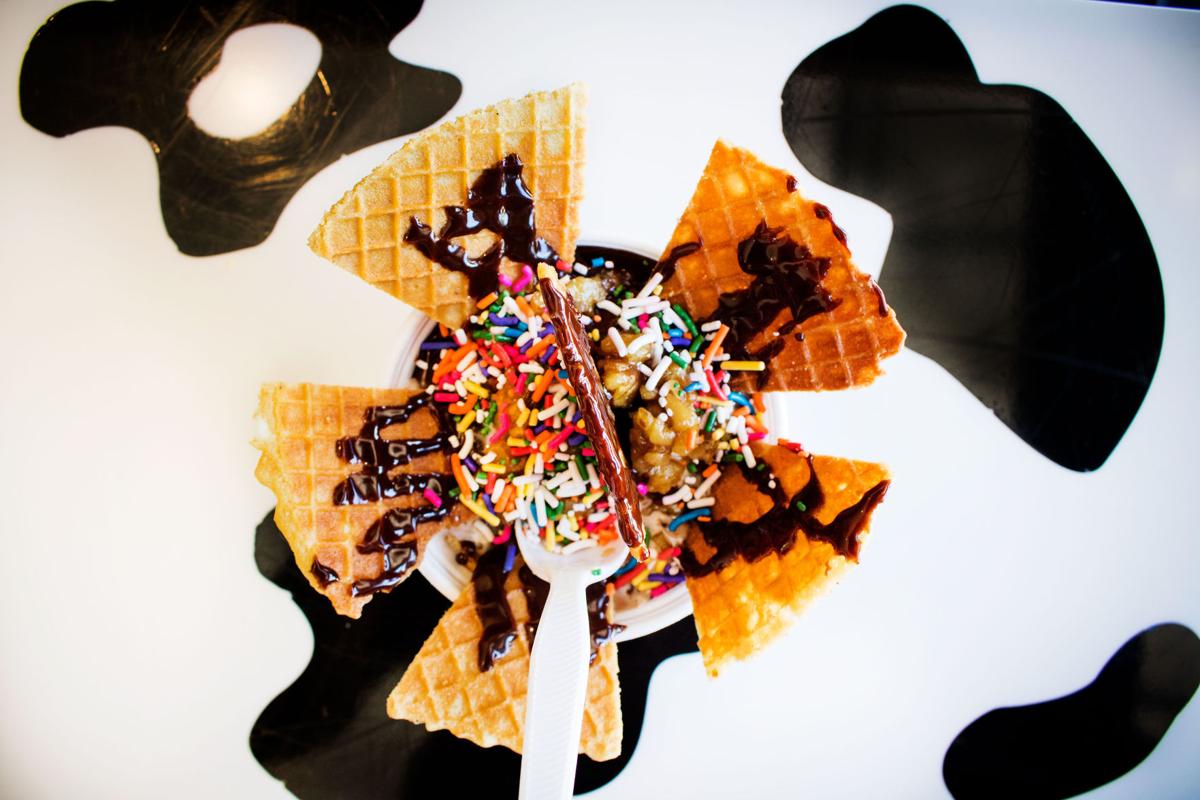 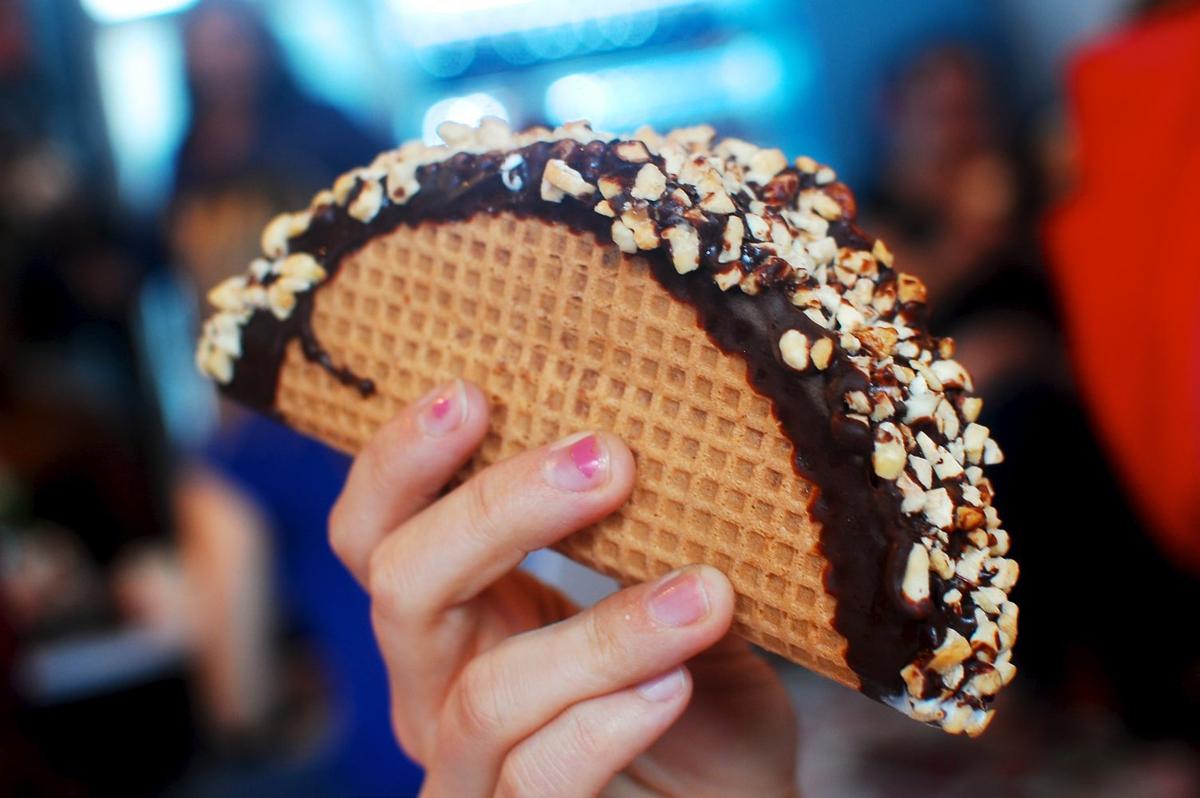 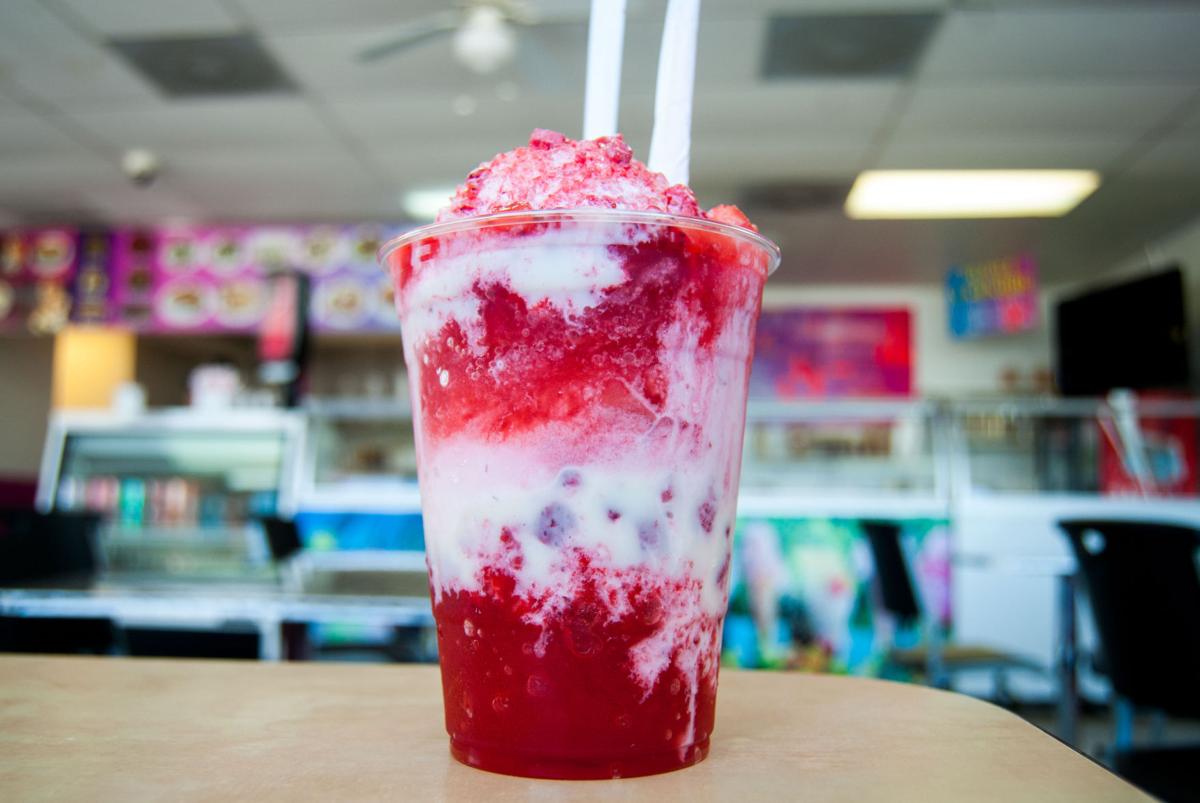 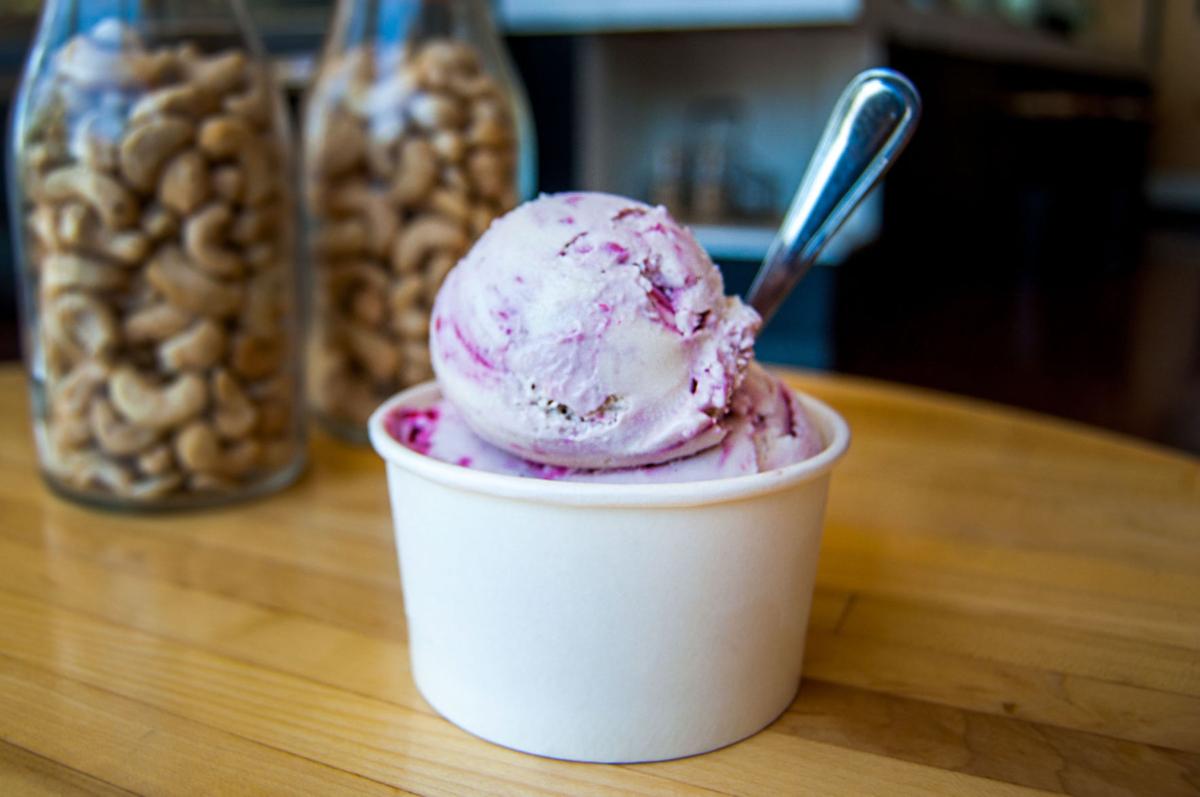 Cashew Cow’s raspberry ‘ice cream’ is swirled with a housemade fruit puree that tastes like fresh fruit and cream. 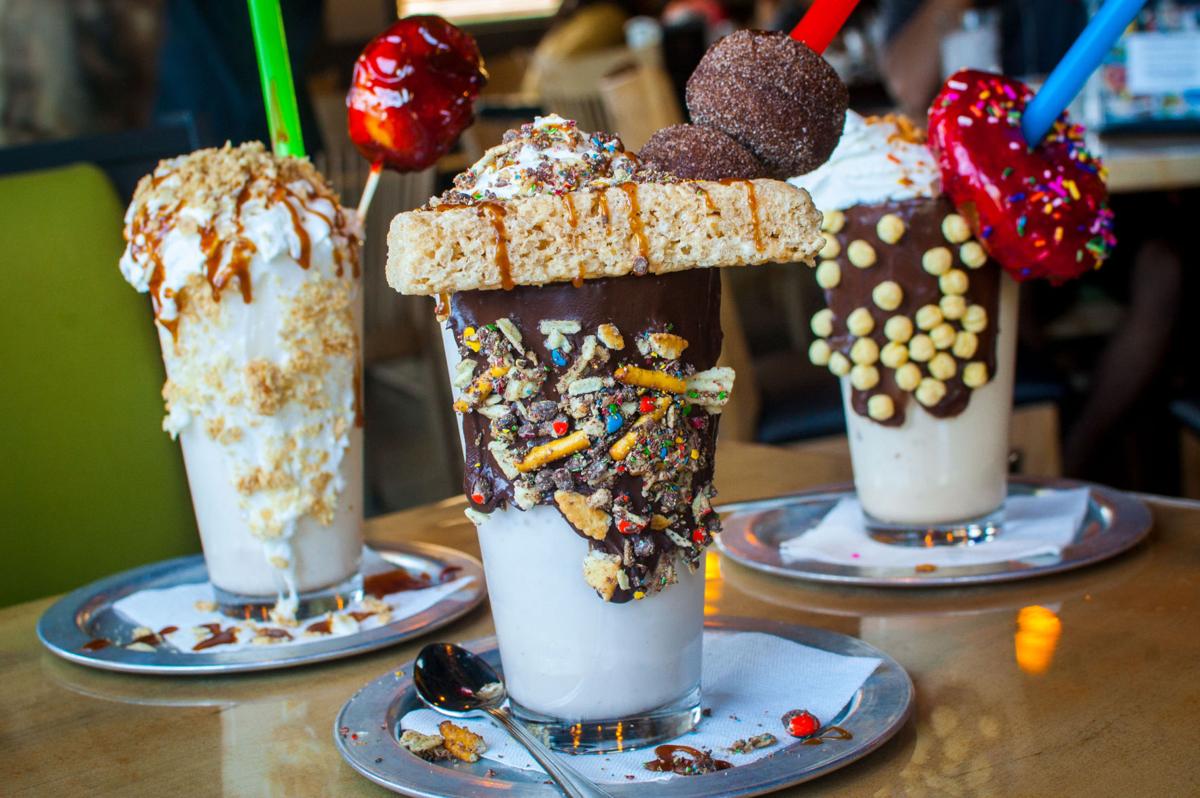 Zona 78's milkshakes from left to right: The Apple Pie with a housemade candied apple, The Munchies with doughnut holes and a Rice Krispies treat, and the Donut shake with Butterfinger crumbles. 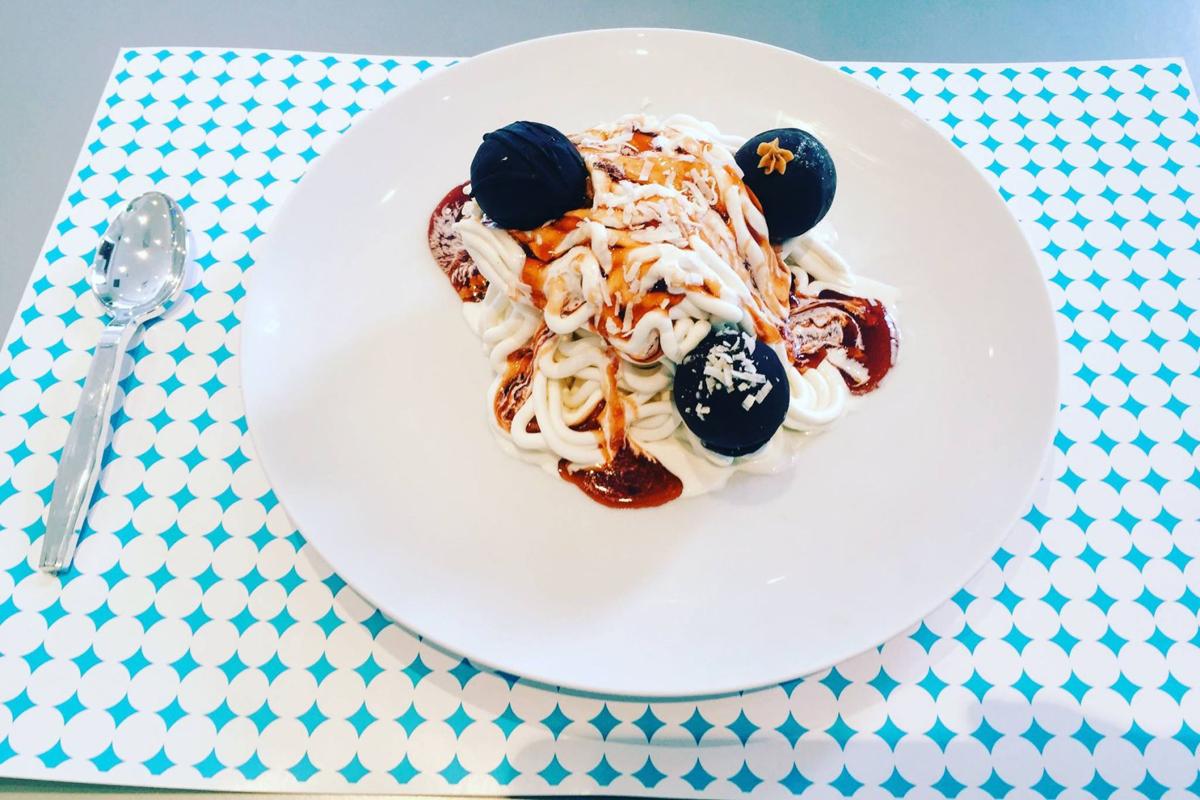 Spaghetti gelato looks like something you'd eat in space, but it's actually made fresh to order. 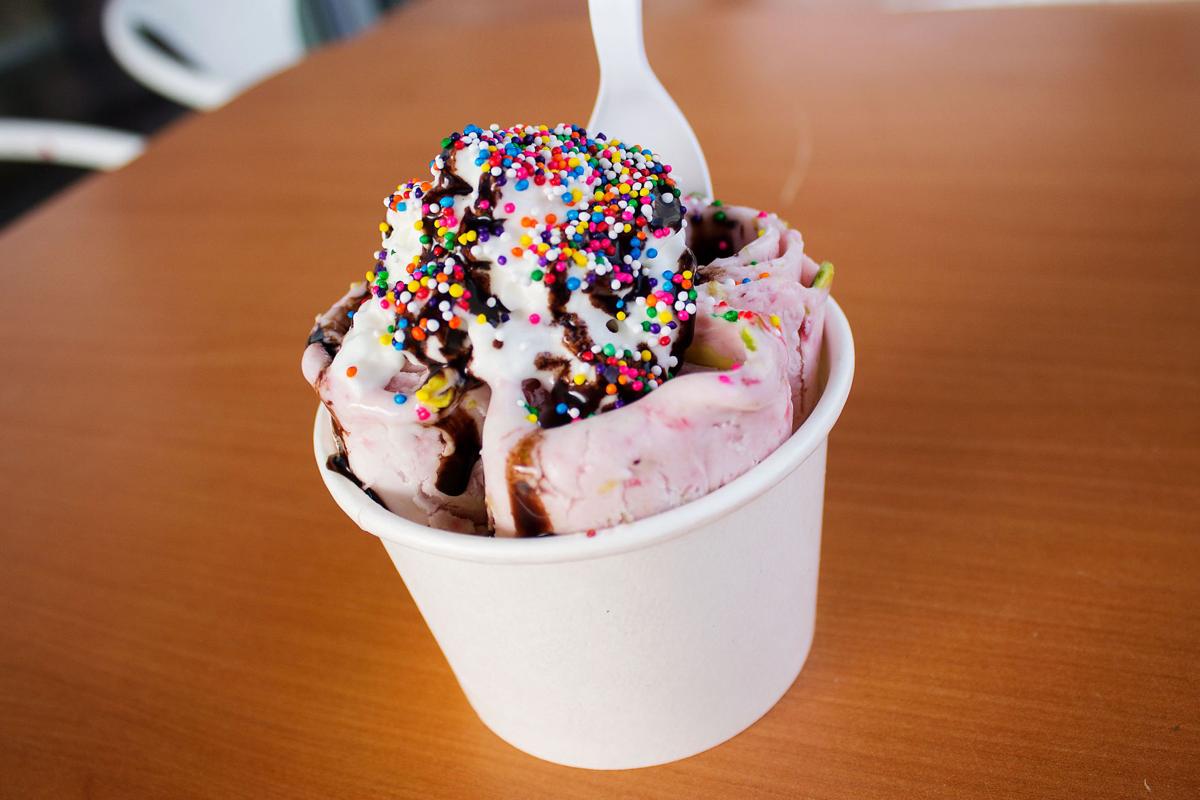 Must we write an introduction here? Here are some of our favorite ice cream creations around Tucson. Maybe you can take a clipboard or something and write little notes about each one? Whatever floats your boat. But seriously, it's like a million degrees already, so stop fussing around and let's do this thing!

Exhibit A, we have a bunch of pistachio ice cream nestled inside a doughnut from La Estrella Bakery. Why somebody would create this in the first place, I am at a loss. But here we are, looking at this oddity. And wanting it again. Even though we might have just eaten a face-full yesterday.

The kids can get the housemade root-beer float. But all of us lucky people who just so happen to be 21 may order the Munich-style Dunkel beer. The creamy vanilla just adds to the rich malty flavor, and balances the bitter. Pretty good nightcap, if I do say so!

They do crazy things with fried ice cream on 22nd Street, apparently. This one is covered in Oreos and nestled into a taco salad shell. That part is a little salty, but I like that. It balances the intense sweetness from all the ICE CREAM AND COOKIES you're consuming!!!

Okay so this new restaurant on South Twelfth Avenue specializes in TAQUITOS!!! And it has a #cochi pig ice cream sandwich! INSTANT CLASSIC!!! Check out our story for more info. 🌵🌵🌵 #tucsonfood #mexicanfood #mexicancuisine

A big blog of Thrifty's ice cream sandwiched between a Mexican pig pastry. Is this the essential Tucson dessert? Rollies Mexican Patio on South Twelfth also has a concha ice cream sandwich with a pink shell pastry. It's a little easier to handle, and so pretty we just wanna crawl in our shells and hide!

I just like these. And it's nice when the ice cream is homemade, and you can taste things besides chemicals. Brushfire has a lot of different flavors but the best was recommended to me by a nearby 5-year-old: peanut butter cookie dough. Does anyone still think adults are smarter?

We came for the "World's Smallest Sundaes," which to our chagrin have been upgraded to fill an entire cup now. That's okay, we'll settle for this sundae with stawberries and Twinkies?! Shortly after, we learned about The Wipeout with 12 scoops of ice cream and a nightmare of clownish ingredients on top. Too bad we missed that one!

This sounded disgusting at first. But the spaghetti isn't really spaghetti. It's just gelato that comes out of a pasta machine. And the meatballs are not meatballs at all, but little balls of gelato dipped in dark chocolate. I feel like the Italians might be mad about this one. Oh well.

I apologize to all the parents out there who accidentally showed this picture to their children. I do not recommend eating this at all. But it'll probably happen anyway. So sorry about that. But in the spirit of journalism, it must be documented. My advice, focus on the whipped cream. It's, you know, lighter ...

Finally an answer to the eternal question, ice cream or nachos? This creation allows you to have your nacho dessert and eat it too. The "chips" are actually homemade waffle cones, and the "nacho cheese" is hot fudge. Also, the ice cream is grassfed and pasteurized in-house. It is by far, the best you will eat around here.

Hub makes all sorts of droolworthy creations, but the gourmet Choco Taco takes the cake. There is crunchy, there is creamy, there is waffle, there is chocolate. All the flavor groups. Plus, you can eat it with your hands, and there are no creepy ice cream truck dudes wandering around.

Once you have ordered your raspado with ice cream, it is hard to get anything else ever again. There's just something about cream and frozen sugar fruit, that taste so good together! I love the airy vibe at Michoacán Taqueria, but you can get decent raspados con nieve all over town.

You would never know this ice cream is made from cashew milk. It's just that creamy. But Jennifer Newman does an excellent job enhancing the peanutty flavors of the vegan milk substitute, with the help of yummy toppings like raspberries, cookie dough, lemon poppyseed and more.

This is for those who prefer their desserts instantly frozen and rolled up into thin sheets of crystal ice. Then topped with gummy bears of course. Because why not? If you've never had Thai ice cream before, it's about time to try. Here's a primer ...

Maximalism is the lay of the land down here in the Old Pueblo, where you can get your milkshakes topped with not only donuts but rice krispies, caramel apples and different varieties of cereal. Remember, breakfast is the most important meal of the day.

8 things to do for Mother's Day that aren't brunch

Tell her you love her.

The best vegan 'ice cream' is made with cashews

Say "hallo" to The Dutch! It's replacing Wilko after 10 years

We break down the menu, which has some interesting dishes from the Netherlands.

Would you eat these ridiculous milkshakes with cereal and donuts?

You're gonna miss our burritos, wherever you're going ...

The team has a "fermentation locker" built above the bar area.

Amy's Donuts is going into the former Little Luke's spot on Fort Lowell.

Casa Vicente is closed all summer for renovations

But fear not, we have three alternatives for you to get your sangria fix.

It will live on in our imaginations.

We went fishin' for 5 great poke bowls in Tucson

When you're craving sushi but don't got the moola, this is where you go.

This little Tucson cocktail is going to Paris, the food capital of the world

The French will drink Sotol, from this Tucson restaurant.

Amy's Donuts is open, so go get some candy-covered goodness

Amy's Donuts is open, so go get some candy-covered goodness. We're now in doughnut heaven: 24 hours a day, seven days a week.

It's been so hot in Tucson this week. How hot you ask? Enough to fry an egg on the sidewalk? Nah. Enough to bake some cookies in your car? Pro…

Downtown's Hub and Playground close for month of renovations

Hub and Playground Downtown close for month of renovations

Hub is open downtown after a monthlong renovation

The food menu is the same, but there are two new cocktails.

6 party-worthy cocktails made with Eegee's

We don't suggest doing this in the car. But maybe you've got a pool party coming, houseguests, dessert plans or a leftover "party pak" sitting…